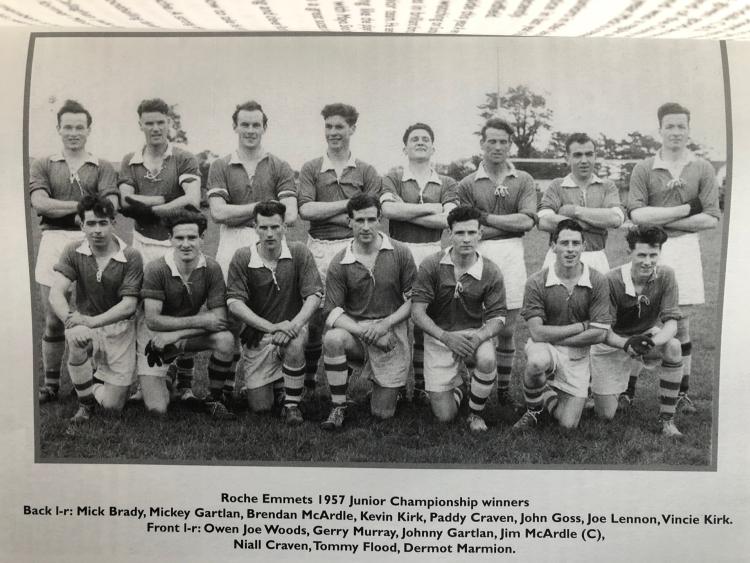 The Roche Emmets 1957 team, that defeated Glyde Rangers in the junior championship final.

With the conditions all against good play, Roche Emmets and Glyde Rangers served up a very interesting hour’s football in the county junior championship final at Ardee on Sunday.

Dominating most of the second half the Emmets ran out worthy winners by 0-6 to 0-3 to take home the Christy Bellew Cup which just eluded them the previous year.

Glyde tried desperately hard to save the day - particularly the defenders - but they lacked uniformity and the speed of the Roche side who, in fact, should have won by a bigger margin.

One of the reasons why the dividing margin was not greater was the brilliant play of Leo Daly in the Rangers full-back position. This young footballer has given several very pleasing exhibitions over the past few seasons, but this surely was his best.

Roche took quite a while to settle down, but once they got going, the Rangers challenge weakened. A big factor in their success was the switching of Brendan McArdle from full-forward to midfield to partner Mick Brady.

JIM MCARDLE RETURNS
The inclusion of Jim McArdle at centre-half probably meant the difference between victory and defeat as far as the north-Louth side was concerned.

The county player (whose first game this was since the semi-final against Tyrone in August) was a commanding figure in a defence that gave nothing away. He fielded very well, and kept an eagle eye on the dashing Joe Mackin. One must also pay tribute to McArdle on his grand clearances. They were always lengthy and crisp, and often times turned defence into attack.

Wing-halves OJ Woods and Johnny Gartlan gave him ideal support, especially the last mentioned who struck his best form in a long while, in this game. Vincie Kirk, at full-back, policied Owen Moran very effectively, while Paddy Craven and Joe Lennon as the flankers, were seldom beaten. The veteran Joe was in his brightest form in the second half.

Although sometimes inclined to kick rather wildly, Brady was a trojan worker at midfield where he completely subdued Glyde’s Patsy Callan in the second half, while in a forward division that finished rather feebly on occasions, Mickey Gartlan, on the 40 was the main danger.

There was a great duel between himself and Dick Kelly, and it was only in the last quarter that the Emmets player established any kind of pronounced superiority. Brendan McArdle did better at midfield that full-forward, while of the wingers, Niall Craven saw more of the ball than Dermot Marmion, but lost marks through delaying his centre. G Murray (on the left) was more effective at corner-forward than T Flood.

MORAN HELD
The fact that sharp-shooter Owen Moran was well held took a lot of the sting out of the Rangers attack. Centre-forward Mackin, too, had few real chances but it is to his credit that he never gave up trying. Recalled to the side after a long lay off through illness, Dan Kelly (left corner) found the pace against him, while P McCabe, in the other corner, was unable to master Joe Lennon.

Young Kevin Dullaghan did some clever things, while Tommy Byrne was a very earnest worker. Paddy Morgan, despite a heavy knock, was often in the picture at midfield, while Leo Daly was far and away the outstanding figure in a grand defence.

Others to show up well hereabouts were Kieran Nevins and Paddy Matthews. L Crawley did very well to keep his goals intact for the hour.

THE GAME
Although a Flood free gave Roche the lead, Glyde hit back with Moran (2) and Dullaghan on target, only for Mickey Gartlan and Marmion to level for Roche at 0-3 apiece at half-time.

But Emmets struck the only points of the second half, through Murray, Craven and Gartlan.