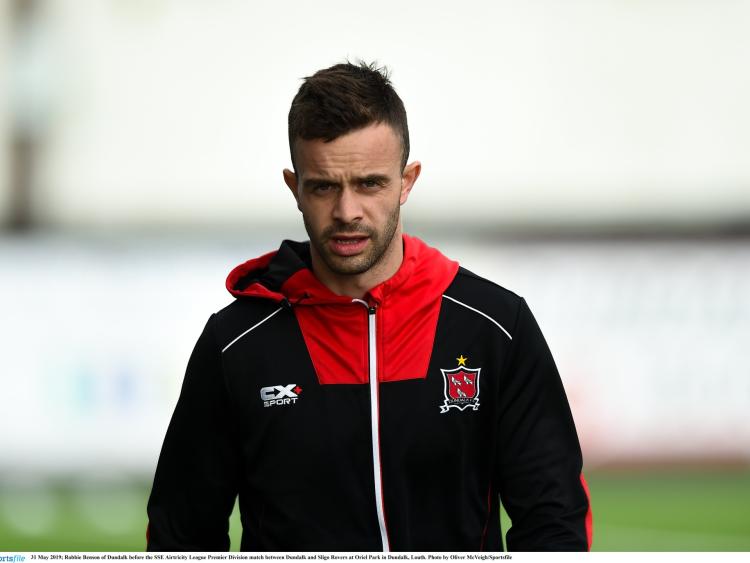 Robbie Benson has brought down BATE Borisov and stunned the Polish Army Stadium with Dundalk FC’s best-ever European strike. But it is 12 months earlier – against then little-known Luxembourgers and one Slovan Bratislava – that sits proudly amongst his most treasured moments.

Benson was then at UCD, a club and college he speaks glowingly of. Football earned him a scholarship at the University, where – alongside playing League of Ireland – he studied Maths and Actuarial Science, guaranteeing him a lucrative career when he hangs up his boots.

It was his final summer there where he feels he gave something back to UCD, and that, he says, “meant a lot”. Benson was captain when The Students won their first-ever European game and tie, progressing past F91 Dudelange on away goals after a 2-2 aggregate draw.

Dudelange – three years later – would go on to mix it with AC Milan, Real Betis and Olympiacos in group stage competition, highlighting, in hindsight, UCD’s achievement as a then First Division club. 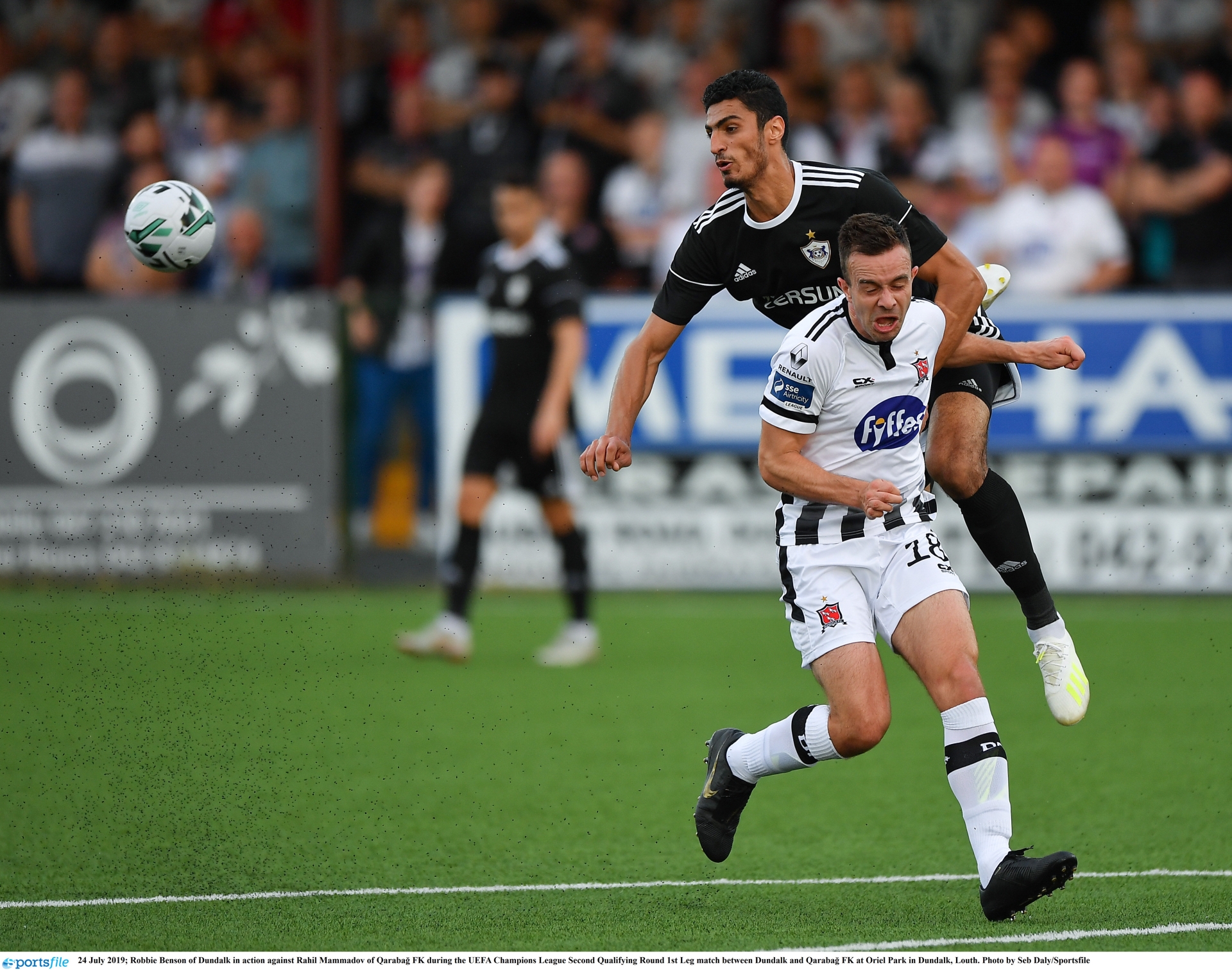 Benson led The College out against Slovan Bratislava in Štadión Pasienky in the following round. The home side were reduced to 10 men in the first half, but just about managed to win 1-0 after a late deflected goal. It was a game Benson felt his side could have shaded.

The return leg at Belfield saw UCD’s exploits, the midfielder says, catch up with them. Slovakian legend Róbert Vittek hit a hat-trick in a 5-1 win for the visitors.

But still, it is a time in his career that will always be special. The now 27-year-old was speaking as Dundalk prepare to do battle with Slovan – the prize on offer is a place in the Europa League play-offs and a shootout for the group stage, not to mention another €300,000.

“We were a young team. It was my first European campaign. We had come off the back of an unbelievable win that we had no right to really win against Dudelange,” Robbie recalls.

“Only three years later, they qualified for the group stages. I think looking back on that win, at the time we looked at it as just a team from Luxembourg that we had beaten, but they have gone on to show that they’re a good side.

“We knew Slovan Bratislava would be a real step up in quality and they showed that. The tie over there in Bratislava, we gave an unbelievable account of ourselves for such a young team with no experience at that level.

“We came away from that game losing 1-0, but we could have won the game. I think the next week the whole campaign kind of caught up with us and they showed their quality in Belfield.

“But it was great with UCD, with lads that I had played with for a few years, to have that experience with a club that meant a lot to me, having been in college – being able to repay them with that, a good win, getting through a round in Europe. To pay them back for all they had done for my education – that meant a lot to me.” 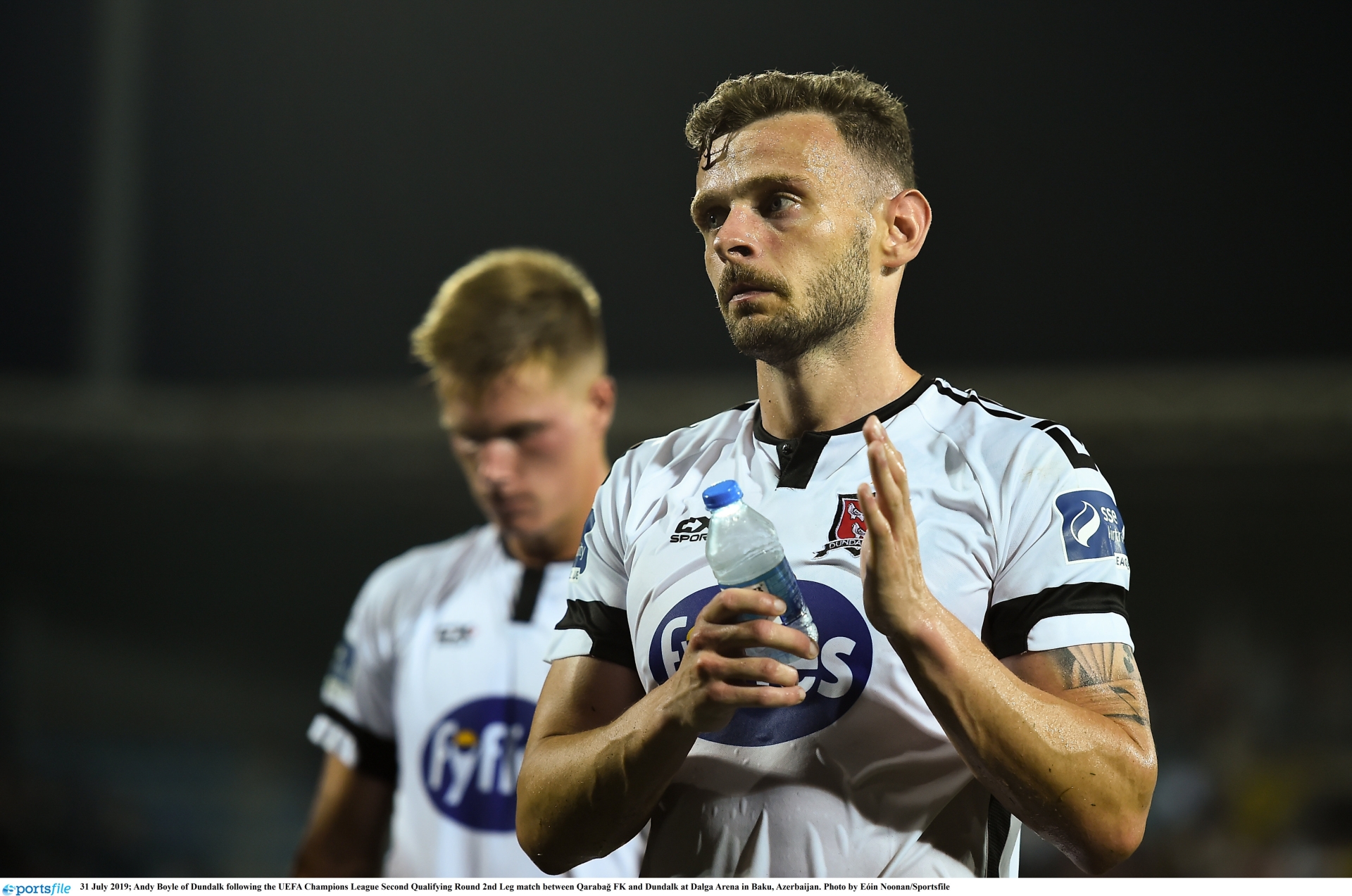 The Slovan Bratislava of 2019 are very different. They have a totally changed squad, a brand-new stadium and earlier this year won their league for the first time since 2014. Benson knows they will be unrecognisable to four years ago.

“There’s not a single player from the team that we played, so it’s kind of hard to gauge what level they’d be at now,” Benson admits.

“I’m sure they have improved; they’ve won their own domestic league now. But if they’re at a similar level to what they were, I don’t think qualifying through this round would be a major surprise for us.

“Obviously, we can’t take them lightly. They’ve won their last round in Kosovo, they’ll be on a high coming into the tie, whereas we’re coming in off the back of a loss, not that we’ll let the Qarabag game affect us – we’ll be confident.”

Benson believes had Dundalk defeated Qarabag in Baku – a decider he missed through a rib injury which he continues to recover from – that it would have gone down as the greatest result for an Irish club in Europe.

Now, the tables are turned, with the League of Ireland champions having the second leg on home soil for the first time this campaign.

Benson – who famously sealed a 3-0 win over BATE Borisov in teeming rain in Tallaght three years ago, to wipe out a 1-0 deficit from the opener in Belarus – is confident it is a “massive advantage”.

“Now we have the second leg at home which is a massive advantage,” he says, speaking about how it can shape a European encounter.

“Had we gone away to Qarabag and won the tie, it probably would have been the best result by an Irish team in European history, really. It just shows the magnitude of the task that we had.

“The first legs in these European games, teams are feeling each other out. You’d rather have that period of time - the first half-an-hour or it could be longer – away from home and then have the full game at home in the second leg.

“Whatever you’re doing – if you’re defending a lead, the other team don’t have the crowd to get behind them to level it – the same thing, if you need a goal to change the game, you can get your own crowd behind you. It does make a big difference.

“The nights we’ve had up in Tallaght the last few years have been great for us. We’ll obviously be looking to win the game out in Bratislava, but hopefully the tie is there for us when we bring it home.”