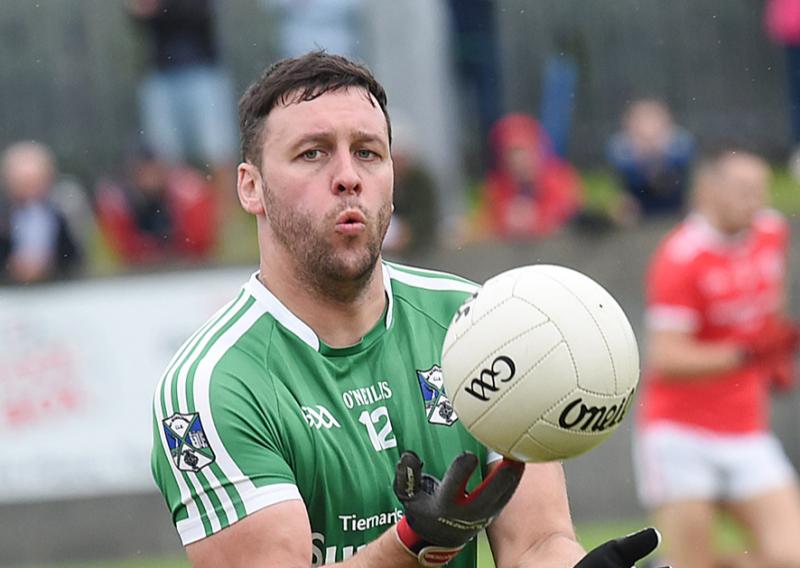 Shane O'Hanlon sparked his team back into life in the second half with seven points. (Pic: Arthur Kinahan)

Shane O’Hanlon almost single handily brought the Geraldines into the Quarter Finals as they made it two wins from two with a victory over St Brides. And it was hard to see this coming, the Blackrock men registering just a single point in the first half.

But O’Hanlon grabbed seven in the second half, having accounted for the Geraldines only score up to that point, while a goal from Ben Garland created a four-point gap their opponents never looked like closing.

The end was marred by three sending offs in a tie that featured plenty of big hits, Paul Clarke for the Gers and Sean Brennan for St Brides seeing red following a melee. Soon after a second yellow came the way of Liam Molloy. Suspensions could hurt both sides come their next game.

Maybe a red card was inevitable, given the opening action had little in the way of excitement other then big hits, a Brides player ending up on the floor as O’Hanlon, Shaun Callan and Mathew Corcoran were all booked by referee Stephen Fitzpatrick early on.

So too was Knockbridge’s Sean Marry and Neil Thornton as the referee continued to penalise any poor tackle. Both sides played very patiently in the opening ten minutes, neither team wanting to give anything away. It was dogged, defensive and downright boring.

Spectators were finally given something to cheer after a gruelling 17 minutes of action, a turnover in the Brides half finishing with an Emmet Kirk point.

When gaining possession, Sean Marry was a rare bright spot in the contest, his ability to take a man on in tight areas and pick out a pass a huge help to the Brides' cause.

He duly doubled their lead, before a rapid fire double from Marry and Sean Brennan had the men in Red up by four on 23 minutes.

Anthony Cunningham’s troops had plenty of the ball, often turning the ball over deep in their own half. The problem was they were unable to get bodies up the pitch fast enough to get into scorable positions.

No surprises who eventually dragged them into the contest, O’Hanlon managing to wriggle his way free from the shackles of three defenders before hitting it over the bar on 28 minutes. At the break they trailed by 0-4 to 0-1.

The second saw both sides open up a bit more, allowing for more chances for scores. Emmet Kirk kept St Brides in front, however the men from Blackrock had found their attacking grove, taking 10 out of 13 chances created from here to the final whistle.

They looked a different team, a mix of great link up play, solo running and accurate passing seeing them eventually take the lead for the first time on 52 minutes. O’Hanlon was the scorer in chief, looking unbeatable from frees and with his teammates now finding him in space, he bagged two more from open play.

A lot of this came from extra their commitment and work rate around the middle, as they began winning anything that was launched into the centre of the park. They created turnovers from three Brides kick outs in a row, one of which resulted in the vital goal on 52 minutes.

Two more insurance scores came prior to the late sending offs, the Geraldines deserved the winners. Next up for St Brides is a clash with Mattock Rangers as they try to claim second in the group.