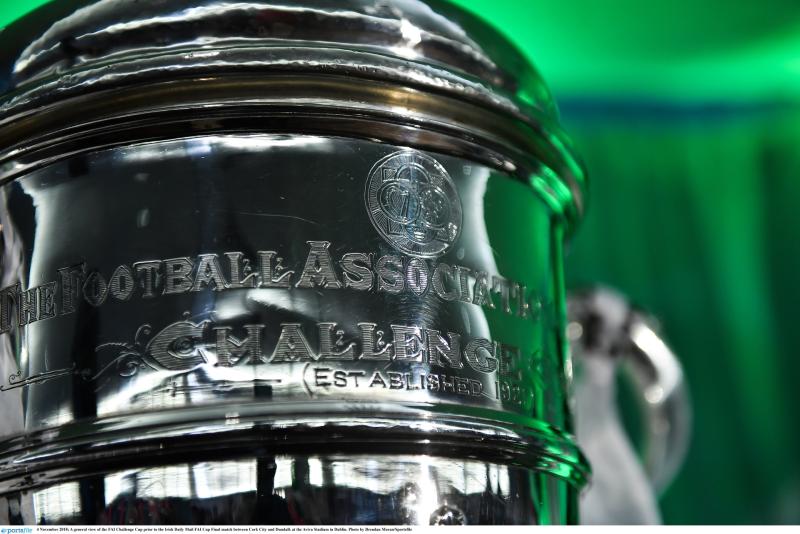 A close up shot of the FAI Cup trophy

Dundalk FC have been handed an away draw as they look to continue their journey towards the Aviva Stadium and another Extra.ie FAI Cup title.

The Lilywhites will head south where they take on First Division outfit Waterford FC in the Quarter-finals, with the tie due to be played on the weekend of the 18th of September.

The Blues have gotten to the last eight following a decisive 6-0 win over non league side Malahide United. Before that they caused one of the early shocks of the competition when knocking out reigning champions St Pats at Richmond Park, 3-2.

In the league it has been a tough year for the men from Munster, who have gone through an ownership change, as well as seeing Ian Morris sacked as manager back in April, having lost to league title rivals Galway United and Cork City in the space of four days.

Caretaker duo David Breen and Gary Hunt had overseen six straight victories to steady the ship before the appointment of former Aldershot manger Danny Searle as their new boss. They currently sit third in the First Division, 12 points behind leaders Cork City.

Stephen O'Donnell's side has already struggled this year when taking on First Division opposition. In the last round they were given a real scare against a dogged Wexford FC.

Having fallen 2-1 down, rising local star Ryan O'Kane grabbed a vital equaliser and forced extra time. Robbie Benson slotted home a penalty with 10 minutes remaining to keep the Lilywhites in the hunt for the trophy.

Elsewhere in the draw, Shamrock Rovers take on Derry City, UCD are on the road to face First Division side Treaty United and Bohemians tussle with locals rivals Shelbourne.

Oriel Park was a hive of activity last Sunday

(Games to be played on the weekend of 18 September)