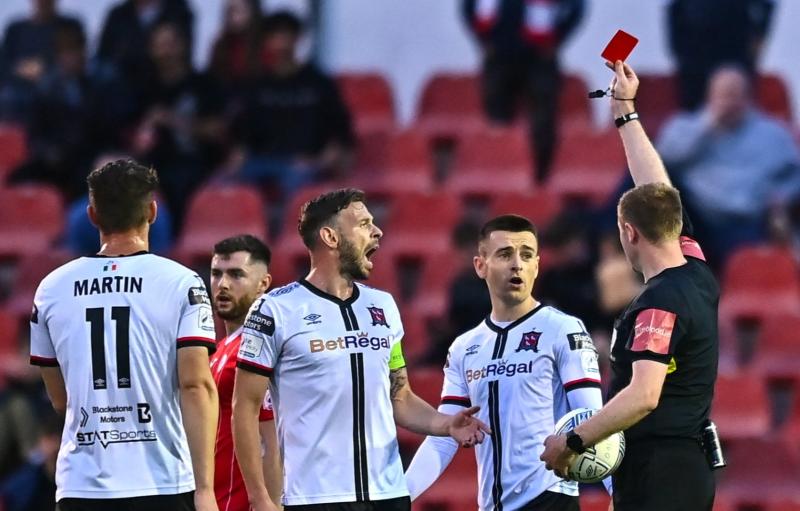 Darragh Leahy of Dundalk, second from right, is shown a red card by referee John McLoughlin during the SSE Airtricity League Premier Division match between Sligo Rovers and Dundalk at The Showgrounds

Ten-man Dundalk FC went down 2-0 to Sligo Rovers in the SSE Airtricity League at The Showgrounds on Monday night – a result which all but ends any faltering title hopes.

The Lilywhites have slipped down to third position in the league standings, and are now just four points ahead of fourth-place St Patrick’s Athletic, who have a game in hand.

John Martin had a good effort kept out by Sligo goalkeeper Luke McNicholas after nine minutes, but Stephen O’Donnell’s side were dealt a huge blow when Darragh Leahy was given a straight red card for a last-man challenge on Frank Liivak after just 22 minutes.

Sligo peppered the Dundalk goal for the remainder of the first half, with Paddy Kirk seeing a shot from distance sail wide, while Lewis Banks curled straight into the arms of Nathan Shepperd, who then saved with his feet from Kirk in first-half stoppage-time.

Shepperd excellently kept out Aidan Keena’s attempt on 57 minutes, but was helpless as skipper Andy Boyle turned Will Fitzgerald’s ball into his own net from the same attack.

The Bit O’Red looked to kill the game off after that, and Max Mata saw his effort trickle just wide, while Fitzgerald hit the side-netting as Sligo continued to mount the pressure.

They made it 2-0 on 83 minutes when Keena’s ball from the right was met by inrushing Estonian international Liivak, who finished into the top of the netting to seal the victory.

It would have been even worse if not for Shepperd, with Keena breaking down the right once more, this time finding Banks, who was somehow denied at point-blank range.