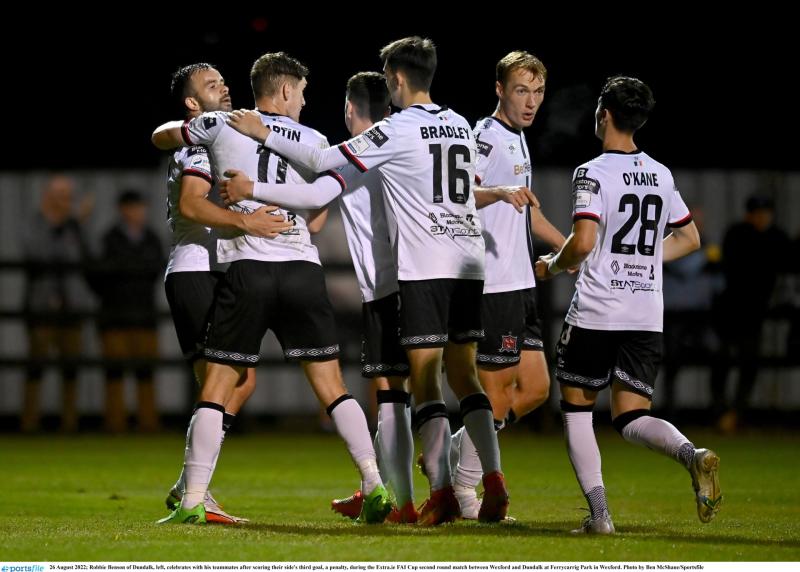 Robbie Benson of Dundalk, left, celebrates with his teammates after scoring their side's third goal, a penalty. (Pic: Sportsfile)

Robbie Benson’s extra-time penalty got Dundalk FC out of jail as they laboured past First Division side Wexford in the second round of the Extra.ie FAI Cup at Ferrycarrig Park.

In normal time, David McMillan gave The Lilywhites a half-time lead they hardly deserved, but goals from Luka Lovic and Ger Shortt had put Wexford in front, and they looked like they were heading for a famous win until Ryan O’Kane kept Dundalk alive.

That piece of individual brilliance from O’Kane proved crucial; for the visitors then went on to win the tie in extra-time through Benson’s decisive spot-kick on 110 minutes.

Dundalk’s produced the game’s first shot at goal, but Runar Hauge’s tame attempt never looked like troubling Wexford goalkeeper Alex Moody, and he gathered at his near post.

Wexford started brightly and almost took the lead when the menacing Conor Crowley dispossessed Robbie McCourt before Shortt forced Nathan Shepperd into a good save.

The First Division side looked up for it, and not long after that, Shortt hooked just over.

However, it was Dundalk that took the lead against the run of play on 38 minutes through McMillan, who finished after Steven Bradley’s shot was parried by Moody.

Wexford didn’t give up the chase, however, and they should have levelled in first-half stoppage-time when Shortt controlled brilliantly, but Shepperd again saved brilliantly.

The hosts kept pushing for what would have been a deserved leveller, and ten minutes into the second half, a Shortt cross was met by Adam Wells and saved by Shepperd.

They got the equaliser their efforts warranted on 56 minutes when a through ball set Lovic through on goal and he confidently slid the ball under Shepperd to make it 1-1.

Ian Ryan’s side almost went ahead when a Crowley cross from the right was met by the head of the excellent Shortt, forcing Shepperd into what was yet another crucial stop.

Ferrycarrig erupted on 66 minutes as Wexford took the lead when Lovic set Shortt on his way, and he beat the advancing Shepperd, and a major shock was now on the cards.

O’Donnell made a triple-substitution and one of those, O’Kane, scored an excellent individual goal, his first for Dundalk, to level matters once again on 73 minutes.

The Lilywhites, seemingly out of jail, almost won it late on when a Benson set-piece delivery, via the head of McCourt, was somehow kept out at point-blank range by Moody.

Extra-time provided little in the way of chances at either end, and the game looked to be heading for penalties until Wexford captain Joe Manley tripped John Martin in the box.

With just ten minutes of extra-time remaining, up stepped the experienced Benson to convert and send Dundalk into the quarter-final stage for the twelfth consecutive year.