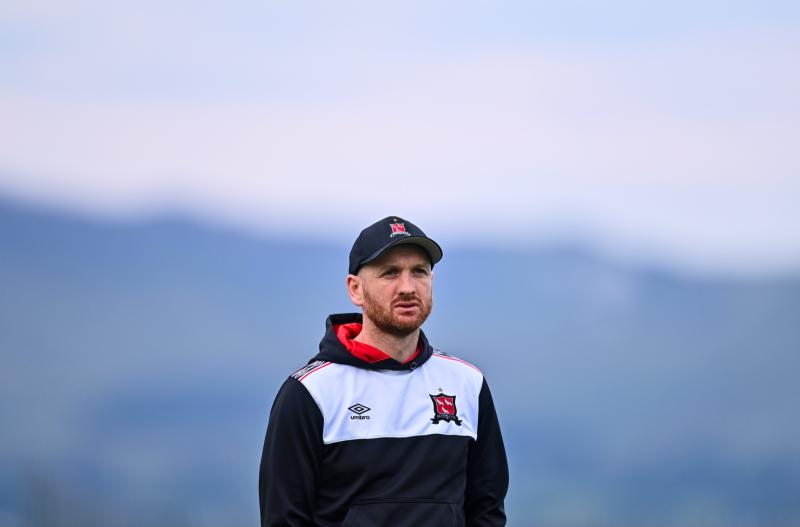 Dundalk manager Stephen O’Donnell said he could not ask any more from his players from an effort point of view after he saw his side go down to their second league defeat in a row against Sligo Rovers at the Showgrounds on Monday night.

Stephen told me the only thing he was disappointed in was the result. He said the shape of the game was turned on its head after Darragh Leahy was sent off on 23 minutes.

Leahy got a straight red when he appeared to slip on the pitch and handle the ball on the ground, as he was the last man back. To me, it was the right decision. Stephen said to him he thought his side got some of the initiative back in the second half when he felt Dundalk were the better team.

But he accepted that once you go down to 10 men, it limits a team in regards to an attacking threat. The Dundalk boss said that from an effort and a togetherness standpoint, he was delighted with his team.

Stephen said he did not see what happened in the sending off incident. But he says initially referee John McLaughlin was not giving a red card as he was shaking his head. He said the referee did not blow the whistle. So the Dundalk boss says obviously it was the fourth official who told him it was a red card. He says sometimes fourth officials claim they are not refereeing the game and they can’t do anything about it. But he says at other times they make the big decisions.

Stephen said he did not think Dundalk were under the cosh for Sligo’s first goal twelve minutes in to the second half. The goal came when Sligo’s Aidan Keena had a shot parried away by Dundalk keeper Nathan Shepherd. Will Fitzgerald got on to the rebound.

His effort was turned in to his own goal by Dundalk captain Andy Boyle.

Stephen O’Donnell said they defended the Keena effort well. But a mixup in the defence saw Sligo getting their goal on the second effort which he described as soft.

The second goal happened on 83 minutes, Dundalk had committed more bodies forward as they went for the equaliser. Aiden Keena got a cross in from the left, Frank Livak drove the ball to the roof of the net.

Stephen says there is no reason to be despondent following the defeat. This was because of the effort his side had put in to the game. He said it was not easy going down to 10 men. But he claimed everybody dug in and emptied the tank. This was after playing 120 minutes in the cup on Friday.

O’Donnell told his players after the game they should not be despondent after the effort they had put in. He says he thought Dundalk lost the game in the right way with everyone grafting for each other when they were down to 10 men.

He said all games going forward were big. With Derry winning on Monday they now overtake Dundalk in second place and have a game in hand on Dundalk. Pats in fourth place also won and are now breathing down the necks of Dundalk in the chase for the European spots. But O’Donnell says Harps and Pat’s have big games too. That, he says, will even things up.

Stephen said that Pat Hoban was missed as he is a high calibre player and is one of the best strikers in the league. He says he is still recovering from a calf injury and he would see where he is at over the next period of time .

O’Donnell denied reports Hoban could be out for the next 8 to 10 weeks. He says Pat is making a good recovery. But he says for calf muscle injuries, there is no magic wand.