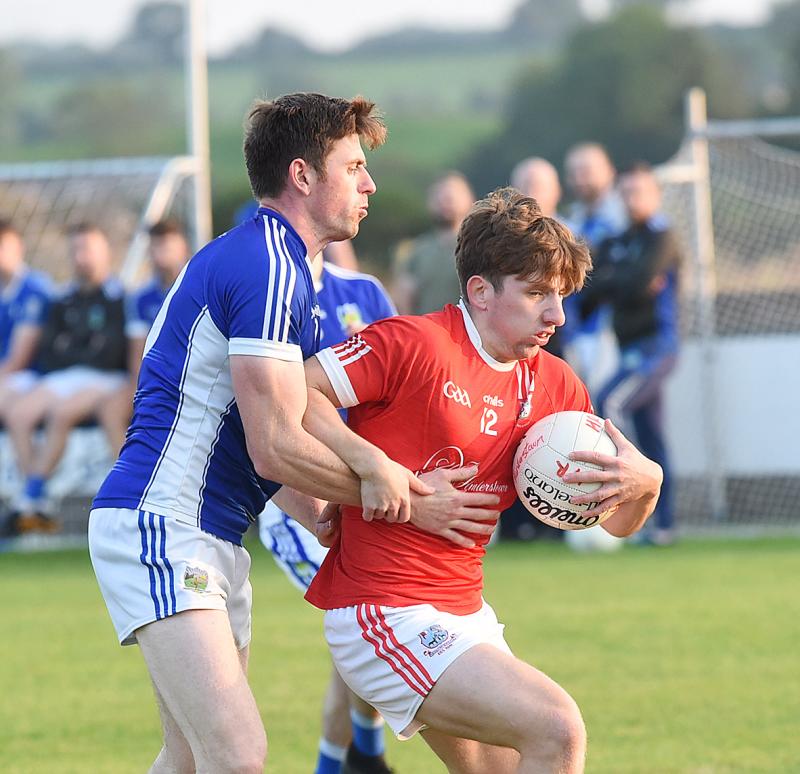 Glen Matthews, right, hit 1-4 as he came of age for Hunterstown in their win over Kilkerley Emmets in Ardee. (Pic: Arthur Kinahan)

Brendan Lennon did not get the memo. The Hunterstown substitute hit his side’s last point in their twelve -point win over Kilkerley Emmets in Ardee on Saturday evening.

Rover’s win was simply down to the good form of Glen Matthews and Ryan and Dean Burns. Up until Lennon’s late point, the trio had accounted for all of the winners’ total. That is how accurate and effective they were on the night.

Kilkerley could not handle the forwards slick movement and it made for a long evening for the Emmets, who looked very much like a side that came into the encounter on the back of some poor league form.

Injuries and absences have been the story of their season and last year's semi-finalists look way off the pace this year as a result. Conor Quigley especially, will be needed in a fortnight's time to stave off the Irelanders and perhaps maybe a relegation scrap.

Glen Matthews has always threatened but Saturday was when it all came together for the electric forty yards man. Right from the start he fired over the first two points of the game. Two sweet efforts from distance.

Then all of a sudden it was 1-7 to no score. Rovers just opened up and expressed themselves and the respect they paid Emmets at the start dissipated as Mathews coolly slotted the ball past Rian Hand.

The quick hands from debutant James Rogers was key to opening up the defence and sending Matthews away. Rogers was a Louth minor last season and one of three starting debutants on the night for Colm Donnelly’s side, Shane Halpenny and Cillian Taaffe in defence the others.

Ryan Burns then got going, the county man had a great tussle with Aaron Crawford all evening and four points were amassed by half time.

Fionn Cumiskey has been a bright light this season for Dessie Lennon and another of last year's Louth minors opened their tally in the 26th minute of action and quickly added another from play to make it 1-7 to 0-2 at the interval.

There was not a lot of hope for a turnaround in the chatter around Ardee at half time and Dean Burns made certain with two quick points in a lively second half showing.

Substitutes Sean Hand and Kieran Murtagh tried hard off the bench but Emmets were too off-colour on the night and Hunterstown and the two Burns were linking up like they were in their back garden.

Tadhg McEneaney landed three free’s down the stretch before Lennon crashed the party with a well taken score for the rampant Rovers.