Division 2A and 2B Roundup: O'Connell's and Clan na Gael secure their safety 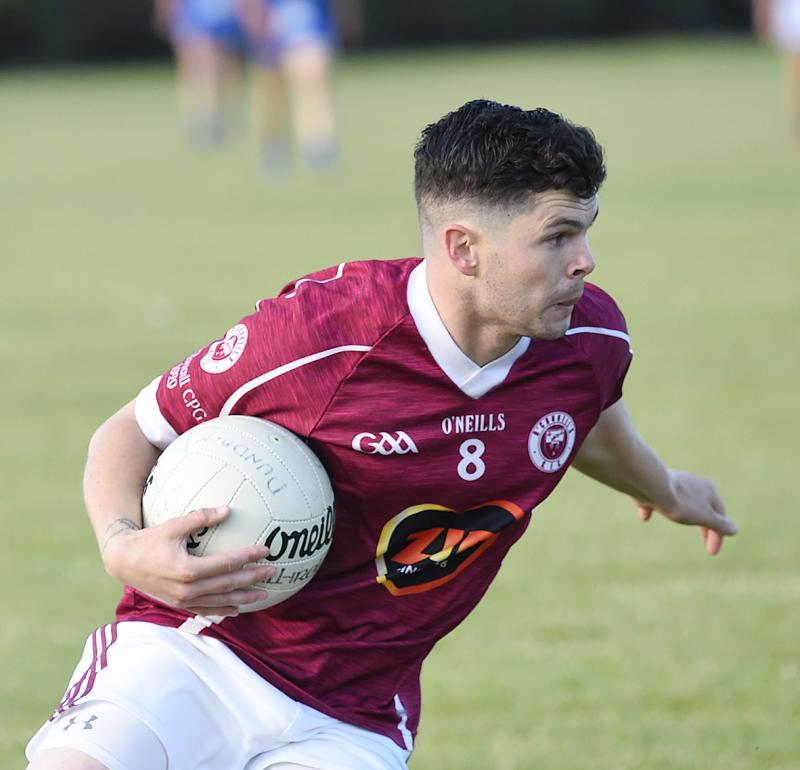 Stuart Osborne on the attack for the O'Connell's. (Pic: Arthur Kinahan)

St Kevins are in pole position in Division 2 after picking up another crucial win at home to Young Irelands on Tuesday night.

For much of the first half, the game went according to the form book as the Kevins moved into a comfortable lead with scores from Cameron Maher, Shane Meade and Lee Crosbie. However, Dean Maguire had the final say of the half as the only goal of the game reduced the gap to 0-9 to 1-4 at half time.

However, the Dundalk men were unable to build on that score despite second half points from Jordan O’Donoghue and Cian O Naraigh. At the other end Crosbie finished with seven points while Evan Maher and Tom Matthews also pointed to secure the win.

Hunterstown Rovers maintained their hopes of promotion from Division 2 after scoring a four-point win over fellow challengers Dundalk Gaels at The Ramparts.

Ryan Burns was the tormentor-in-chief for the visitors as he finished with 2-7 to his name after another vintage display. His first goal came in the opening period but it wasn’t enough to give his side the lead at the break as Jason Clarke’s three-pointer had the hosts 1-5 to 1-4 in front.

However, Burns inspired his side to hit back as he added a second goal to consign the long term leaders to a third successive defeat despite a Sean McCann goal.

O'Raghallaighs continued their fine run of form as they continued to push for the Division 2 league title thanks to a nine-point win away to Roche Emmets.

Kyle McElroy grabbed the headlines as he finished top scorer on the night with 1-7 to his name. The goal came in the opening half along with another strike from Barry Flanagan that gave the Drogheda men a 2-4 to 0-5 lead at the break.

Flanagan and Ben Rogan added goals in the second half to keep the O Raghallaighs very much in charge. A late Mark Byrne goal and points from Shane Byrne and Glen Stewart weren’t enough for Roche to take anything from the game.

Clan na Gael came home from Ballygassan on Tuesday night with a victory that ensures they will retain their Division 2 status for another season, while leaving Naomh Fionnbarra rooted to the bottom of the table.

Goals from Craig Long and Billy Smith proved the difference between the teams as the Dundalk side had too much for the hosts on the night.

Ciaran Markey led the challenge for the Barrs, while Adam Hanratty and Matthew O’Reilly were also among the scores but they couldn’t prevent their side slipping to another defeat.

St Joseph’s came good at home on Tuesday evening to pile further pressure on Oliver Plunketts at the foot of Division 2.

The damage was done in the first half as the hosts built up a 13-point advantage. Conor Neary and Daire Smyth found the back of the net as the Cluskey Park men went in with a healthy 2-10 to 0-3 advantage.

The Drogheda men responded well in the second half as points from Conor Early helped them become more competitive. However, they left themselves too much to do and points from Craig Doherty helped them complete a comfortable win.

O’Connells secured their division 2 status with a six point victory over Kilkerley at the Grove on Tuesday night.

In a competitive first half, Kilkerley had points from Tadgh McEneaney, Fionn Cumiskey and Ewan McEnteggart, but O’Connells responded through Niall Conlon, Robert Quigley and Cian Doyle to give their side a 0-9 to 0-7 lead at the break.

Dean Stanfield found the net early in the second half to put his side in charge and they sealed an important win when Quigley pounced for a second late on.