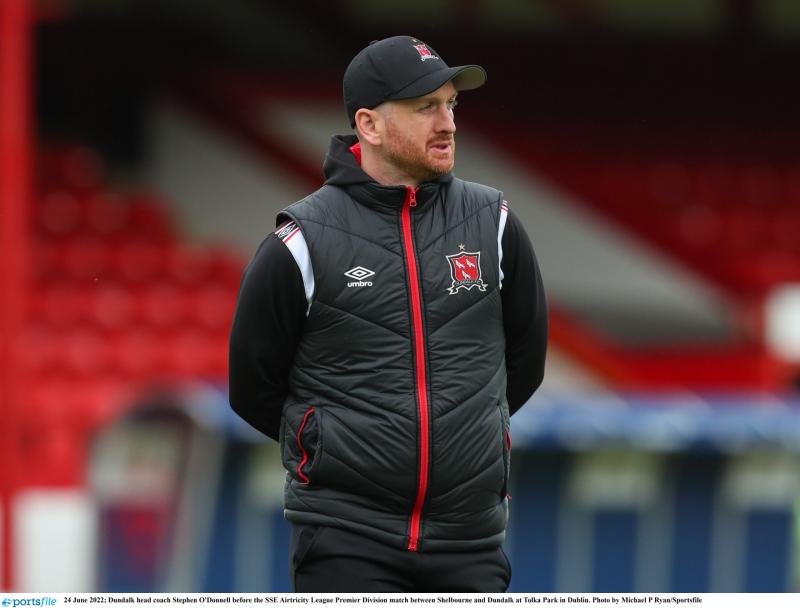 Dundalk head coach Stephen O'Donnell before the match between Shelbourne and Dundalk at Tolka Park. (Photo by Michael P Ryan/Sportsfile)

After going unbeaten in their last nine matches, Dundalk welcome bottom-of-the-table UCD to Oriel this Friday night (kick-off, 7.45pm), but manager Stephen O’Donnell is taking nothing for granted against a team who battled back to claim a 2-2 draw with The Lilywhites at the Belfield Bowl back in May.

“UCD lost 2-1 to St Pats away last week" exclaimed the Galwegian. "They only lost 1-0 to Derry. They’ve been very, very competitive in all their games.

“We’ll treat them with massive respect. Andy (Myler) is doing a great job there. Obviously, it’s not easy losing Colm Whelan for the season, but they’ve reacted very well to that.

“They’ve been in all the games they’ve played, so Friday will be no different. We need to be at it and at our best to get any results in the league.”

Patrick Hoban sat out the 0-0 draw with Shels, and O’Donnell remained tight-lipped when quizzed about the forward’s availability for the upcoming game against UCD.

“He just has a bang,” asserted the Dundalk boss. “He’s out tonight and we’ll see how he is next week.”

O’Donnell was speaking shortly after the sides 0-0 draw away to Shelbourne. Despite keeping their current unbeaten run intact, the former club captain felt they could have gotten more from the tie in Tolka Park.

“We had the chances to win the game,” he lamented. “That’s why we’re disappointed. I don’t think they created anything clear-cut really. We had a few gilt-edged chances that on another night we take, but that’s the way it is.”

Crucial to that draw has been the duo of Lewis Macari and Mark Connolly, who have helped the Lilywhites on their way to nine clean sheets in 20 games this season. Both players initial loan spells ended today.

Stoke City initially planned to include Macari in their preparations for the upcoming English Championship season once his six-month loan concluded, but news broke this afternoon that The Potters and Dundalk had agreed to an extension to keep the 20 year old at Oriel Park until the end of the season.

Meanwhile Connolly is due to return to his parent club, Dundee United, where he has a year remaining on his contract,. But the Scottish Premiership side are looking to offload the 30-year-old Clones native, who has also attracted interest from clubs in the Irish League.

“Obviously we’re not the only party involved" explained the head coach. "There’s other parties involved, so we’ll see where we are. We’d be hopeful on both of them going forward.  (They’ve been) very good. We have a good defensive record. That’s throughout the whole team and they’ve been outstanding.

"Mark has been brilliant. Him and Andy (Boyle) have formed a really good partnership and we’ve seen that again there tonight.

“(Keeping them) would be our ideal situation, but as I said, we’re not the only parties involved, so everyone needs to be in agreement and hopefully we will be.”

Friday’s game between Dundalk and UCD is to be refereed by Robert Harvey (Dublin) and can be watched live via the LOITV online streaming platform for a price of €7.