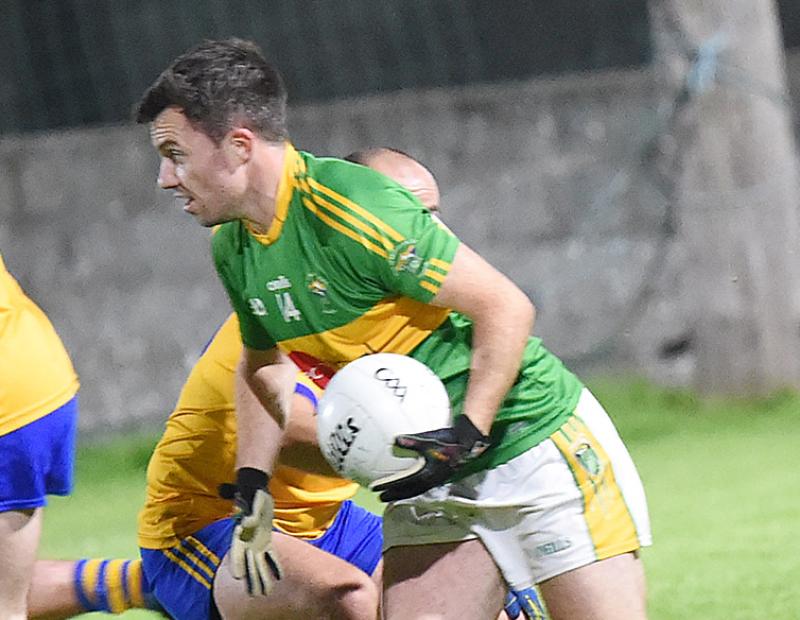 Hollywood Developments Division One Round 10

Newtown Blues suffered their first defeat of the Division 1 campaign when they fell to a shock defeat at the hands of Sean O’Mahonys at Newfoundwell.

The Dundalk men were good value for the win on the night with a fine team performance that saw Stephen Kilcoyne contribute seven points, while Junior Shotayo scored a second half goal to seal the win.

The victory kept alive the O’Mahonys hopes of making the top six, for the time being at least. The Dundalk men started on the front foot and with Kilcoyne making his mark, they went in at the break with a 0-8 to 0-4 advantage.

The Blues were unable to find their rhythm in the second half but goals from Colm Judge and Ian Connor saw them stay in touch. However, Kilcoyne continued to find his range to keep the Seans in charge before Shotayo’s goal put the game beyond doubt.

St Patricks moved into contention for the top six in Division 1 thanks to victory over neighbours Cooley Kickhams at Lordship on Saturday night. Goals from Danny O’Connor, Leonard Gray and Joseph Connor capped a fine display from the hosts as they came out winners by 12 points.

The Pats were first on the board through Aidan McCann, but Cooley looked to be in the groove when they replied with three quick-fire scores to take a grip on the game.

However, the Pats responded impressively and saw Cathal Grogan (2) and Jack Murphy find their range before Danny O’Connor scored the first goal of the game on 12 minutes.

Goalkeeper, Martin McEneaney chipped in with two points, while Joseph Connor was also on target to help the home side lead by 1-9 to 0-4 at the break.

Cooley had a good spell in the third quarter, but the Pats lead was never in any real danger and they wrapped up a vital win with late goals from Gray and Connor.

Naomh Mairtin moved into the top six in Division 1 thanks to this hard-fought victory over St Mochtas at Monasterboice on Saturday night. Tom Gray and Wayne Campbell were in fine scoring form as the hosts chalked up their fourth win of the campaign.

It was a disappointing outcome for a Mochtas side who went into the tie hoping to join Newtown Blues at the top of the table following the Drogheda side’s first loss of the season on Thursday night. However, despite their best efforts, the Louth Village men fell just short and as a result were joined by St Marys in second place.

There wasn’t much to choose between the teams in the first half as both sides enjoyed a good share of possession. With Gray and Campbell leading the way for their side, the Jocks led by 0-7 to 0-6 at half time as the Mochtas kept in touch with help from Cormac Smyth and Ciaran McMahon scores.

The pattern of play didn’t alter greatly in the second half but once again it was the Monasterboice side who had the slight edge in terms of scoring.

Jack Murphy, John Clutterbuck and JP Rooney were also on target for the winners to hold off the challenge of the Mochtas who also had Jamie Farrell, Craig Lennon and Gerry Garland among the scorers.

St Marys moved into joint second place in the table thanks to this comfortable win over the Geraldines at Haggardstown on Friday evening. The Ardee men based their victory on a strong showing against the elements in the first half before kicking on after the restart to claim their sixth win of the campaign.

Boosted by the return of their county players, the Marys were just too strong for the hosts as Daire McConnon, Liam Jackson and Ciaran Keenan all made an impact on the scoreboard.

The Gers had the wind in their backs in the first half and a goal from James Craven along with points from Shane Rogers and Jim McEneaney saw their efforts rewarded.

However, at the other end the Marys were clinical in front of the posts as McConnon, Jackson and Conor Gillespie all found the net to send the teams in level at the break at 1-9 to 3-3.

The visitors continued to impress in the second half and with the wind in their backs, the result was never in doubt. Ciaran Keenan and Jonathan Commins were among the points scorers as both finished with four to their credit.

This local derby in Páirc Naomh Feichín on Saturday evening was always going to be an interesting affair and it didn’t disappoint.

Playing with the wind the visitors to Beaulieu came out of the blocks and were the more impressive team in the first quarter clocking up four points before Fechins Harry Haughney got the home side’s first point of the match.

The Dreadnots continued to dominate the scoreboard adding three more points to put them six ahead as the Fechins struggled to find their rhythm. However, before the break, Niall Devlin struck the 1-1 to give his side hope as the deficit was cut to 0-10 to 1-3.

Armed with the wind in this second half it was the Fechins that started the scoring with points from Brian Devlin, Harry Haughney and Niall Devlin. Niall Devlin added two more to his tally, to put the Fechins ahead for the first time in the match.

Harry Haughney got their eighth point of the game before Brian Devlin fired in a second goal to put his side in command. The Dreadnots got two late consolation points in the final two minutes but it was too late to deny the hosts a deserved win.

A fortunate goal at the start of the game sent Mattock Rangers on their way to a big victory over a depleted St Brides side at Collon on Saturday night. The two points mean Rangers will play in the top six for phase two.

Wingback Ronán Kilbane caught a low shot from Aaron O’Brien and lashed it home from close range for the match's opening score. Brides had chances from Kevin Hearty, but early sub Shane Hickey impressed for the home side to see them lead by 1-11 to 0-3 at the break.

The second half was a non-affair thanks to a Liam Flynn major while Stephen Smith’s series of saves frustrated Declan McCoy’s side on an off colour night for the Knockbridge men, who are also all but secure of their top six place.