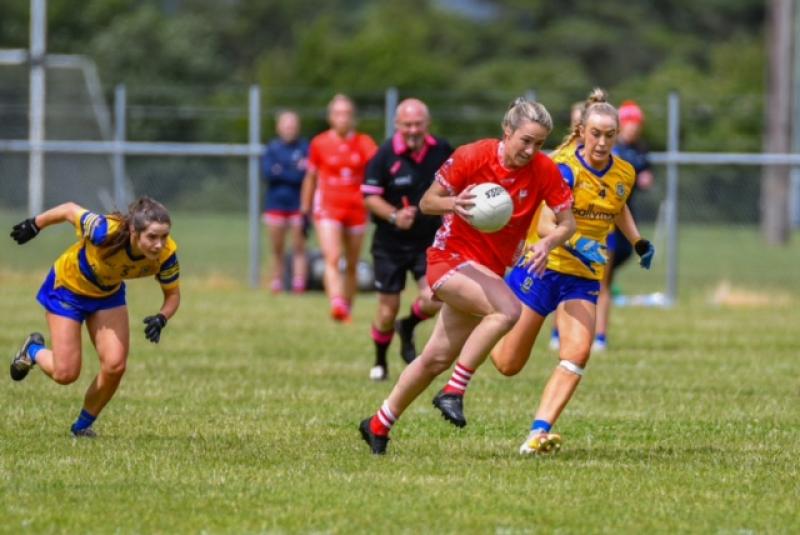 For a third year running, the second time in a row at this venue, the Louth Ladies exited the Intermediate Championship at the Quarter final stage as a more clinical edge from Roscommon proved decisive.

The Wee County didn’t look outclassed by the Girls from the West, far from it, but were sadly their own worse enemies on an afternoon where they only converted six of their 22 scoring opportunities.

In a tie where neither side looked comfortable up top for significant periods of the match, a flurry of 1-2 without reply in the five minutes leading into half time was the difference.  It created a deficit Louth was never able to peg bag, despite working extremely hard to do so.

After big victories against Down and Clare, the defeat will come as a big blow, yet with many new names blooded into the team in 2022, the future of Ladies Football looks bright, with their next step forward hopefully coming in the not-too-distant future.

It was the Rossies that got the scoring proceedings underway, captain Laura Fleming notching the first of her six scores after just two minutes. From a turnover, the St Ciaran’s clubwoman would duly brush aside the challenge of two defenders before neatly splitting the posts.

That turned out to be rare score in what became a very low scoring opening quarter of this contest, the Girls in Primrose and Blue kept to just one more shot at the posts in the next 20 minutes, a poor wide from close range from Fiona Tully.

Wayne Freeman’s troops defended very well, forcing mistakes and getting crucial blocks in that resulted in Roscommon rarely getting any decent ball into their forwards. The Red Wall looking pretty much impenetrable at this stage.

Louth were dominating the possession stakes, their main weapon being an ability to quickly turn defence into attack. The likes of Sarah Quinn, Shannen McLaughlin, Rebecca Carr and Ciara Woods were cutting the Roscommon rear-guard open time and time again with lung bursting solo runs.

The problem was they were struggling to turn this pressure into scores and would let six opportunities go wasted before finally making a breakthrough on the scoreboard.

The usually lethal Laura Collins dropped two into the keeper’s hands, Carr doing the same in their first attack which led to Fleming opening the scoring. There were also wides recorded by Aoife Halligan, Kate Flood and Ciara Woods.

While their running game was strong and their ability to keep the ball was good, the final ball and the options available after solo runs from defence was poor and led to the Girls in Red giving the ball away cheaply. Coupled with their shooting woes Louth were in trouble.

The saving grace was that Roscommon offered little more then them, however they did double their lead on 22 minutes as some good link up play form Caroline Conway and Caroline McHugh teed up Jenny Higgins, as the crowd were treated to just the second score of the game on 22 minutes.

Louth finally got on the board a minute later, Carr drawing a foul out of Aisling McCauliffe which was nicely tapped over by Collins. Carr won the resulting kick out and pointed to leave the sides level once again.

This was when the Wee County really needed to turn the screw, but sadly it was Oliver Lennon’s side that made the breakthrough, his team hitting 1-2 without reply in the next four minutes.

Fiona Tully worked hard to grab two points to regain the lead, but it was the goal from Aisling Hanley on 29 minutes that did the real damage. A poor short kick out from Holly Lambe Fagan was intercepted by McCauliffe who duly teed it up for Hanley to palm into the net from close range.

Louth grabbed the final score of the half from a Collins free, but after such long periods of dominance must have wondered how at the break they somehow trailed by 1-4 to 0-3.

They needed to come out of the blocks strong and to their credit managed to bag the opening point of the half via the hard-working Laura Collins. But unfortunately, their luck in front of the posts didn’t improve as they notched two more wides in between this effort.

Freeman’s side went 13 minutes without a score, a time period where again they missed three opportunities, two dropped short by Jenny McCourt and Sarah Moore and another going wide.

Just like in the first half, Roscommon weren’t up to much, the key being anytime they did venture forward they were scoring, particularly because they were now drawing a lot more fouls, all of which were within scoring range.

Player of the Match Laura Fleming was leading by example and while Collins’ frees were wayward, she was making no mistakes as the Connacht side’s key sharpshooter. She grabbed five of her team’s six second half points as she led by example when her county needed her most.

Her only miss was a chance to kill the game 47 minutes when getting free close to goal only for Fagan to make a lovely point blank save. It did eventually fall into the hands of Roise Lennon who taped it over the bar.

Despite always being behind, Louth never relented in their work rate and continued fighting until the final whistle. With a little help from the subs Jenny McCourt, Sarah Moore, Aine Breen, Seona Halligan and Kate Matthews the Wee County found a second wind.

They threw the kitchen sink at Roscommon, taking over at midfield and forcing the Westerners to soak up wave after wave of pressure as they went in search of a goal. The closest they came was on 59 minutes, a Collins effort agonisingly coming off the crossbar.

That would have left three between the sides going into added time, but without that goal the gap proved too big to fill, Roscommon’s much better efficiency, 11 from 15, seeing them run out worthy seven-point winners.