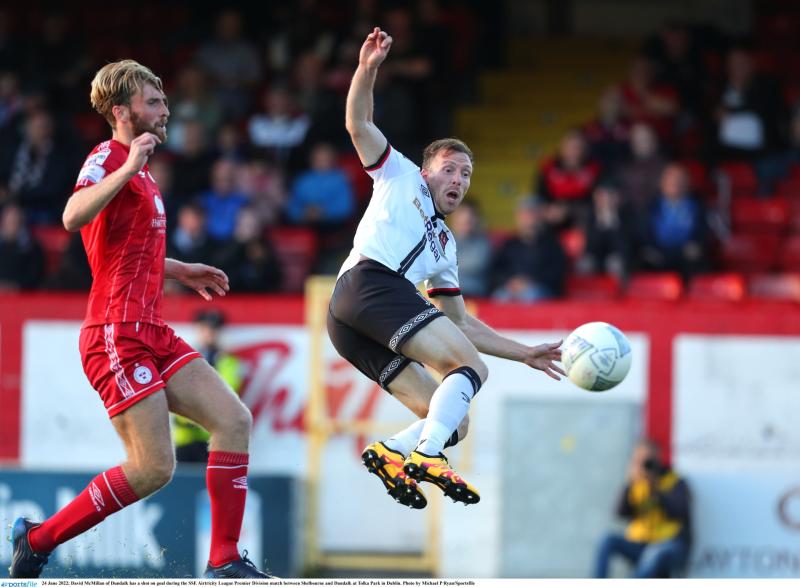 David McMillan of Dundalk has a shot on goal during the SSE Airtricity League Premier Division match between Shelbourne and Dundalk at Tolka Park. (Pic: Michael P Ryan/Sportsfile)

It was frustration at Tolka Park on Friday night for title hopefuls Dundalk FC after they were held to a scoreless draw by Damien Duff’s Shelbourne in the SSE Airtricity League.

Dundalk made a single change from their recent win over Shamrock Rovers as David McMillan replaced Patrick Hoban, who didn’t make the matchday squad due to injury.

Shels had the first effort of what was a largely drab affair when Shane Farrell saw a free-kick from just outside the box sail over the top of Nathan Shepperd’s crossbar.

Dundalk threatened when Steven Bradley had an attempt from the left-hand side deflected wide after Lewis Macari had picked him out with a wonderful floated pass.

Playing what could be his final game as a Lilywhite, Stoke City loanee Macari soon afterwards fired well over the top from distance after Paul Doyle had laid it off for him.

Bradley curled well off target, summing up a frustrating half for Stephen O’Donnell’s side, who were dominating possession, but struggling to break down the Shels rearguard.

That was until the 33rd minute when Robbie Benson, played through on goal by Daniel Kelly, somehow hit the side-netting in what was by far the best chance of the night.

Not long after the second half started, Macari whipped a beautiful cross into the box which was met by McMillan, however the Dundalk frontman just couldn’t turn home.

On 72 minutes, Benson threw himself at an excellent Darragh Leahy cross, but diverted off target from close range as time started to run out for the frustrated visiting side.

Shortly after Aodh Dervin forced Shepperd into a save at the other end, a Bradley ball was turned over by Dundalk sub John Martin as the game entered its final 10 minutes.

Culminating with Ryan O’Kane’s volley off target deep in stoppage-time, Dundalk applied some late pressure, but couldn’t fashion a winner, losing ground on league leaders Shamrock Rovers after they defeated Bohemians 1-0 at home on the same night.