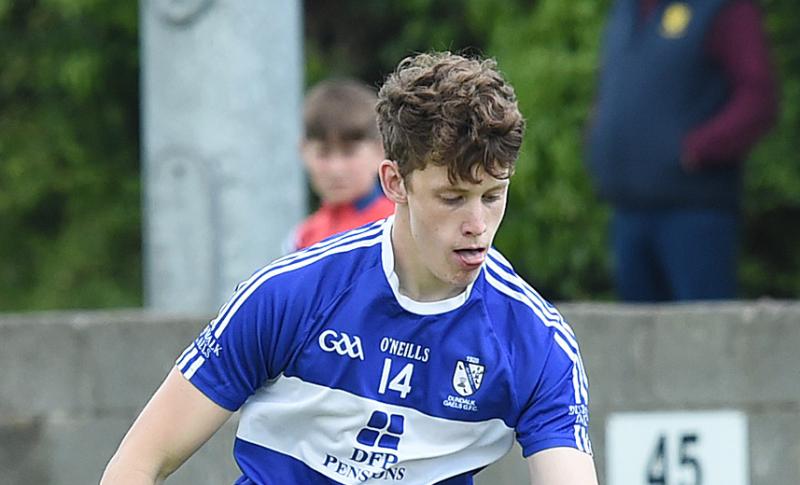 Roche Emmets moved back into the top six thanks to a comfortable win over Oliver Plunketts in Mell on Saturday night.

The visitors always appeared to have the edge in this encounter and goal seconds either side of the interval sealed the Plunketts fate, to leave the Drogheda men two points adrift at the foot of the table.

Despite losing their last game, the Faughart men began in a confident mood and had the first point on the board through Mark Byrne inside the first minute. Kevin Callaghan, Barry O’Hare and Gerard Browne were also among the points in that half as their side took control.

The Plunketts gave themselves hope with a goal from Kristian Nolan but just before the break James McDonnell found the net for Roche to make it 1-10 to 1-3. Forty seconds into the second half the lead was out to ten points as Mark Byrne struck a fatal blow to the Plunketts hopes of a comeback.

Roche could afford to lose Shane Byrne to a red card and also conceded two goals to Luke Haggans and still come out on top, with Barry O’Hare adding a third goal on 41 minutes.

Dundalk Young Irelands recovered from a slow start before coming out comfortable winners against their local rivals, Young Irelands, on Saturday night at The Ramparts.

A dominant 20-minute spell just before the break along with a second half Thomas Kavanagh goal helped the hosts to victory. There was also another eye-catching scoring display from Dylan McKeown with the full-forward finishing with a tally of nine points.

The home side needed two points from McKeown inside the opening ten minutes to keep in touch as the visitors made a bright start with Ruairi Kelly (2) and Jordan O’Donoghue giving them a slight advantage.

However, the Gaels began to assert themselves and with McKeown adding five points, along with efforts from Mark Hanna and David McComish, they took a healthy 0-9 to 0-3 lead into the second half.

Young Irelands never looked capable of mounting a comeback in a low-scoring second half and it was eight minutes into the second period before McKeown stretched the lead.

Just before the end of the third quarter, substitute Thomas Kavanagh scored the only goal of the game to secure the win. In a disappointing second half display, the Young Irelands only point came from Dermot Mone.

Kilkerley Emmets moved clear of danger at the foot of the table thanks to a comprehensive win over Naomh Fionnbarra at John Markey Park on Friday evening.

The Finbarrs went into the game boosted by victory over neighbours O’Connells midweek, but were unable to replicate that display against a Kilkerley side who made it three wins on the bounce.

That run of form has moved the Emmets into seventh place in the table, just a point behind Roche ahead of the final round of games. Meanwhile, the Finbarrs remain in the relegation play-off position ahead of their trip to Cluskey Park on Saturday.

From the outset it was clear that the visitors had the upper hand and they made that count with first half scores from Fionn Cumiskey (3), Tadhg McEnaney (2), Cathal Bellew (2), Darren Geoghegan and Ewan McEnteggart.

At the other end, their defending was equally impressive as they kept the Finbarrs scoreless to lead by 0-9 to no score at half time. Just after the restart Aidan Corrigan pounced for the only goal of the game to underline Kilkerley’s dominance.

Thomas McCreesh and Padraig Butterly did get the Finbarrs off the mark in the second half but the Emmets cruised home with scores from Cumiskey, Fintan Brady and Ultan McEneaney.

The visitors opened proceedings by finding the net thanks to an own goal, before adding a point to take control of the game, only for the Kevin’s to level courtesy of a goal from Adam Cromwell and points from TJ Doheny and Lee Crosbie.

Although the hosts were facing into the wind, they continued to push forward and added a second goal from Cameron Maher along with another Doheny point.

The Clans also enjoyed good possession going forward and with Gavin Gaffey, Mark McGeown and Robbie Curran on target, they went in at the break level at 2-3 to 1-6.

With the wind in their favour the Philipstown men took little time in taking advantage, half back Karl Martin opened up their purple patch with a point, quickly followed by a goal from TJ Doheny, a point from Adam Cromwell and a free from Lee Crosbie.

The Clans could only match four second half points in reply as the hosts cruised to victory with scores from Karl Martin, Tom Matthews, Lee Crosbie and Doheny.

O’Raghallaighs maintained their push for promotion at the Gaelic Grounds with a 2-18 to 1-12 win over St Joseph’s.

In a very open first half it was the hosts who had the better of the scoring, leading by 2-9 to 1-7 at the break. The O’Raghallaighs opened the scoring when Eoin Moore cut through to score, the Joes responding with an excellent long-range point from Gabriel Bell.

The first green flag of the game came on 11 minutes when a quickly taken free over the Joes defence was collected by full back Emmet King to race through and hit a low shot to the Joes net. A Ruairi Moore free extended the O’Raghallaighs lead.

The Joes hit back when Bell was taken down and Alan McKenna made no mistake from the penalty spot to leave the O’Raghallaighs leading by 1-5 to 1-4 at the end of the first quarter.

Ben Rogan made his way in from the right and his hand pass was palmed to the Joes net by John Horan to give the hoops the lead at the break. The resumption was an even affair but Kyle McElroy was in flow and finished with seven.

Hunterstown Rovers moved into fourth place in the Division Two league table when they had a very convincing victory over the O’Connells at the Grove on Saturday night.

The home side started well, landing the first three points from Cian Doyle and a brace for Robert Quigley who would end the night with 11 points to his name. The lead would be swift and didn’t last long as a long ball found Ryan Burns and he scored the first goal of the game.

Things did not get any better for the Bellingham side a minute later when Caolan McCabe got the second goal of the game after a pass from Paul Carrie.

Andrew Keenan got a point for the home side but Rovers scored the next 2-3 without reply with the goals coming from Burns again and Daithi Carroll. James Rogers got in on the rout to make it 5-10 to 0-6 at the break.

With the second half a formality Quigley added to his tally while Rogers found the net again along with Rovers’ debutant Shane Halpenny.