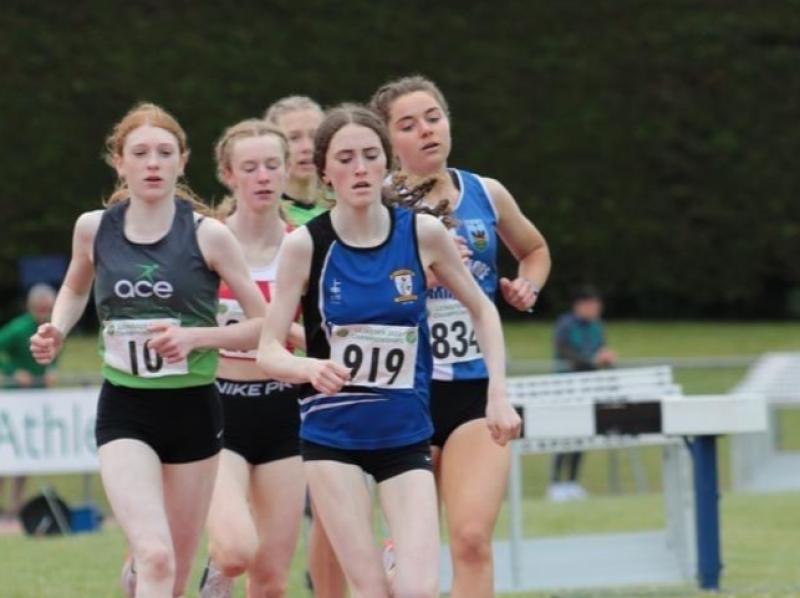 Dearbhla Allen, centre, competing in the Leinster U16 3000M Race. She would beat the chanpionship record on her way to winning the Gold

St Peter’s AC enjoyed fantastic success at the Leinster Juvenile Track & Field Championships in Tullamore. For a relatively small club, they showcased just how strong their coaching is as they came home with four Leinster Champions and a new record holder.

Sean Reilly was the first St Peter’s athlete to climb to the top of the podium when he pulled away from the rest of the field to storm to victory in the U17 boys 800M final to take the provincial Gold for the second year in succession.

The club hadn’t long to wait to see another blue singlet wear a Gold medal around their neck as Niamh Brady duly obliged in the very next race, leading from Gun to tape in the girls U18 race.

Having narrowly missed out via a photo finish earlier this year in the indoors, the win in Tullamore in the 800M race was sure to have meant a lot to the young runner.

Rory McLoughlin then made it a hat trick of 800M titles for the St Peter’s Club when he stormed up the home straight to take the first place in the boys U19 race.

Judith Bell once again delivered on the big stage when she ran an excellent race in the U18 100M sprint Hurdles race to take the silver medal which was very much deserved.

However, the outstanding performance of the day, from a St Peter’s perspective at least, was undoubtedly the performance of Dearbhla Allen in the U16 3000M.

Leading from the gun Dearbhla showed great tactical awareness in the first couple of laps to open up a lead which as the race progressed just got bigger and bigger.

With a couple of laps to go, the result was never in doubt and Dearbhla’s attention changed from the inevitable victory to breaking the Championship best record.

Cheered on by what seemed like the entire crowd in attendance, Dearbhla increased her pace and was full of running, storming up the home straight to absolutely smash the Championship record by some 52 seconds in a winning time of 10:27.94.

This was Dearbhla 2nd medal of the Championships, having won bronze the previous day in the girls U16 1500M race.

Elsewhere, Ava Plunkett had a strong run in the final of the girls U19 100M, finishing in fourth place which qualifies her for the National Championships. Ava was also part of the winning Louth U19 4X 100M relay team alongside club mate Judith Bell.

Harry O’Reilly had very strong runs in both the boys U16 800M and 1500M races, showing his undoubted potential in both. Harry has been unfortunate with niggling injuries which now hopefully are behind him.

Mark Litchfield was in the business end of the boys U18 800M race up until the latter end, but unfortunately just missed out on a podium finish. Yet crucially he showed during the early stages that he still Has a lot to offer in middle distance running.

Orla McLoughlin made a welcomed return to competition when she competed in the girls U15 long jump. She has had a long injury lay off and although this particular competition may have come too soon for Orla to be among the medals, it was very pleasing for her coaches to see her pull on the club singlet and take part in competition again.

The National Championships are up next for those who managed to qualify and will take place over the next two weekends in Santry, with all competing from St Peter’s well capable of pushing hard for All-Ireland glory.