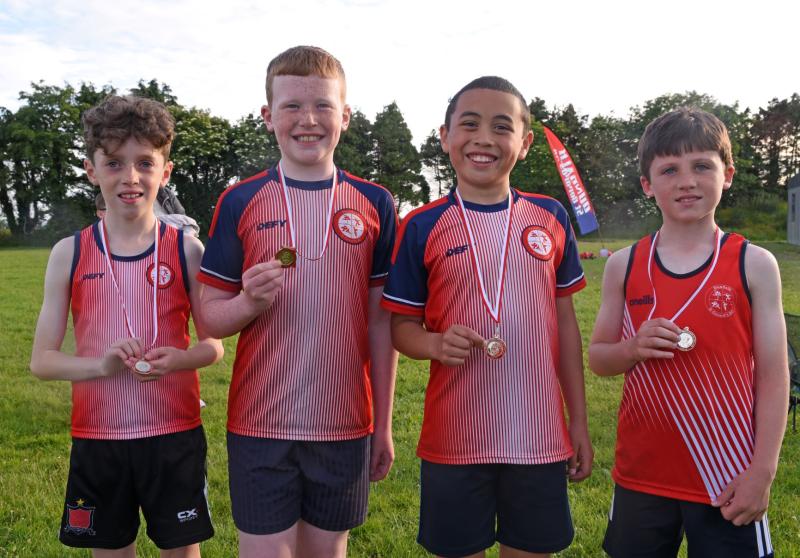 St Gerard’s AC took five teams to compete in the Leinster Juvenile Relay Championships in Leixlip, Co. Kildare. For the second consecutive Sunday, a bus load of enthusiastic young athletes left Dundalk in a bid to make their mark on the Leinster stage.

First up were the youngest athletes, the U9 Girls team, made up of Eabha Durnin, Grace Culligan, Hannah Reenan and Kourtney McKeever.

In their heat, the girls finished in 3rd place, demonstrating brilliant teamwork, qualifying for the Leinster final, a fantastic achievement for a team just formed in recent weeks.

The U11 Girls team were next up on the track, with Wren Kerley, Rebeccah Hughes, Kate McKeon and Aimee Quinn. The team ran a very solid race in the heat, finishing 3rd.

With 20 teams competing over three heats in this age category, the girls delivered a strong performance, narrowly missing on a place in the final shakeup.

Next for St Gerard’s was the U11 Boys Team. Ryan Dowd, Fane Kelly, Calvin McCourt, and Evan Cheshire were fancied to be in the mix for this Leinster relay event, following a run of excellent individual performances in recent weeks, including Gold for Calvin and Evan in the Leinster pairs.

The fab four took on the challenge with gusto, delivering a brilliant team display to take 2nd place in the heat. Qualifying for the final, the boys regrouped and took on some of the best teams in the province in the final.

In what was an enthralling race, cheered on all the way by the travelling DSG supporters, the boys put in a huge performance to take Leinster Bronze.

The Girls U13 event saw DSG’s team of Kasi McCarthy, Chloe Cheshire, Megan Hughes and Aoife Murphy represent the club with pride. In a whopping field of 24 teams, there were three packed heats, with the girls running in a very tough third heat.

The team ran very well, and while they didn’t progress to the final, they gave a solid account of themselves in a heat that contained the eventual gold and bronze medal winning teams.

The fifth and final DSG team competing at the Leinster’s was the Girls U10 team of Kate Fealy, Autumn Moran, Lucy Molloy and Katelynn Woods.

The excitement was almost unbearable as the Girls took to the track for heat one, the first of three heats with 20 teams competing. The DSG quartet ran a super race. Kate got off to a flying start on the bend, setting up Autumn to make great headway on the back straight.

Lucy ran a brilliant third leg, making more gains on the competition on the bend, setting up Katelynn for a brilliant finish over the final 100m. First place in the heat by a nose.

A nervous wait for the final ensued, and when it came around, the girls were ready. The team repeated exactly what they had done in the heat, with each team member playing a huge part, shaving almost a second off their heat time.

It was hand in mouth stuff as Katelynn powered down the home straight to claim 2nd place and Leinster Silver for St Gerard’s.

The Louth County Relay Championships for the Uneven ages then took place in Bush.  St Gerard’s enjoyed a great evening with five teams representing their club with pride.

The U9 Girls team, still in great form after their Leinster debut ran a great race, with smooth handovers and discipline, holding on well to claim 3rd place and county bronze medals for the delighted Eabha, Grace, Hannah and Kourtney.

Next up were the U9 Boys team. Pearse Murphy, Louis Behan, Thomas Hughes and Dylan McElarney ran well throughout, digging in to finish in second place to claim County Silver medals.

Wren, Kate, Rebeccah and Aimee regrouped after their Leinster showing and took to the track for the U11 Girls event. This race was run over two heats. The girls took 2nd place in the heat after a real battle to the line, qualifying for the final.

A very exciting final ensued, with the girls running a very strong race for a hard-earned place on the podium, taking home the County Bronze medals.

Following their podium finish at the Leinster’s, the U11 Boys Team – Ryan, Fane, Calvin and Evan kept up their recent brilliant form. Baton exchanges were solid, and the lads delivered fantastic individual sprints to bring the team home in 1st place in their heat, followed by 1st in the final.

The club was also proud to be represented by the Girls U13s team, with Kasi, Chloe, Megan and Aoife taking up the mantle again. It was a tough field run over two heats. The girls ran very well, taking third spot in the heat, qualifying for the final.