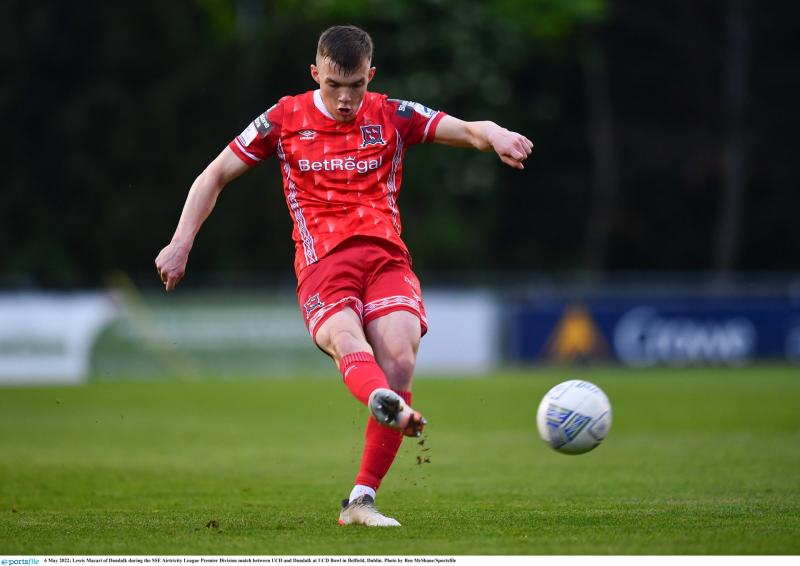 Speculation had been rampant that Lewis Macari would be returning to his parent club Stoke City despite being contracted to remain at Oriel Park until the end of June. (Pic: Sportsfile)

Following the 2-2 draw at the Belfield Bowl, it was a case of two points dropped as opposed to one gained, with Stephen O’Donnell’s side surrendering a 2-0 lead to The Students.

Via a deflection, ex-UCD midfielder Paul Doyle put Dundalk ahead in the first half, but they had to play with 10 players for the entirety of the second after another former UCD alumnus, Andy Boyle, was given a straight red card for a lunging tackle on Dara Keane.

“I need to watch it back properly again,” admitted O’Donnell. “It’s inside their half. Andy Boyle is not a dirty player. He’s gone to win the ball with a tackle, so I was surprised to see the ref bring out the red card. That gives them impetus going in at half-time. They’re playing against 10 men.”

O’Donnell’s side doubled their advantage from the penalty spot after Daniel Kelly had won a penalty which was duly converted by Dundalk leading scorer Patrick Hoban.

However, Republic of Ireland U21 international Colm Whelan gave UCD hope with a deadly finish shortly after Hoban had seemingly fetched all three points for the visitors.

“We’ve done well, worked it brilliantly. Pat (Hoban) and Dickie (Kelly) for the penalty, we go 2-0 up. The only aspect I probably am really disappointed with is we let them back into the game too soon, then gave them a lifeline.

“We didn’t have time to sit on our lead at 2-0 and they got a little bit of impetus from that. I didn’t think we gave up many chances at all against 11 men with 10 men.”

Then, the game’s big talking point emerged as UCD were awarded a penalty following an innocuous tangle inside the box between Robbie Benson and UCD forward Evan Caffrey.

“I was surprised. You never see incidents like that. It’d be different if I felt that both players were going to attack the ball and then both fell over, but the ball was going over both their heads.

“They weren’t going to be involved in the corner and Robbie slipped and the UCD boy has gone over with him and he’s given the penalty.”

Next on the agenda for Dundalk is a fixture against Bohemians this coming Friday night (kick-off, 7.45pm) at Oriel, where The Lilywhites still remain undefeated this season.

The Gypsies travel up the M1 on the back of claiming an impressive 1-1 draw against table-toppers Derry City at the Ryan McBride Brandywell Stadium over the weekend.

Dundalk and Bohs played out a 2-2 draw earlier in the season at Dalymount Park when O’Donnell’s side had to battle back twice via goals from Hoban and Steven Bradley.

“They’ve gone up to Derry and drawn. Bohemians have lots of good individuals, lots of attacking threat. We get recovered over the weekend and we look forward to the game now next Friday.

“We’re going into a little sort of four-game period before the mid-season break, so we’ll take Bohemians next week. As I’ve said, they’ve lots of good individuals.”

Dundalk have no fresh injury concerns for the visit of Bohs, with Dan Williams (ankle) and Boyle (one-match suspension) the only definite absentees at the time of writing.

Meanwhile Lewis Macari will not be returning to parent club Stoke City before his loan spell at Dundalk FC expires at the end of June.

A report in The Stoke Sentinel last week suggested the 20-year-old right-back, who has impressed throughout his 14 appearances for The Lilywhites this season, would be returning to the English Championship side.

Ex-Shamrock Rovers and Northern Ireland manager Michael O’Neill, now in charge at Stoke, is thought to be impressed with Macari’s progress since moving to Oriel Park, amid speculation that the Scotsman could be fast-tracked into first-team affairs there.

However O’Donnell insisted that Macari had not played his final game for The Lilywhites. “Lewis is on loan here until June the 30th.

“I didn’t see the article, but that was news to me, so nothing has changed in that department. I’ve not spoken to anyone from Stoke in regard to that, so I’m not sure where that’s come from, but the loan agreement is until June the 30th.”

Friday’s game between Dundalk and Bohs is to be refereed by Sean Grant (Wexford) and will be streamed via the LOITV online platform, with match passes costing €7 each.