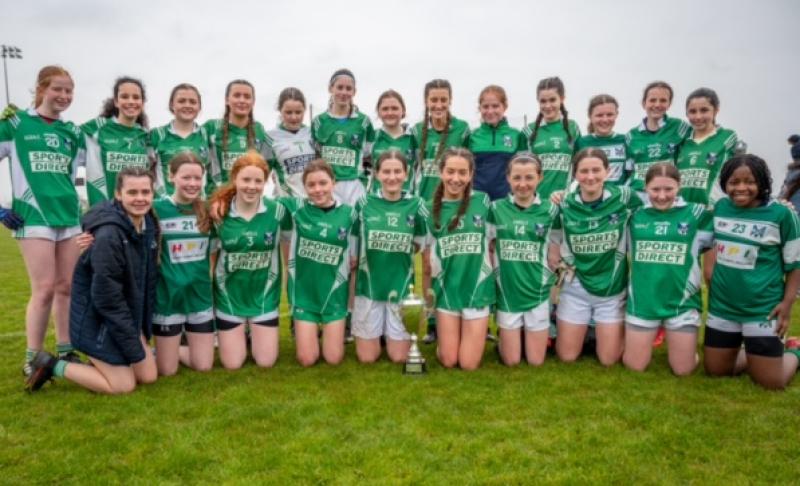 Louth LGFA hosted their Feile 2022 competition in Darver last weekend. Spirits were not dampened in the least by the inclement conditions and the approximately 400 under 15 competitors enjoyed a great day’s competition.

The four strongest clubs from last years under 14 competitions competed in the Division One of Feile. They were the Geraldines, Cooley Kickhams, Kilkerley Emmets and Hunterstown Rovers.

The Final between the top two qualifiers, Geraldines and Cooley Kickhams can only be described as another epic encounter between these two giants of Louth sport.

After 20 minutes of football, they could not be separated with Cooley Kickhams scoring 4-1 to the Geraldines 3-04. Extra time was called for, with the Geraldines adding three points without reply to emerge victorious on a final score of 4-4 to 4-1.

The Geraldines will represent Louth in the National Feile competition on Saturday 2nd July in Dublin/Kildare.

Division Two was comprised of eight teams spread over two groups of four. They were St Fechins, St Patricks, St Marys and St Kevins in one group and St Mochtas, Mattock Rangers, Newtown Blues and Glyde Rangers/Westerns in the second group.

After the round robin element, which was very competitive, with only a score or two between teams at the end of each match, the top team of each group qualified for the final with St Patricks defeating a competitive St. Mochtas in the final.

Division Three had six teams competing in two groups of three to reach the final. They were Wolfe Tones, Glen Emmets, Dundalk Gaels while the other group comprised of St Brides, St. Josephs and the Dreadnots.

On completion of the round robin series St Josephs and Glen Emmets progressed to the final with the Tullyallen girls emerging as winners on the day.

St Patricks and Glen Emmets will represent Louth in the Feile Regional competitions on Saturday the 4th of June at a venue to be confirmed.

Well done to all teams that competed so gallantly in what were difficult conditions to play nice football. Going by what was on show in Darver across all the divisions, the future of Ladies Football in the Wee County looks to be safe hands in the years to come.