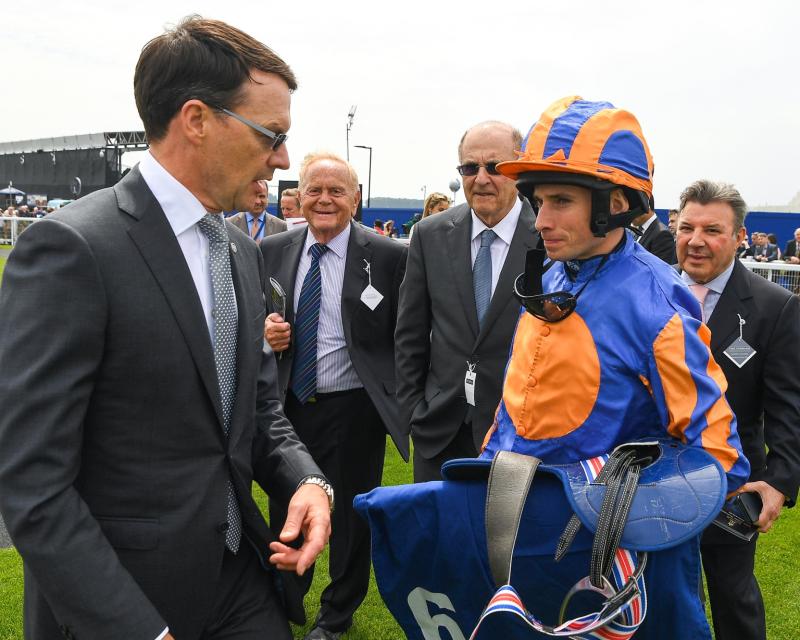 ChangingoftheGuard's trainer Aidan O'Brien, left, and jockey Ryan Moore, right, who combined in the prestigious Cheshire Vase. This is a major trial for the Epson Derby. (Pic: Sportsfile)

A Dundalk maiden winner has attracted significant attraction in the Epson Derby betting market, following a superb victory in the Chester Vase.

The race, which is a trial for the British classic, was won emphatically by ChangingoftheGuard, the style in which he won seeing his odds of winning the biggest race in the Flat racing calendar tumble hugely, from 50/1 to as low as 8/1 with some betting firms.

You just never know what might you might encounter when you go racing at the fantastic Dundalk Stadium. As Ireland's lone All weather track, Dowdallshill is the only place that can guarantee a sound surface, given our wet climate.

On a quiet evening last month, April 1st, the maestro of Ballydoyle, Aidan O'Brien, sent out ChangingoftheGuard for his season return at Dundalk for a maiden race (for horse yet to win), looking to see if he had the potential to improve as a three year old over the longer trip of 1 mile 2 furlongs.

He had yet to set the world on fire in his juvenile season, failing to win in three attempts over shorter distances, the best being a narrow loss in a Punchestown maiden back in September.

But on the polytrack surface, the Galileo colt looked a different animal, romping home in stylish fashion by six lengths, albeit against a field that will not be thinking of adding Group success to their names.

On Day One of the Chester Boodles Meeting, one of the marquee attractions was the Chester Vase, due to popular UK Trainer Charlie Appleby, essentially the Aidan O'Brien of Britain, being set to unleash his most fancied Derby prospect in New London for the first time this season.

Glowing reports were coming from the stable that he was something special and this was reflected in the price he went off at yesterday, a 4/11 odds on favourite. Before the race he was the second favourite to win the Epson Derby.

ChangingoftheGuard went off at 100/30 having been close to 5/1 at times with the Irish raider looking the biggest danger to the fav in this four runner race.

Ryan Moore rode the colt with plenty of confidence on this step up in class, the hope pre race being that front running tactics by a horse with a run already this season would catch out the fitness of New London in his seasonal bow.

He soon went clear in front having broke well from the stalls and quickened again when coming under pressure from the Godolphin owned horse two furlongs from home. In the end he coasted to a six-and-a-half-length victory.

Despite this win, he still looks to be only number two in the Ballydoyle Derby pecking order, with Luxembourg, who finished well to grab third in the 2000 Guineas and will more then likely improve more when tackling the longer trip at Epsom, currently the favourite.

However doubts over his fitness have come to light with it now being very possible he will miss the race. He has drifted in the betting as a result with ChangingoftheGuard coming in for support as a result. At the time of writing he was placed as the second favourite.