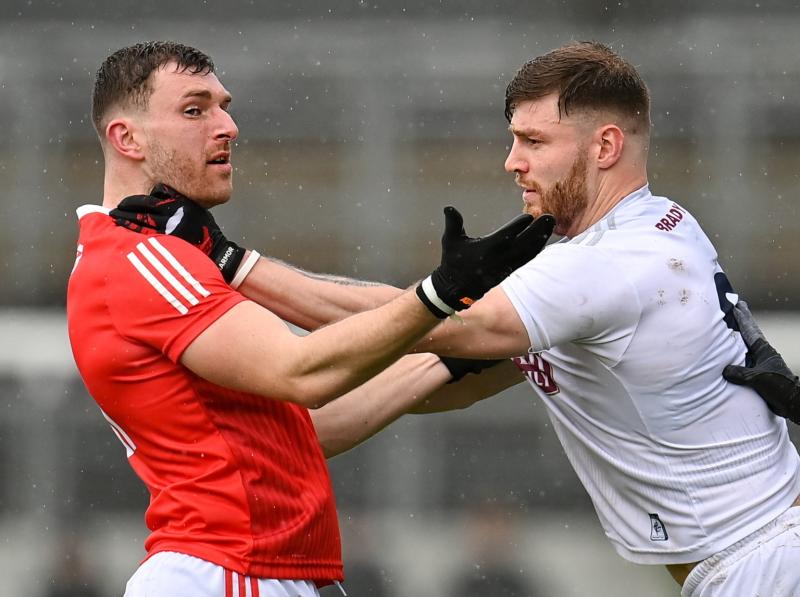 Sam Mulroy and Kevin O’Callaghan of Kildare tussle off the ball during the Leinster Football Championship Quarter-Final. (Pic: Seb Daly/Sportsfile)

The day in Tullamore was supposed to be different. Louth supporters as always travelled in hope against one of our favourable opponents of the past, Kildare.

That hope was built on deserved momentum of eight unbeaten games in a row. A promotion, a championship win too, but it counted for little when faced with this powerful Kildare outfit that will have their eyes firmly on the Delaney Cup this season and maybe more.

Louth were defeated by 16 points on the day in O’Connor Park and Mickey Harte’s biggest job will be regrouping his troops ahead of a tilt at the qualifiers at the beginning of June.

Despite the game the week previous, Louth found themselves trailing by seven points, playing catch up from that point onwards in the bruising encounter.

Ben McCormack started lively for Kildare on the forty as the hard running lily whites swarmed and pressed and dominated James Califf’s kick outs on every occasion.

Louth struggled to handle the intensity and failed to settle after Sam Mulroy missed two frees he would normally score. Kildare were seven points to the good with Daniel Flynn and Jimmy Hyland finding the target.

Conor Early eventually got Louth up and running after 19 minutes of action. In stark contrast, when Kildare half forward Paul Cribbin clipped over his first point on the 22nd minute, all the Kildare forwards had already found the range from open play.

Despite this dominance, Louth had chances down the other end when Bevan Duffy forced Mark Donnellan into a save and Liam Jackson had a goal disallowed for being in the square.

Those missed chances allowed Kildare to push on and take an eight-point lead, 0-13 to 0-5 at the turn. Flynn and Hyland adding to their impressive tallies while Mulroy found the target twice along with Ciaran Byrne before the Mochta’s man made way at half time.

In that run into half time Conor Grimes collected and finished a fine mark. That provided Louth’s best player on the day with some indication of what was to come as he fired over two points upon the resumption to give Louth some hope.

With the gap reduced to five, Kevin Flynn was lucky to stay on the field after an altercation with Tommy Durnin. Both sets of players joined in and a couple of tussles and ripped jerseys aside, you could be fooled to think Kildare were rattled.

With razor sharp focus Kildare looked to be only sizing Louth up as the revival was to be a short one. Daniel Flynn received a ball under the stand and took off like only he can with his powerful acceleration.

The mercurial full forward was hauled down for a penalty by a combination of Donal McKenny and Niall Sharkey. Kevin Feely clinically dispatched the penalty in the bottom right corner just centimetres from James Califf’s finger tips.

The three-pointer cancelled out all of Louth’s good work and at the same time the major was a hammer blow for the Wee County’s morale.

From that point forward, Louth were outplayed as Glenn Ryan’s charges controlled the tempo at all times. Kevin O’Callaghan pushed his weight about in the middle of the field, setting up attack after attack for the impressive men in white.

Indeed Ryan duly emptied the bench and Darragh Kirwan and Paddy Woodgate combined for 1-5 as Kildare ran out easy winners. Both players set the world alight in Division 1 of the National league, highlighting the depth Kildare possessed.

Kirwan scored a beauty with his first touch after Hyland pointed off the crossbar as Kildare would not relent in their hunt for places the next day out.

Louth looked to captain Sam Mulroy to save face on the scoreline and the Naomh Mairtin man did so with a brace as he was positioned closer to the square. A left footed point after he scooped possession one of the few highlights on a harrowing day.

Kirwan was on hand to finish a neat goal Woodgate created as Louth were chasing the contest at that point. Pats man Jack Murphy would score on his championship debut, but Louth would finish the disappointing day with fourteen men when Grimes picked up a second yellow card.

Their provincial hopes gone up in smokes, it now going to be a huge task to life Louth up once more for the All Ireland Championship. Mickey Harte wanted to see where his troops stood and how big of a gulf in class there will be next year when they join the elite in Division Two.

Sadly it could be a vast gulp and with only Limerick at this stage looking to be on a level playing field to Louth when looking at the other teams currently set to compete for the Sam Maguire. It could be another huge challenge that awaits them next month.