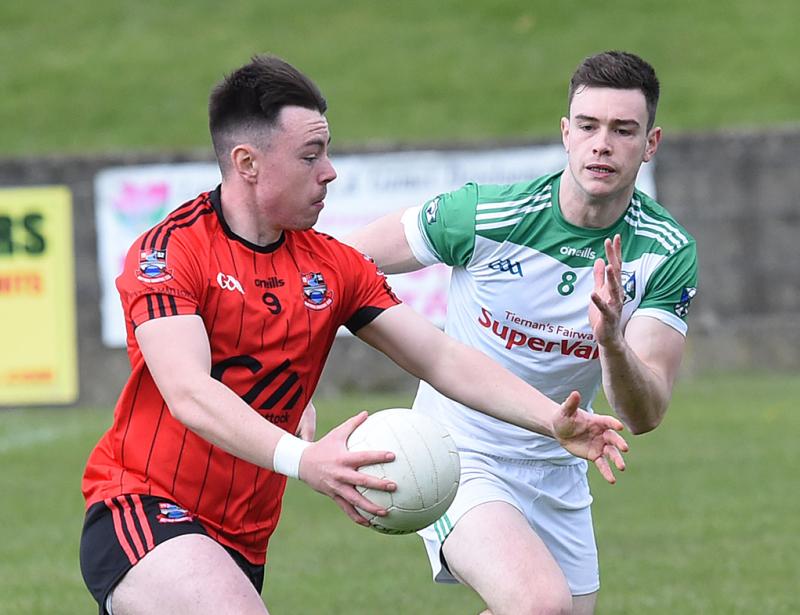 Hollywood Developments Division One Round Three

Mattock Rangers turned in an impressive second half display as they picked up their second win of the campaign to move top of the Division 1 table.

There was little to choose between the teams in the first half with scores hard to come by in the early stages. Liam Flynn was on target for the hosts but scores from Ben Gartlan and Beanon Corrigan replied to give the Gers an advantage.

However, the Collon men picked up the pace before the break and Cathal Fleming and Alan Caraher were on target to give their side a 0-6 to 0-4 lead.

Despite losing Ben Watters to a Black Card Mattock were able to get a grip of the game with an Aaron O’Brien ‘45’ starting a run of points that saw them stretch their lead.

A Ben Gartlan goal gave the visitors some hope in the final quarter but Flynn and Shane Hickey found the net at the other end to make sure of the victory for Mattock.

St Mochtas got off the mark in Division 1 at the third attempt as they ran out comfortable winners over Dreadnots at Louth Village on Saturday evening, inspired by goals from Ben Goss Kieran and Cormac Smyth.

After the disappointment of losing their opening two games, the Mochtas will be happy to get back to winning ways against a disappointing Dreadnots outfit. In their defence, the Dreadnots travelled with a depleted team and were unable to match the dominant hosts in the second half.

The game failed to catch fire in the opening half as the teams struggled to find their range in front of the posts and after a rather uneventful 30 minutes the teams went in level at two points apiece.

It was a different story in the second half as the Louth Village side got on top from the opening whistle. They made full use of the elements in their favour as they landed a series of points, including efforts from Gerry Garland and Ciaran McMahon, while goals from Smyth and Goss Kieran sealed a welcome win.

Two goals inside a minute at the start of the second half provided the platform for the Newtown Blues as they recorded a three point win over St Patricks.

The Pats went into the game looking for their first win of the campaign but despite a good performance, the goals from Ciaran Cluskey Kelly and Declan McNamara proved their undoing.

In what proved to be a lively encounter at Newfoundwell on Saturday, the hosts were quickest to settle and had the first three points on the board. However, that was cancelled out by a Danny O’Connor goal before Gavin Gregory gave the visitors the lead.

After the teams traded points, it was a late score from Tadhg O’Connor that saw the Lordship side extend the advantage to 1-5 to 0-6 at the break.

The Blues responded with the first point of the second half before Cluskey Kelly and McNamara put the Drogheda men in the driving seat and the lead was increased to seven early in the final quarter.

The Pats did give themselves hope with a Jason Woods goal and although they added points in the closing minutes they were unable to complete the comeback as the Blues held on.

A second half goal from Thomas Clarke helped Naomh Mairtin claim a two point victory over St Marys at Monasterboice on Saturday evening.

In a game where both sides were missing a number of regulars due to their involvement with the county panel, the hosts had been trailing by two points at half time, before Clarke’s goal but them in charge.

However, Ronan Carroll almost snatched victory in a dramatic finale, but he missed the target with a goal chance. The Jocks went into the game seeking their first win of the campaign and had first half points from Stephen Campbell, Wayne Campbell and Conor Whelan.

The decisive score of the half came from Tiarnan Corrigan as his goal sent the Marys in with a 1-2 to 0-3 lead.

The third quarter saw the teams exchange points as the Ardee men looked to have the slight edge, but Clarke’s goal changed the game. That score put his side one point ahead and two further scores had them three ahead entering the closing stages.

The visitors continued to battle to the end and pulled a point back through Darren Clarke and they almost snatched victory with Carroll’s late chance.

In a repeat of last year’s Intermediate Championship Final, St Fechins once again came out on top to as they remain among the early pace-setters in Division 1.

For Cooley it was another case of ‘what might have been’ as for the third successive occasion they came out on the wrong side of the result after a tight contest.

Goals from Paul Matthews and Ryan Walsh along with five points from Niall Devlin were crucial as the Fechins made it two wins from three outings.

Both goals came in the opening half as the hosts made a bright start but at the other end a goal from Patrick Johnston kept his side in contention by cutting the gap to 2-3 to 1-3.

St Fechins looked in control for much of the second half as they added a further eight points. Cooley battled to the end and Johnston’s late goal made it a nervy finish, but they were unable to complete the comeback as the hosts held out for victory.

The last game of round 3 was played late on Sunday night on the Point Road and it went emphatically in the way of the visitors as St Brides overcame an out of sorts Sean O’Mahony’s side who had won their first two games in the league.

Brides full forward Kevin Hearty helped himself to a goal in the first half and that major opened up the margin for the Knockbridge men to take control the contest from that point onwards. Ben McLaughlin did find the target for the hosts to make it 1-4 to 0-3 at the break.

In the second half, despite McLaughlin’s best efforts with a neat goal, the unbeaten O’Mahony’s could not pull back the deficit. Instead, county panellist Sean Marry picked off points at will to push Declan McCoy’s side joint top of the table along with six other teams.