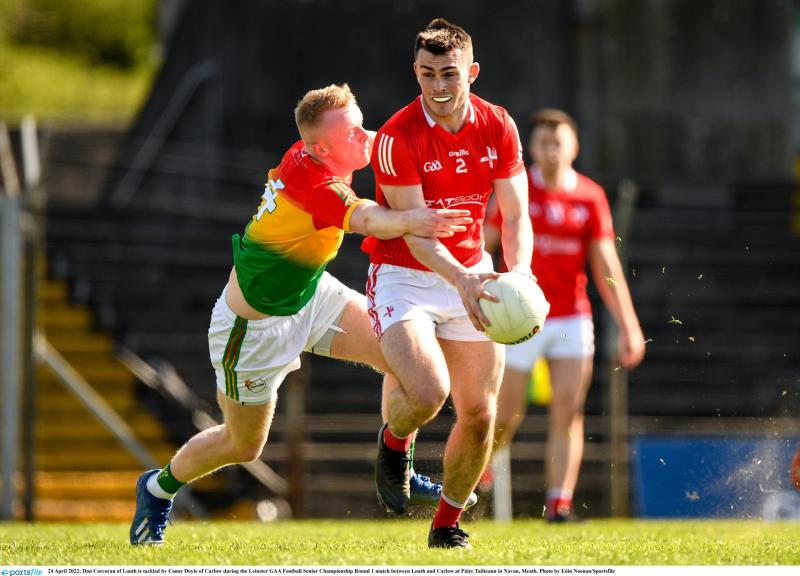 Dan Corcoran of Louth is tackled by Conor Doyle of Carlow . (Pic: Sportsfile)

Louth cruised their way into the next round of the Leinster Championship, five goals being decisive as they brushed aside the challenge of Carlow.

Conor Grimes, Ciaran Byrne, Sam Mulroy and Tommy Durnin all raised green flags, much to delight of a large traveling support as set up a date with Kildare next weekend.

Playing against a very stiff breeze, Carlow would retain possession for pretty much the entire first two minutes, having won the throw in. As they would do throughout the first half, they went though the phases, moving the ball patiently with a series of short passes.

In the end all that came from this was a poor effort in the corner from Colm Hulton. Louth countered at pace and took the lead courtesy of free from Sam Mulroy.

With the elements in their favour Mickey Harte’s troops moved the ball at pace, each player looking to offload the ball as quickly as possible with a high ball into the forwards being their main weapon.

Further scores came via Conor Early and Mulroy as the Wee County build up a three point lead after just eight minutes.

It didn’t happen often but when Carlow decided to move the ball fast via their pacey runners, they always looked like scoring. Josh Moore showed an ability to beat him marker any time he got some space to run, and he opened his side’s account on 12 minutes.

Carlow’s Achilles heel was their kick outs, Ciaran Cunningham on three occasions striking the ball directly out of play in the first 15 minutes alone as he struggled to get to grips with the wind. With this help Louth notched two more points via Ciaran Downey and Mulroy.

The Men in Red were cruising at this stage and two goals midway through the first half helped them build up an eight-point cushion.

The first goal came on 18 minutes, Conal McKeever won the ball in midfield from a Carlow kick out and duly launched a ball into Conor Grimes who from close range took no prisoners as he blasted it past Cunningham.

The second green flag was raised eight minutes later. Following a point from Darragh Foley, Harte’s troops immediately flew forward from the resulting kick out, the ensuing breakaway seeing Ciaran Byrne dribble the ball soccer style around the Carlow keeper and into the net.

The Barrowsiders didn’t buckle, keeping the scoreboard ticking with efforts from Foley, Niall Hickey and Jamie Clarke, yet by the break they still had a mountain to climb, Louth leading by 2-6 to 0-5.

Niall Carew’s side needed to act fast and with the wind would have been hopeful of sneaking their way back into the game.  They managed to get the half’s first score, another lovely solo run this time from Conor Crowley leading to him bagging a nice point.

While they continued to get the odd point, Carlow were failing to utilise the significant breeze, a series of poor wides from frees backing up this fact.

In comparison the Wee County were still flying high, playing a much faster version of Carlow’s earlier tactics against the wind and they were rewarded with a further three goals to put further gloss on the final score.

Their third goal came after 49 minutes, McKeever doing well to win a high ball under pressure before finding an inrushing Tommy Durnin whose bullet into the top left corner would have been hard to stop even if Carlow had the services of Alison Becker or Ederson, such was its quality.

The final two efforts came well after this tie was decided. On 61 minutes the Louth captain got in on the act, intercepting a poor kick out and duly burying it home with the calmest of finishes.

Three minutes from time an inrushing Bevan Duffy was brought down inside the square having been played in nicely by Mulroy. It was the Naomh Mairtin man who stepped up to the spot for the penalty. Try as he might Cunningham once again could not stop it.

In the end 15 points separate the sides, however there is still plenty to improve on ahead of the far greater challenge of Kildare next week.

Nine wides, three efforts dropped short of the target along with a giving away 18 frees. These mistakes will need to be addressed if Louth want to remain in the race for the Delaney Cup.