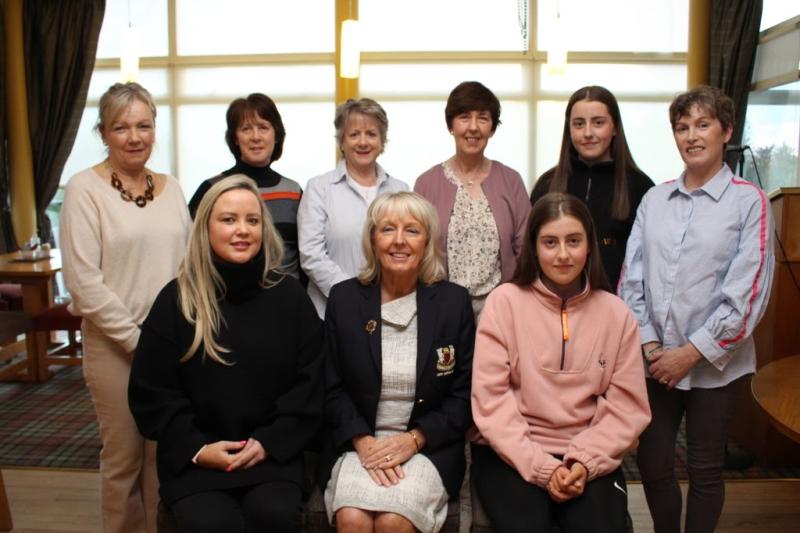 The winners in the Rawson Cup at Dundalk Golf Club, sponsored by Delux Bathrooms with Lady captain Alison Quigley

Hugh Thornton won the Singles Stableford competition held over the Easter weekend at Dundalk Golf Club and also led the 16 qualifiers for the Harry Walsh Cup, a matchplay competition for the club’s high handicappers.

Playing off 29, Thornton amassed a total of 42pts despite failing to score at the first and 13th. He had four-point pars at seventh, ninth and 15th and also managed three-point returns at the fourth, eighth, 11th, 12th and 17th as he went out in 22pts and home in 20pts.

In the end he had two points to spare over Ken Lynch (15) and Laurence O’Hanlon (16) who both finished on 40pts with Lynch taking second place on countback.

Com Garvey (20) also finished on 20pts but he lost out on a podium place through countback and had to settle for taking the Division 3 honours ahead of John McEneaney. Paul O’Callaghan (11) and Gerry O’Keefe (150 were the other divisional winners while Conor Curran with 37pts recorded the best gross score of the competition.

The Wednesday Opens, sponsored by Delux Bathrooms, continue to attract a sizeable amount of visitors and they scored their first overall victory of the season last Wednesday when Niall Conlon (20) from Mannan Castle shot 39pts to win by three from Shaun Callan (10).

There was a large entry for the first Golfer of the Year Competition on Saturday April 16 and Tuesday April 19. The Rawson Cup, sponsored by Deluxe Bathrooms, was won by Ruth Connolly, who shot a superb round of 68.

Ruth, playing off 19, played excellent golf to claim the winning spot. She went out in 47, but it was her back nine which proved pivotal. Coming home in 40, it included birdies on the 14th and 16th holes and pars on the 11th and 17th holes.

While Ruth took top honours, the best round of the competition was carded by teenager Katie Rowland, who shot 67. As juveniles are unable to win major competitions, Katie took top divisional honours in Division 1. Anne McArdle was the winner of Division 2 and Geraldine Hoare won Division 3.

Many thanks to Deluxe Bathrooms for their very generous sponsorship of this event and congratulations to all prize winners.