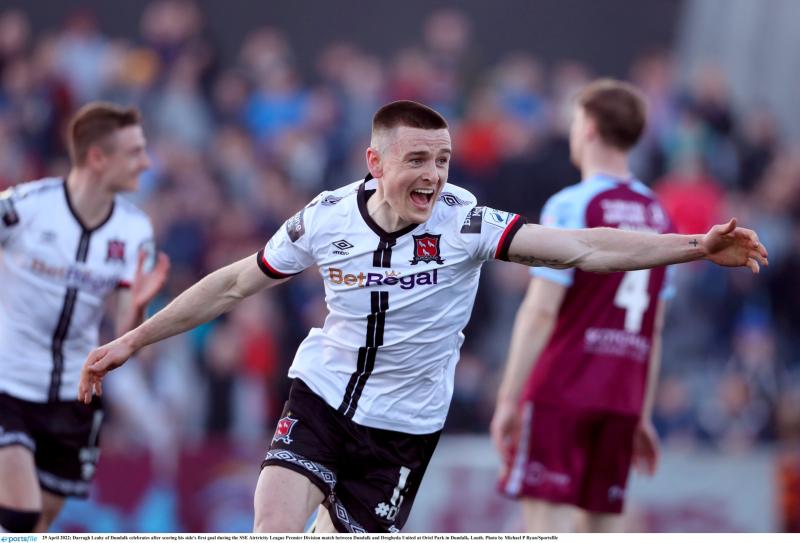 Dundalk FC emphatically moved up to third in the SSE Airtricity League table after thrashing their Louth rivals Drogheda United by a 4-1 scoreline at Oriel Park on Friday.

Having previously never netted for Dundalk in over three seasons, Darragh Leahy got on the scoresheet twice on the night, adding to Patrick Hoban’s goal from the penalty spot.

Ryan Brennan pulled one back for Drogheda late on, but that was only before John Martin bagged Dundalk’s fourth in the second minute of stoppage-time to make it 4-1.

Playing in the absence of the suspended Steven Bradley out on the right flank was Joe Adams, who sent in numerous dangerous crosses throughout the first half – and the Welsh U21 international was the source of Dundalk’s first big chance on 21 minutes.

A lovely delivery from Adams was met inside the box by Hoban, but his headed attempt was diverted over the top of the bar, with Drogheda goalkeeper Sam Long untroubled.

Ten minutes later, the Dundalk forward drilled a shot just wide after picking up the ball just outside the area, as The Lilywhites upped the tempo in search of an opening goal.

Indeed, that goal arrived on 39 minutes when after Keith Ward’s free-kick effort had crashed off the woodwork, the alert Leahy nipped in ahead of the static Andrew Quinn and Luke Heeney to head home and make it 1-0 to send the Oriel crowd into raptures.

Drogheda’s best chance of the opening half came a minute before the break when Georgie Poynton’s corner from the left was headed wide at the back post by Keith Cowan.

Dundalk should have made it 2-0 immediately after the restart, with Sean Roughan’s miscued header allowing Ward to race through on goal, but the Dundalk playmaker lost his footing at the last moment and skewed wide in what was a real let-off for the visitors.

Roughan was at fault as Stephen O’Donnell’s side doubled their lead on 51 minutes, making a hash of a Lewis Macari low cross before Leahy popped up to score his second.

The hosts made it three from the penalty spot after Cowan was adjudged to have handled in the area under pressure from Ward, with Hoban confidently dispatching from 12 yards out, sending Long the wrong way as he finished into the bottom left-hand corner.

Drogheda did find a consolation three minutes from time when Brennan lifted the ball over Dundalk goalkeeper Nathan Shepperd after receiving a pass from Dylan Grimes.

However, it was The Lilywhites who had the final say, as for the second week running, Martin – via an Adams assist – scored off the substitute’s bench in the closing stages.