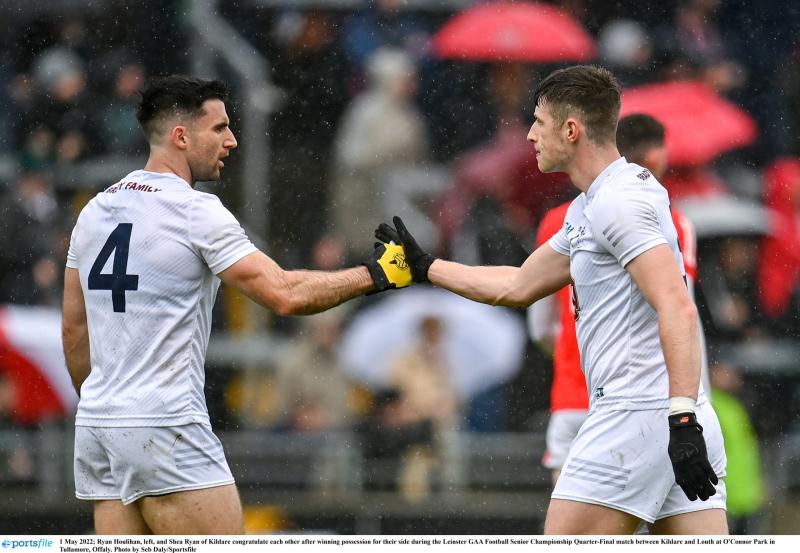 Ryan Houlihan, left, and Shea Ryan, both of Kildare, congratulate each other. (Pic: Seb Daly/Sportsfile)

It was a disappointing defeat for Louth, as once more they exited the Leinster Championship before really getting going. Kildare were relentless in their attacks and sadly the Wee County just couldn’t cope.

“We genuinely thought we could win that game” stated Bevan Duffy when speaking exclusively to the Democrat. “Having put a lot of thought and a focus into it, we thought we had a gameplan that could get us a result.

“Obviously that didn’t materialise in the end as we got a good beating which was hard to take as it was tough going. That was a steep learning curve of the levels we are trying to get to, which makes this result a bitter pill to swallow.

“They were so clinical in the first half, their shooting was incredible, it seemed like they couldn’t miss. But you learn from these days, the level they played at in Division 1, while we are competing in Division 3. The stark difference really showed up.”

But it wasn’t just on the scoreboard that the St Fechins man was impressed by the opposition. He was blown away by their overall fitness. They were far more physical than Louth were and that made life very difficult for them all over the pitch.

“You learn a lot from games like that. It is an eye-opening experience for a lot of lads, as physically and condition wise, they were clearly a few years ahead of where we currently are as a squad.

“Even just looking at turnovers, we would give them the ball with sloppy passes, poor mistakes or handling errors, which they didn’t really do.”

The depth at Kildare’s disposal is what really shocked Duffy. In his mind the big difference between Louth and the bigger teams is the fact it is not just the odd player who is fit, it is everyone involved in the panel.

If you are with a top Division 1 team, whether you are the first man on the team sheet or barely making the matchday panel, you are just as primed for the big day. He can see Louth getting to this level but stressed it will take time.

“What you really notice against these bigger teams is how physically conditioned 1-30 is in their panels, whereas as within the Louth squad we are still on the road to there. A good few lads are already at the level of conditioning needed, but getting 30 lads there is the real challenge.

“This is what is in the works and plans are already in place, but it does take a long time, it takes three to five years of hard work to see those benefits.”