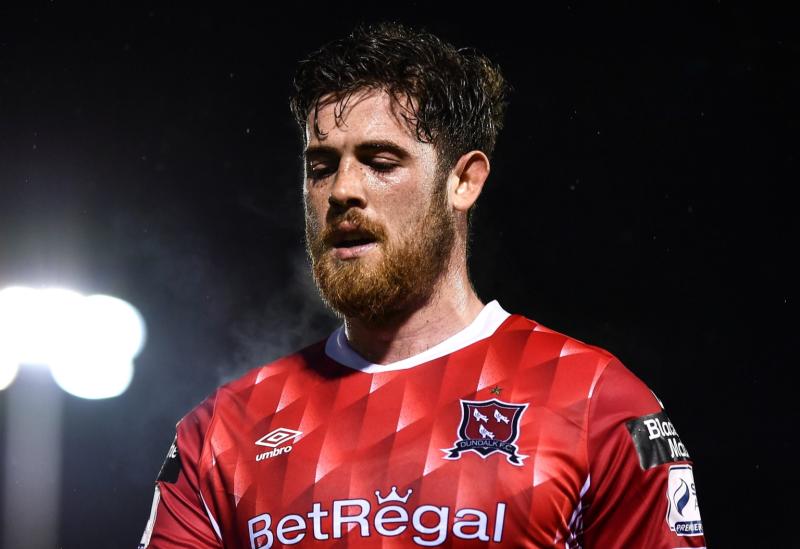 Niall Newberry at the Belfield Bowl

Dundalk FC remain winless on the road in this season’s SSE Airtricity League after throwing away a two-goal lead to draw 2-2 at bottom-of-the-table UCD on Friday night.

The Lilywhites were in control when Patrick Hoban’s second-half penalty added to Paul Doyle’s opener against his former club on 18 minutes. However, the courageous UCD battled back to collect a point, courtesy of two goals from their top scorer, Colm Whelan.

UCD had the first chance when some hesitancy from the normally reliable Nathan Shepperd afforded Whelan a shot on goal, but luckily for The Lilywhites, Andy Boyle was on hand to head off the line before Michael Gallagher’s follow-up was deflected wide.

Hoban was the source of Dundalk’s first attempt moments after that, but his low drive from distance was straight at UCD goalkeeper Kian Moore who was untroubled.

Stephen O’Donnell’s side went ahead on 18 minutes when Keith Ward’s corner from the left wasn’t properly cleared by the UCD defence which allowed ex-UCD man Doyle to fire through a body of players from outside the box and score his first goal for The Lilywhites.

The Students almost equalised five minutes before the half-time break when Jack Keaney headed just over the top of Shepperd’s crossbar from a set-piece before at the other end, Lewis Macari fired straight at Moore following a lovely set-up from Ward.

The game turned on its head in first-half stoppage-time when Boyle went in late for a challenge with Dara Keane which resulted in the defender picking up a straight red card.

Despite being down to ten players for the second half, Dundalk won themselves a penalty on 54 minutes when Daniel Kelly was cynically fouled inside the box by Eric Yoro.

Up stepped the ever-dependable Hoban, who sent Moore the wrong way to make it 2-0.

However, UCD got themselves back into the contest on 59 minutes when Whelan finished neatly after Mark Dignam’s cross had caught the Dundalk backline napping.

Astonishingly, the hosts were given the opportunity to level matters 15 minutes from time when Robbie Benson was adjudged to have brought Evan Caffrey down inside the area before Whelan made no mistake from the spot to score his second goal of the night.

Dundalk had chances to restore their lead in the closing stages, but Darragh Leahy’s shot was kept out by Moore, while Sam Bone’s rasping effort crept just wide on 90 minutes.