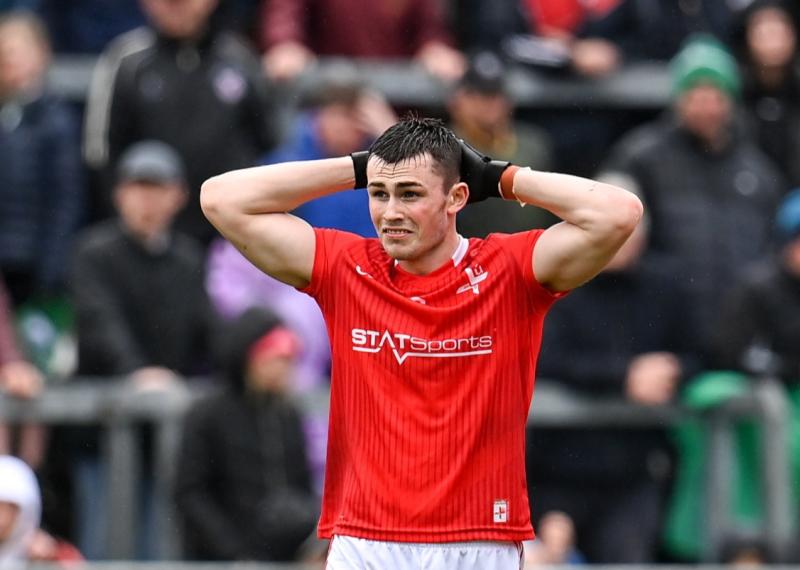 A dejected Dan Corcoran during the Louth and Kildare Leinster Championship match in Tullamore. (Pic: Sportsfile)

Welcome to the higher echelons. Having swept all before them in league football over the past two seasons, twice winning promotion, the Louth senior footballers moved up a few grades to take on Kildare in Sunday’s Leinster Championship Quarter-Final. It wasn’t a pleasant experience.

On a day when getting most things right was essential to have any chance of upsetting the odds, Louth found trying to eke a win against a much superior team way beyond them. Sixteen points divided the sides at the finish, and while Louth hadn’t much luck around goals, twice being denied a three-pointer, Kildare weren’t flattered by their winning margin.

Kildare competed in Division One of the most recent league and were just a little unlucky to be relegated. They beat Dublin and Monaghan and drew with Kerry, the eventual competition winners.

That had them on a much higher plain than Louth, and in this game, played at Tullamore’s O’Connor Park before a disappointingly small 5,308 crowd, it showed.

The Lilies had so much more going for them. They were physically stronger – in this writer’s view one on the sturdiest ever to wear the white jersey – and used all of their physicality to easily contain the Louth forward-line, dominate midfield, and up front, put them over from all angles as well as take their goal chances, one of them from the penalty-spot.

Kildare had seven points on the board before Conor Early got Louth’s first point 18 minutes from the throw-in. They were eight points clear at the break, and the only time they put in a slight wobble was when Louth came in with three early second half scores.

By then, The Wee County had a first half goal disallowed for a square-ball infringement and Bevan Duffy failed with a close-in shot ten minutes earlier, though it must be said goalie Mark Donnellan was brilliant in keeping the St Fechin’s player from putting his name on a major.

Had the goal been allowed and Duffy’s shot gone in, Louth might have been able to build some momentum, get closer and maybe not finish so far behind. But these were just two instances when they got it wrong.

Except for that bright second half opening Louth were always trying to keep pace with a team that might just have the better chance of the three remaining challengers of dethroning the Dubs in Leinster.

Next up is the All-Ireland championship, the first round of which takes place on the first weekend in June. Going strictly on league form there’ll be only one other team of equal status to Louth going into the draw, unless the likes of Westmeath or Cavan can make it to a provincial final. That’s Limerick, the other promotion-winners from Division Three.

Though he’s one who has never lacked positivity, Mickey Harte will have his work cut out trying to lift spirits after Sunday’s walloping. He’ll have no alternative but to go with much the same fifteen, hoping it’s not a team of Kildare’s calibre that’s in the other corner.