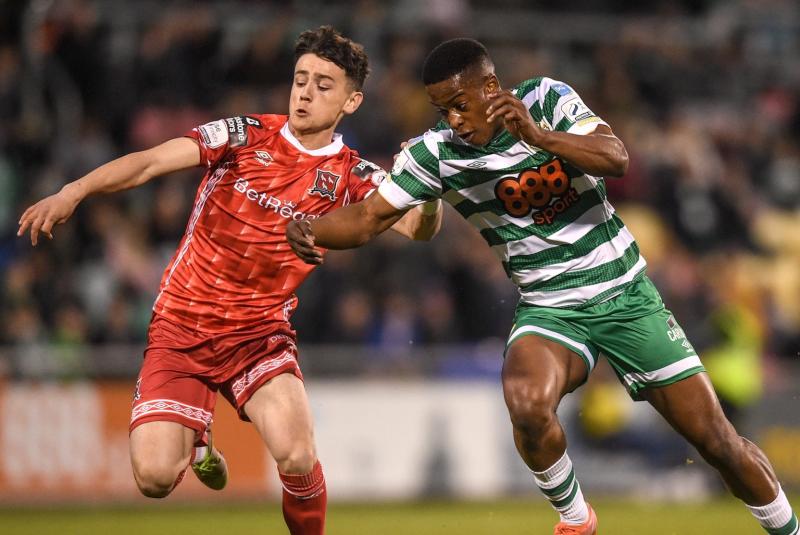 The Airtricity League’s first round has passed and no word from Jim McCourt. The wonder is has this most avid and possibly longest-serving of supporters yet to make his seasonal Oriel bow?

When Jim last came through – that was before the league got underway – the chat was more about All-Ireland hurling champs, Waterford’s Ballygunner, than Dundalk FC.

When on about the Town, he was either expressing reservations about his return, or waiting for the weather to get a wee bit kinder than it was at the time. I’m not sure which.

But then, having taken pride in the achievements of the club founded by his uncle, James McGinn, Jim might now be devoting his full attentions to the fortunes of the Waterford county team, to which Ballygunner supply a number of players.

But I doubt it. If he has, he’s had plenty to cheer about, the Deise winning the National League and still in the hunt for championship honours.

In the absence of Jim’s up-to-dates on the Lilies, the papers are being scanned, as always. And then there’s this Dundalk Gaels clubman, who, when he’s not at games on the Ramparts or other pitches around the county, hangs out in Oriel’s Shed. His opinion is sought, and, might I add, respected.

That said, I really should put in an appearance at Oriel myself. When I was last at a league match in Oriel, Joe Ralph was trying his luck as a goalie, Bohemians’ Willie Browne was the best centre-half in the country and Coad’s Colts, the name given to the all-conquering Shamrock Rovers, except in 1958, were a treat to watch.

I’ve been back a few times since, but only to meet and have my photo taken with my namesake, Joe O Cearuill, and see one of the next generation play in an under-age final with Bellurgan FC, and most recently to collect a Dundalk European competition programme for one of the latest generation.

And there was also a chat with the chap Stephen Kenny took over from, Darius Kierans, for the questions-and-answers series which used to run on these pages.

My Gaels pal is not expecting big things this season – third place in the league and a decent run in the Cup, enough to qualify O’Donnell’s team for Europe, would keep him happy.

I made the point to him that having looked on last season – aghast, maybe – while former Oriel players were starring with championship-winning Rovers, supporters find themselves doing much the same again, this time as those they once shouted for make waves with high-flying Derry City.

His answer? Enigmatic. He has enough confidence in O’Donnell to believe he can build a competition-winning side. There have been some good buys, and along with survivors from the Kenny and Perth era, a team to match the Cup and league winners of the last decade can be moulded together.

Ryan O’Kane is among them, and here’s a young man whose progress I’m monitoring. When told he was a local, I enquired was he a son of Tony, a chap with whom I shared a CBS classroom and also lined out with on the Carrick Road Gaelic football team. (We’ll come back to that outfit at some other time.)

No, I was told, he’s a grandson. And I thought to myself: wait a minute, I should have known that since myself and Tony are around the same age, neither of us needing to worry about the fare when travelling to Dublin on the train or Matthews’ bus.

Anyway, Ryan is in the same category as Shane Grimes, who was part of Stephen Kenny’s panel. And there was also several from around town on the team that brought the FAI Cup to Oriel two decades ago, team captain David Crawley among them.

Ryan’s a true home-bred, the only one in O’Donnell’s outfit – though set up in town, having married a girl from here, Brian Gartland will probably soon be saying: “Right, am away” whenever heading home from training, or “Well, how’s it going?”, as a greeting for a pal.

“One Last Shot”, the life of Brian – so far – is on your favourite bookshop’s shelf. I’ll be buying it and will be interested to see if he gives any mention to his father-in-law, Pat O’Brien’s Sean O’Mahony’s football club.

I’m not sure, but I think Pat had always harboured hopes of the big man one day lining out in the green-and-gold at the real San Siro. That’s not Milan’s, but the one down in the Quay.

Young Ryan, who created a huge impression when he top-scored for the Dundalk Schoolboys team in the prestigious Milk Cup and also wore the Bellurgan jersey as a teenager, has Irish League experience with Warrenpoint. Expect him to take it with open arms if given a starting spot by O’Donnell.