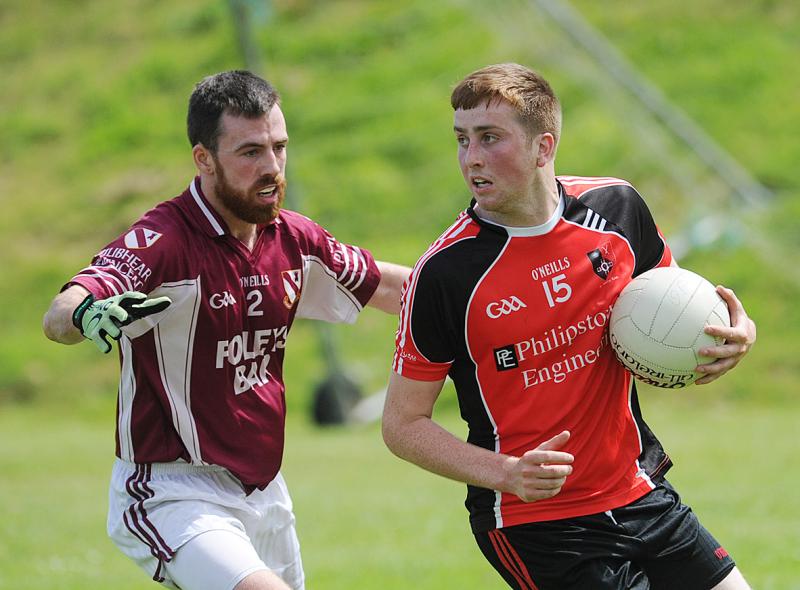 A hat-trick from Cathal Ferriter inspired Young Irelands to a comfortable win over Naomh Fionnbarra in Dundalk on Thursday night.

After picking up a draw in their opening game, the Dundalk men deservedly scored their first win of the league season and ensured that the Finbarrs’ difficult start to the season continued.

The teams traded points for much of the first half with Ciaran Markey on target for the visitors, but it was Ferriter’s eye for goal that proved the difference as his brace saw the Irelanders lead by 2-5 to 0-5 at the break.

The Ballygassan side were unable to threaten that advantage as the Dundalk men continued to dominate in the second half. Ferriter made sure of the points for his side by completing his hat-trick. Cian O’Donoghue also found the net as his side cruised home.

St Josephs edged out Kilkerley Emmets in an entertaining encounter at Cluskey Park on Saturday night to record their second successive league win.

In a game where the sides were level on six occasions and with no more than two separating the sides until the final 12 minutes, it was the Joes who produced the strongest finish to come out on top.

Fionn Cumiskey and Daire Smyth traded early scores before a point from Fintan Brady helped move the Emmets 0-3 to 0-1 clear.

The Joes then landed a major blow when Conor Neary got in for the only goal of the game. However, the visitors were on top in the run in to half time as points from Cormac Bellew and Brian Brady had them 0-7 to 1-3 ahead.

The Joes regained the lead early in the second half through Craig Doherty and Alan McKenna and as the game entered the closing 12 minutes, they had retained that one-point advantage.

The Joes then picked up the pace and made sure of the win thanks to late scores from Evan McEnteggart, Smyth and Doherty, while Jordan Mackin played his part in the win with a fine save.

O’Connell’s got their first victory of the season when they had seven points to spare over Roche in Páirc de Róiste last Saturday evening.

Niall Conlon opened the scoring for the visitors with a point from a free but Mark Byrne got the equaliser for the home side a minute later.

O’Connells got the first goal of the game when Bernard Osborne found Cian Doyle and he turned his man and blasted his shot to the net to help his side lead by 1-3 to 0-3 at the end of the first quarter.

Roche then took full advantage of a black card for Andrew Keenan as they hit five unanswered points with Byrne and Dermot Carthy on target, to lead by two.

However, the Bellingham side finished the half with three pointed frees from Robert Quigley to lead by 1-6 to 0-8 at the break.

The game remained in the balance in the early stages of the second half as the team’s traded points, but the O’Connell’s struck a major blow when Doyle added a second goal.

Points from Shane Byrne and James McArdle kept Roche in the game but the O’Connell’s responded with a point from Doyle and a goal from Osborne to put his side seven points clear.

Eugene Murray pulled a goal back for Roche with time almost up but in injury time the O’Connell’s sealed victory when Doyle completed his hat-trick.

St Kevins’s showed some real class in landing seven goals past winless Oliver Plunketts who now find themselves bottom of Division Two. The Drogheda side kicked 14 wides on Easter Sunday.

Despite Stephen Keeley finding the net unimpaired frees from Lee Crosbie kept St Kevin’s ticking over as they went into the break leading 3-4 to 1-4.

The Philipstown men didn’t relent and Callan helped himself to a hat-trick of goals in the second half as well as an assist for Ronan Sands at full forward. A tough loss for the Plunketts, who will look to regroup in the coming weeks.

Two goals last week and two goals again this week for Dundalk Gaels forward Thomas O’Connell has his side remaining unbeaten in Division Two with an away victory over Hunterstown Rovers.

Hunterstown never led in this league tie and the Gaels were excellent throughout. Mark Hanna clipped over the first point and Dylan McKeown added to the dominance. Rovers, against the Breeze, struggled for scores in the opening half, going 20 minutes without a score.

Just before the half McCann burst onto a ball on his own 21 yard line, drove out with possession before playing a pass to Luke Murray who returned the ball to McCann to kick the final point of the half. Cathal O'Hanlon's men led 0-5 to 0-1 at the half.

Hunterstown registered the first score of the second half to leave three points between the teams. The Gaels then had a goal chance, McCann's effort was well saved by the home keeper Donovan Sheridan.

Colm Donnelly’s home side cut the gap to two upon the resumption but moments later, O'Connell won possession, spun his marker and made absolutely no mistake blasting to the back of the net.

Hunterstown responded with the next two points, the Dundalk men would not be caught. Andrew Curley played a magnificent pass with the outside of his foot into McKeown who played it into the run of Hanna to finish to the net.

O’Connell would score his second goal and Rovers relied on youngsters James Rogers and Colm Murphy to find the target from the bench in what was a meek finale to the game.