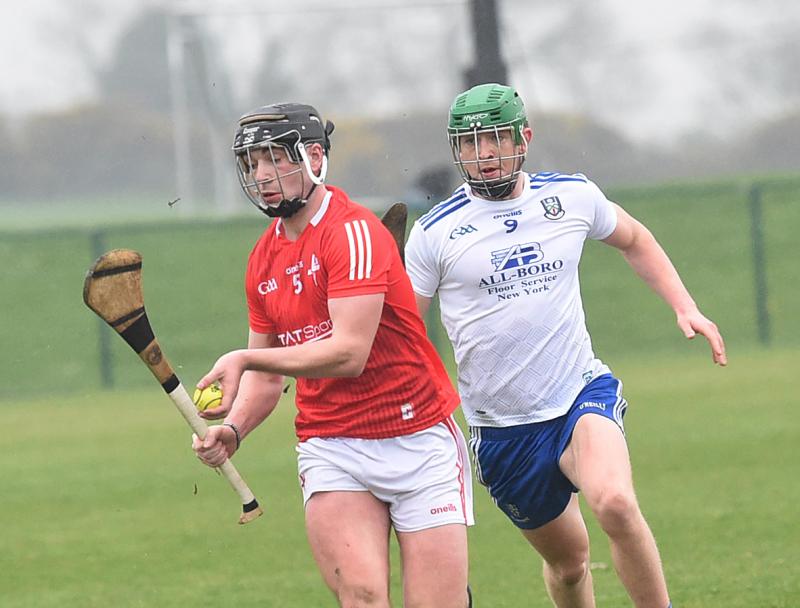 Louth's Liam Molloy gets the better of Monaghan's Declan Hughes in the Lory Meagher Cup round two game in Darver. (Pic: Arthur Kinahan)

Having recorded contrasting victories in the opening round a week earlier, these two sides knew that a second win would strengthen their position at the top of the Lory Meagher Cup standings.

Louth had 20 points to spare against Lancashire while the Farney men scraped past Cavan by a solitary goal. Monaghan came out on top in their recent league meeting by seven points and that was their margin of victory again at the Darver Centre on Excellence.

This game had everything, from two black cards, a rarity in hurling, a red card, three penalties, eight goals and for good measure heavy rain which made conditions difficult for both teams, particularly in the second half.

Corner forward Thomas Hughes opened the scoring with a point for the visitors after just 30 seconds. He added the game’s opening goal two minutes later when coming in from the left he beat keeper Ruairi Morrissey at his near post.

That lead was soon five before the home side responded with a goal of their own on eight minutes when the lively Mark Gahan volleyed home from close range.

Centre half Conor Gernon and Liam Molloy then exchanged points before Monaghan opened up a four point lead on 13 minutes with successive points from Hughes and a long range effort from Mark Treanor.

A foul on Paul Matthews saw Gahan reduce the deficit with a point from the resultant 20 metre free. Unlike the previous weekend Louth struggled in front of the posts and had accounted for five wides before midfielder and captain Feidhelm Joyce grabbed a good score just inside the 65 metre line.

Seaghan Conneely was instrumental in Louth's next score as he played Paul Matthews through before being upended to earn his side a penalty. Gahan netted the resultant penalty to tie up matters on 27 minutes, 2-3 to 1-6.

Thomas Hughes continued to be a handful for the Louth defence, especially with his pace, and he got through again, firing high to the net for his sides second goal of this half.

Treanor and Joyce exchanged points before the home side were awarded a second penalty. Paul Matthews was denied a clear goal scoring opportunity with the referee showing keeper Hugh Byrne a black card resulting in ten minutes in the bin.

Mark Gahan fumbled his lift and the opportunity passed. Louth accounted for two injury time points from the sticks of Gahan and Joyce again to leave their side trailing by just the minimum at the break, 2-7 to 2-6.

A brace of close range frees from Mark Treanor extended the visitors lead before Louth drew level on 40 minutes, as Sean Kerrisk soloed through before firing an unstoppable shot past stand in keeper Dylan McAree.

Thomas Hughes and Treanor kept the score board ticking over for the visitors with further points from play.

Paul Matthews responded with a point from close range on 43 minutes, however two minutes later following a discussion between the referee and his umpires, the St Fechins man was on the receiving end of a red card for what would have appeared to have been an off the ball incident.

To make matters worse Monaghan then struck for their third goal on 47 minutes when a goal mouth scramble ended with the ball in the net accredited to Mark Treanor.

Despite goods points from midfielders Gahan and Joyce the home side still trailed by three before the games second black card flashed to Louth corner back Adam Plunkett resulted in a penalty.

Keeper Hugh Byrne took the responsibility and gave his opposite number no chance, 4-12 to 3-9. By this stage Darren Geoghegan had being introduced as a substitute, making a welcome return from injury and he accounted for a brace of points to leave four between the teams on 60 minutes.

Monaghan wrapped up the win and the valuable points at stake with a fifth goal late in the game, scored from close range by substitute Pauric Malone.

Paul McCormack's side are back on the road next Saturday afternoon when they travel to Pearse Park to take on the home side Longford at 2pm.

Louth will be confident of getting back on the winning trail against a Longford side who only saw off Lancashire by two points on Saturday afternoon.