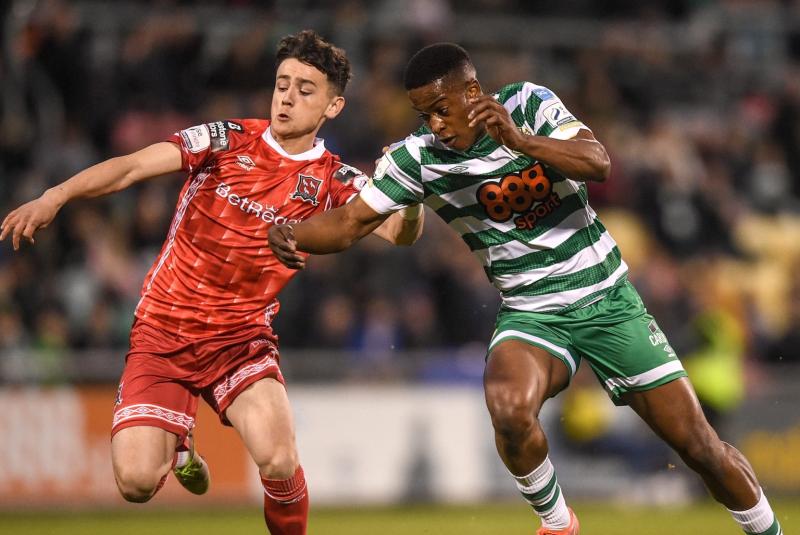 Dundalk FC suffered a second defeat of the season as they lost 1-0 to Shamrock Rovers.

Danny Mandroiu’s 66th-minute goal gave The Hoops what was a deserved win which meant The Lilywhites slipped back into fifth place in the SSE Airtricity League standings.

Keith Ward was one of five changes made on the night, and it was his set-piece which yielded the game’s first chance inside four minutes when Daniel Kelly – playing as a lone striker – headed off the crossbar after Rovers had failed to deal with the delivery.

However, it was the hosts who had the better of it for the remainder of the opening half, with Dundalk goalkeeper Nathan Shepperd saving Sean Hoare’s header from a corner.

Shepperd has earned much plaudits so far this season and he was tested again, pushing away Sean Gannon’s effort before the follow-up from Dylan Watts was flashed just wide.

The Welsh U21 stopper was at full stretch when Mandroiu – in acres of space – hammered wide from distance, while shortly after that, the Rovers man curled off target.

Despite that Rovers dominance, Dundalk could have taken the lead against the run of play on 37 minutes when from close range, Kelly was denied by the feet of Alan Mannus.

Jack Byrne fired a shot straight at Shepperd not long after the half-time break finished, as Dundalk’s struggled to get a foothold on this game as it carried into the second period.

They were made to pay on 66 minutes when Byrne’s incisive ball sliced open the Dundalk rearguard, allowing Mandroiu through on goal to finish past Shepperd.

Rovers substitute Aidomo Emakhu almost made it 2-0 when his effort trickled wide, while Dundalk’s misery was compounded when skipper Brian Gartland was given his marching orders for picking up a second yellow card with three minutes remaining.