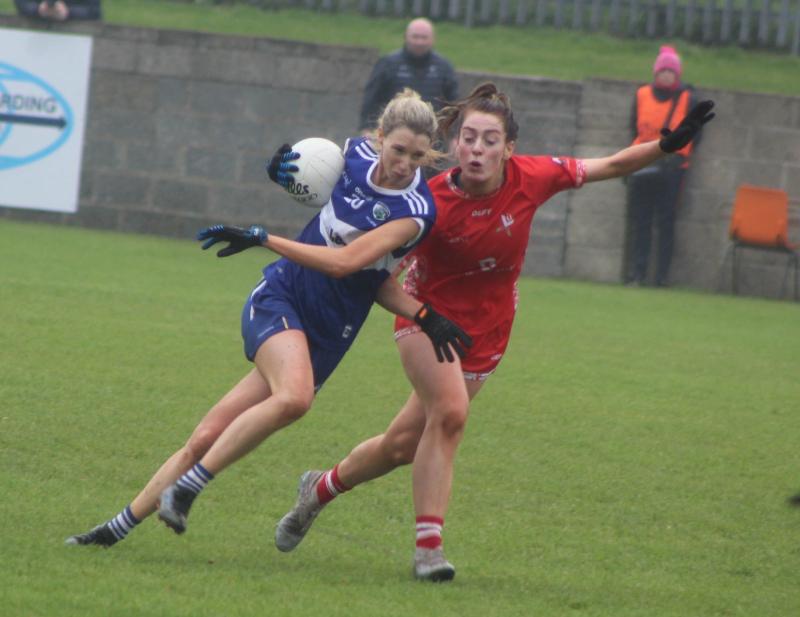 The Louth Ladies began their 2022 Leinster Intermediate Championship with a defeat, a 35-minute spell without a score proving costly in what was a low scoring affair at a wet and windy Clan Na Gael Park.

The Wee County took an early lead courtesy of a sublime goal from Aoife Russell, but from here they conceded 1-4 without reply to go in at the break four points down.

To their credit, the Girls in Red rallied in the second half, a second goal from substitute Rebecca Carr reigniting their challenge. Sadly, a three pointer from Mo Nerney created a cushion Laois didn’t relinquish.

In difficult conditions it was Louth that grabbed the opening score, Aoife Russell won possession around the middle of the park and duly soloed forward. She easily brushed aside two defenders before blasting it into the back of the net on three minutes.

Unfortunately, from here the chances for the home side were slim, Laois effectively starving them of possession for large periods of the first half. They favoured moving the ball slowly, utilising a series of short passes to stretch the Louth defence and create space to shoot.

A running game was Wayne Freeman’s troops best weapon, but Laois were defending space very well, leaving the pacey attackers like Russell and Ceire Nolan with nowhere to go. Their kicking game was not up to Louth’s usually high standards, leaving their full forward line very isolated.

The O’Moore County responded to Louth’s early goal with 1-1 in the space of 60 seconds. Rachel Williams got them on the scoresheet on four minutes with a point. Soon after they would turn the ball over from a Wee County kick out that ended up with Eva Galvin grabbing a goal.

The home side tried to respond, a series of turnovers from Laois kick outs creating three chances in quick succession. However, their accuracy was a problem, Eimear Byrne twice missing the target from close range alongside an uncharacteristic wide from Kate Flood.

In this extremely short purple patch, lasting around two minutes early in the half, they even had a goal chance when Laura Collins tried to get her fist onto a high ball from the wing only to be denied by some good defending by Laois keeper Eimear Barry.

The visitors continued to frustrate the Girls in Red and while not capitalising on this dominance by opening up a clear gap, largely due to some poor shooting of their own (four in the first half alone), scores from Emma Lawlor, Aisling Donoher and Mo Nerney saw them take a 1-4 to 1-1 lead into the dressing rooms at half time.

In the second half, Louth came out with purpose, a greater intensity and work rate in their game seeing them get a lot more ball while also keeping their opponent’s attacking options limited. That didn’t stop Laois grabbing the opener, courtesy of Nerney on 36 minutes.

The introduction of Ciara Woods, Rebecca Carr and Michelle McMahon from the bench reignited the Wee County’s attacking flair. Woods was impressive in the corner, winning any ball that came near her while Carr was dominant in every aerial battle she contested.

Woods’ pace saw her duly win a foul in the corner, a score which was nicely slotted over by Flood to end a prolonged period without a score on 38 minutes. From the resulting kick out, Aoife Russell would gain possession and tee up Carr who from close range blasted it past Barry. Game on.

In between these scores came two more wides from Laois, who were now just a point in front. Opportunities to grab scores were rare, the Girls in Red now dictating the game despite the visitors having nearly as much possession as they had in the first half.

48 minutes into the contest Louth finally gained clarity on the scoreboard, a crossfield free was won brilliantly in the air by Carr, who was duly fouled. She calmly slotted over the free to the roars of the home crowd.

In the next play Jane Moore would be sent to the sin bin for a late challenge, with time running out the game looked to be in Louth’s hands. However just as the red wave was rising, another Laois goal sapped away all their momentum five minutes later.

Laura Marie Maher did very well to solo her way past two Louth defenders, before getting the ball into the hands of Mo Nerney whose strike created a three-point cushion once more. On a wet afternoon, a slip from Eilis Hand as she tried to track the run of Maher proved pivotal.

Despite the extra player, Louth struggled to create anything of note from here. They had the lion’s share of possession, but it was doing them no good as Laois kept them at arm’s length from this point until the final whistle to eke out a narrow win in this low scoring affair.

Next up for the Wee County is a date with Wicklow this Sunday, a rematch from their recent Division Three Relegation Final, won by Louth. They will need to show calmer heads when attacking if they are to grab the win away from home and keep their provincial aspirations intact.

Go ahead given for 108 bed nursing home in Omeath