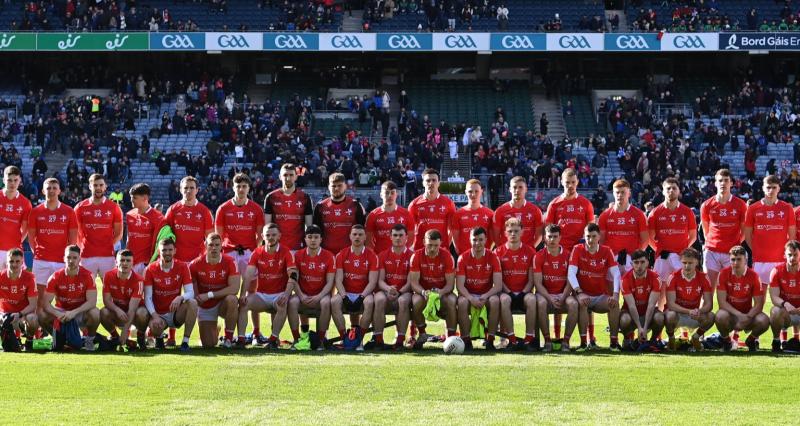 The Louth team prior to their Division Three Final clash with Limerick in Croke Park. (Pic: Sportsfile)

Some optimistic punters in Louth have backed the Wee County for Leinster glory this season ahead of their provincial opener against Carlow in Navan this weekend.

Mickey Harte’s side prepared for the Championship campaign by securing their second successive promotion in the National League, capped off by a Division Three final victory over Limerick at Croke Park.

Now some are investing in huge odds on Louth landing a rare Leinster title, which has now been cut into 50/1 by BoyleSports from the 100/1 available before the National League campaign.

A winning start against Carlow is also heavily expected at red-hot odds of 1/8, with Offaly (2/7) and Laois (2/5) also odds-on to start with victories over Wexford and Wicklow respectively.

Dublin remain odds-on favourites at 2/7 for a 12th consecutive Leinster championship, but that has been eased from 1/8 following their relegation from the top tier of the National League, while Dessie Farrell’s men are also trailing in the All-Ireland betting at 7/2 to Kerry’s 11/10.

Lawrence Lyons, spokesperson for BoyleSports said: “It’s no surprise that Dublin are hot favourites in Leinster, but their odds have still eased off significantly after the league campaign. Kildare are rated their main dangers, although some are hoping for a hefty payout if Louth pull off an upset and we’ve had to slash their odds given the potential liabilities.”