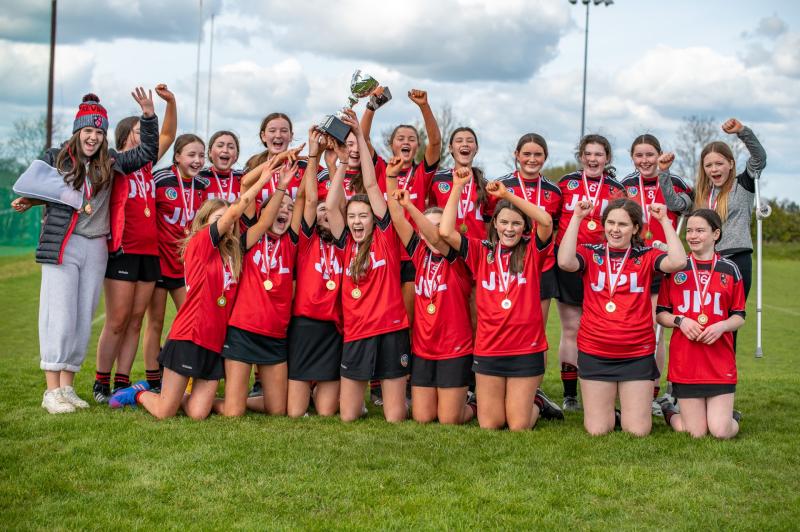 The St Kevin's team which won the 2022 Louth Camogie Feile

All teams faced each other in a five-round league, followed by a final.  The league table ended up with St Kevins in the final, but with two teams below them on on equal points.

And having drawn against each other, Mattock Rangers and the combination team were in a score difference tie for the last place in the final.  The combo team had a better score on the day, and so the final was contested between St Kevins and the St Brides, Blackrock and St Annes combination team.

There was an exciting final to follow, and it did not disappoint.  St Kevins deservingly came out winners on the day and went on to represent Louth in the Meath John West Feile in Dunganny on Easter Monday.

They would perform gallantly, losing to eventual Division Two winners Kildalkey before hammering Drumree in their second game.

The skill on show demonstrated how far Louth Camogie has come, and with all seven camogie clubs in the county represented at this level, the future looks bright for the game here.

All involved with the running of Feile were keen to thank their many great sponsors, whose contribution was vital to the event getting up and running.

“Thanks to your generosity the girls were taken care of for the day and went home with mementoes to remind themselves of the wonderful day” noted Louth Camogie in a statement sent to the Democrat.

“Thanks also to Warren Matthews photography for his wonderful coverage of the day and also the Darver Centre of excellence for the use of their facilities.”