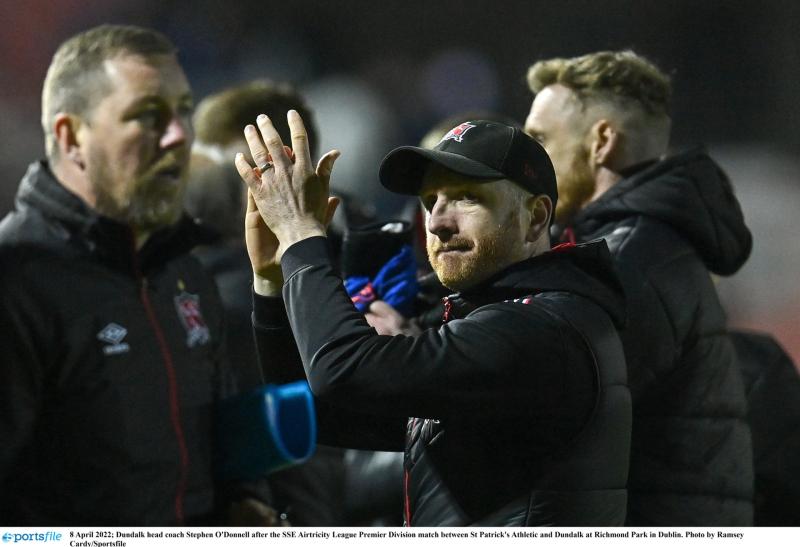 Stephen O’Donnell insisted there is no animosity between himself and the St Patrick’s Athletic playing staff following Dundalk FC’s scoreless draw at Richmond Park.

As expected, the Dundalk head coach was met with a hostile reception upon his arrival to Inchicore on Friday evening, having departed St Pats in acrimonious circumstances prior to joining The Lilywhites – less than two weeks after lifting the FAI Cup with The Saints.

The game itself didn’t come close to living up to any hype surrounding O’Donnell’s much-anticipated return to the Dublin 8 venue, with St Pats and Dundalk playing out a forgettable 0-0 draw which kept both teams in the top half of the SSE Airtricity League.

“St Pats had good moments, so they got behind their team, but there was nothing kind of untoward at all really. It was just a good atmosphere.”

The game marked the conclusion of the first round of fixtures in this season’s Premier Division, with Dundalk losing just one match, but drawing a total of six out of nine.

“I didn’t really have an expectation,” O’Donnell added when asked if objectives were being met. “It was just week-on-week. You can see in the league; everyone is capable of taking points off each other. That’s the league it’s going to be this season.

“There’s going to be three or four fixtures where you’ll have real trouble every week of saying with any sort of certainty: that’s going to be a home win or an away win.”

Devoid of attacking creativity on Friday night, Dundalk had Nathan Shepperd to thank for producing two fine saves in the second half to deny St Pats forward Eoin Doyle.

Shepperd’s saves ensured a fifth clean sheet of the season for himself and Dundalk – a feat that astonishingly took them 30 matches to achieve in the previous campaign.

O’Donnell’s side have not shipped a goal from open play in any of their last seven league outings, with penalties against Shelbourne and Drogheda United their only concessions.

“That’s a positive aspect, but when you limit teams to two goals in seven, you’d like to think you’ll have a number of victories in those seven matches. That’s a positive side of it, but we just need to get a little bit more cohesive and for our lads to realise what good players they are.

“Our first two games, we drew 2-2 and conceded four in the first two. People were probably going to say we were going to have a leaky defence. Obviously you don’t want to concede two goals in each of your first two games, but since then, we’ve been very good.

“It’s just about a balance. We want to be good in defence and scoring goals galore in attack, but we’ll get there and get a little bit more fluidity in our game. I’m just really enjoying working with them and we will improve as we go.”

Next on the agenda for Dundalk is fellow European hopefuls Sligo Rovers, who travel to Oriel Park this coming Friday night (kick-off, 7.45pm), before The Lilywhites face a trip to Tallaght Stadium to take on Shamrock Rovers on Easter Monday (kick-off, 7pm).

Sligo dropped two crucial points over the weekend in the race for European qualification as they had to battle back to claim a 2-2 draw at home against bottom-of-the-table UCD.

Dundalk and Sligo played out a 0-0 draw when they met at The Showgrounds earlier in the year, while The Bit O’Red were thumped 4-1 on their last visit to Oriel last September after the since departed Sean Murray, along with Patrick Hoban, each netted a brace.

Meanwhile Shamrock Rovers were pushed all the away in their Dublin Derby clash away to Shelbourne in Tolka Park. They needed a late strike from Aaron Greene to eke out a 2-1 win and a valuable three points.

Damien Duff will bring his side to Oriel Park Friday week, rounding up a tough Easter schedule for the Lilywhites with three games in eight days.

“We’re looking forward to them games, but we’ll dissect this game tonight and see where we can improve and we’ll look to sort of implement a game plan and look forward to the Sligo game next Friday.”

John Martin was involved in a light warm-up routine ahead of the draw with St Pats, while O’Donnell confirmed that John Mountney is also closer to a return to action.

“He won’t be long. He’s making good progress, so hopefully he’s back in the next couple of weeks. He’s back in training and taking full participation, so that will be a big boost also.”

Friday’s game between Dundalk and Sligo at Oriel is to be refereed by Neil Doyle and will be streamed live via the LOI TV online platform – with match passes costing €7 each.