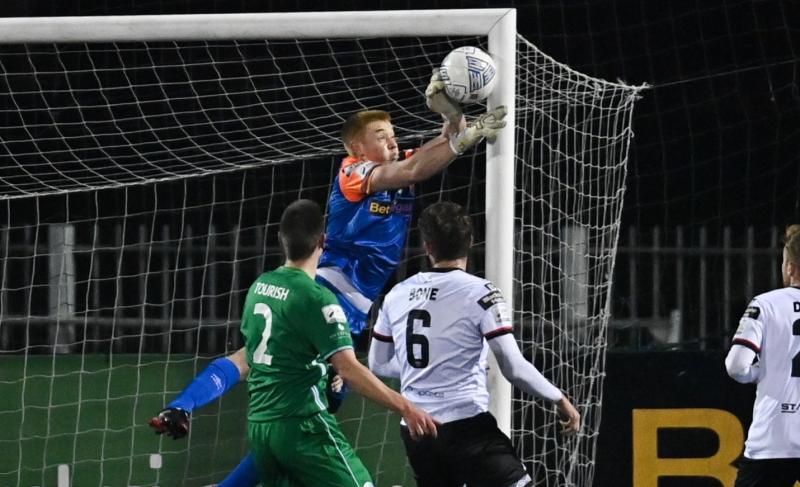 Dundalk goalkeeper Nathan Shepperd makes a save during the Premier Division match between Dundalk and Finn Harps. (Photo: Ramsey Cardy/Sportsfile)

The draw was Dundalk’s sixth out of nine games this season, and Shepperd is hopeful The Lilywhites can turn some of those stalemates into wins by adding more creativity to their game ahead of the commencement of the second round of league fixtures this week.

“A bit of mixed emotions,” stated the 21-year-old goalkeeper when asked for his reaction following the draw at Richmond Park. “We’re happy with the clean sheet again. Defensively, I thought we were pretty good, but just going forward, we need to create a bit more. We have mixed emotions, but we haven’t lost the game, so that’s positive.”

Indeed, Dundalk could very well have left Inchicore empty-handed if not for the interventions of Shepperd, who produced two remarkable saves to deny Eoin Doyle.

“Not too much (goes through your head). We all do it. They blocked shots for me tonight, the boys, throwing themselves on the line. I thought we defended pretty well apart from a couple of chances we gave up.

“We work for each other, all of us, running back and blocking shots – not even just the back four, everyone in the team. We do it for each other and it’s not just about me at the end of the day.”

The Welsh U21 international joined Dundalk on a permanent deal from English side Brentford, where he spent the entirety of his time with the London club in the reserves.

Dundalk’s new first-choice – who hails from the South Wales Valleys – has played every minute of League of Ireland action in what has been his first sample of senior football.

“It’s been a big adjustment to be fair. I’ve learnt so much so far in the first round of fixtures. In them nine games, everyone has been completely different. Each team has a different threat and stuff. It’s just adapting to that and then working out how we go about it. Hopefully now we can start winning games and kicking on.

“You play such a wide variety of teams (in reserve football) and it prepares you to a certain extent, but it can’t get you all the way there because there’s no league or anything, but this is proper and this is what a lot of young boys need and I’m just grateful for the opportunity.”

With the first round of fixtures now completed, the young keeper has only conceded six goals in nine matches – two of those passing him by coming from the penalty spot.

He’s also kept five clean sheets – an astonishing statistic when considered his predecessor, Alessio Abibi, only managed three in the entirety of the 2021 campaign.

However, with six draws and just two wins from their opening nine, Shepperd is hoping The Lilywhites can add more wins in the coming weeks and climb up the league table.

“I think we can really push on to be honest. There’s been a good couple of games where you think: if we had won them games, it wouldn’t have been unfair. If we have had three points, it puts us in a much better position in the league. We’ve done the first nine and it’s just about kicking on now and really pushing and taking the next step.”