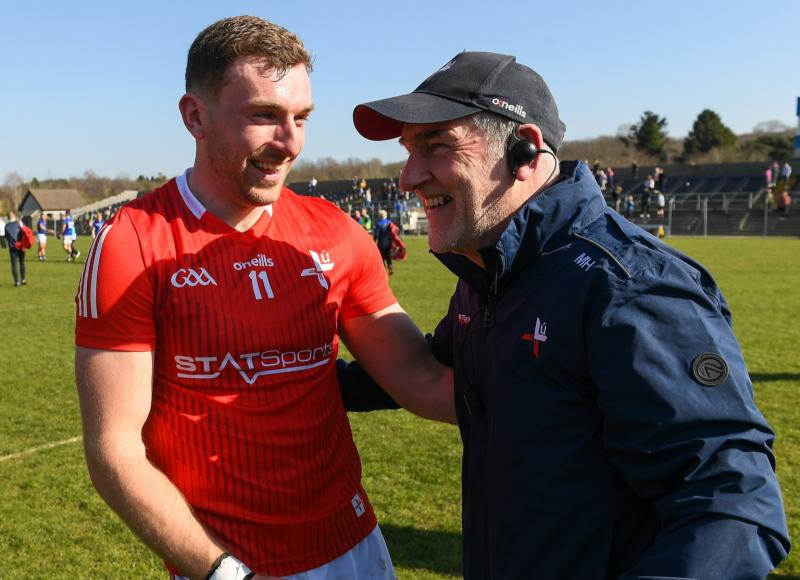 The Louth players triumphantly chanted “we are going up” in the away dressing room as supporters left a sun kissed Aughrim on the back of a fifth win in a row for Mickey Harte’s side.

A sixth game unbeaten, the momentum this side has built in the foundation of success this season has been truly remarkable. After the opening day defeat to Laois, who subsequently went down on the final day, who would have seen the remarkable turnaround coming?

So with that helter-skelter nature of Division three in the back of Louth players minds, focus and pressure was felt on the double as they set out about their work.

The win made certain of promotion and a league final this Saturday against Limerick in Croke Park but it was hard earned against a spirited Wicklow outfit who lost Louth native Colin Kelly as manager mid-season. Louth had to shake off the flatness of the coronation and simply get the job done.

On the day, Ciarán Downey was highly impressive with 1-4 in the opening half. The crafty Blues man was too sharp for his marker Tom Moran and licked him for three points in the opening five minutes of action.

Daire Nally came into the team for Ryan Burns in the sole change from last week’s significant win over Antrim and the Blues didn’t disappoint. Nally found his club mate on numerous occasions in that early part of the game.

Downey’s advancement is a sign of Louth’s fluidity this season. Downey was key to Louth’s turnaround on the wing and then when asked to play a different role in recent weeks he has come up trumps in finishing the moves rather than beginning them.

Veteran Mark Kenny was using all his experience at the other end to keep Wicklow in touch and Patrick O’Keane levelled the game as Louth supporters' minds began to wander and see how Limerick were doing against Fermanagh.

By the 19th minute, it got worse for those second screeners as passive Louth messed up goal chances and Kenny gave Wicklow the lead in the game for the first time. Sam Mulroy responded but Eoin Darcy then introduced himself with a free to keep Wicklow ahead.

Then came Downey’s all-important goal. A lovely dummy run out the left wing gave him the space where he wanted it played. Liam Jackson read the play beautifully and instinctually. And he so much in sync with Downey that he played the assist with his left hand and Downey ran on and finished with aplomb.

A further extension of where Louth have come as a team. Downey, remember, missed key chances against Laois on that dreadful opening day. The goal allowed Louth to breathe.

However, the lead did come with a warning. James Califf had to bravely deny Oisin Cullen a certain goal and in doing so, became a huge doubt ahead of not only this Sunday’s final but Louth’s championship campaign. A major blot and talking point on the day.

There was further twist at the tail end of the half when Wicklow midfielder JP Hurley picked up a black card just at the stroke of half time with Louth leading 1-6 to 0-7.

With the lead, Mulroy, forever guiding his side, did so again in the third quarter with defiant placed balls as Wicklow still proved to be pesky hosts.

Despite being relegated, Alan Costello and Gary Duffy’s side did not give an inch on home turf and with the pressure all on Louth, Harte had to refocus his side at half time and it was apparent thereafter. Louth looked more focused but still found it hard to break Wicklow down.

Ironically, Louth pushed on after Hurley returned to the action. Exhausted perhaps at keeping Louth at bay, Mulroy landed three points in a four in a row run. Liam Jackson with the other. That stretched Louth into a six-point lead, 1-12 to 0-9.

Just when it looked like a procession however, Wicklow took a quick free and awakened Louth when Kevin Quinn found the net. The goal acted as a stimulant for Louth with Tommy Durnin responding to land his second point of the half.

The score was one of real leadership and also a signal that Louth were playing within themselves and could lift it when they truly wanted to. Mulroy replied twice from mammoth placed balls.

With Wicklow chasing and going all in on attacks, they left themselves vulnerable on the counter. Louth’s identity this season under Harte, if anything is that rapid change from attack to defence and hard running.

So there was no surprise when Louth’s bench provided a punch. The return of Eoghan Callaghan to the scene and Ciarán Byrne’s sheer energy was a delight, but Tom Jackson’s goal sealed the game.

Cue the gentle invasion of Louth supporters at the final whistle to the centre of the pitch and the echoes of “Wee are going up” that will last a lifetime.