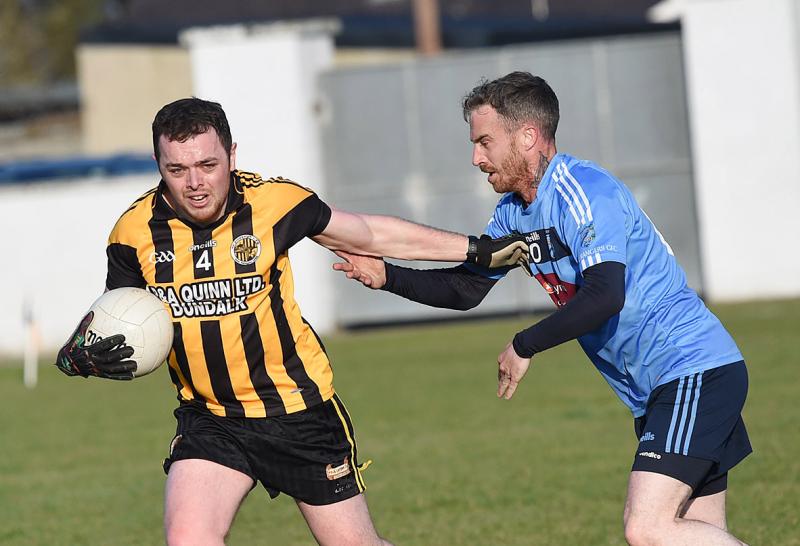 Na Piarsaigh remain on course to retain the Kevin Mullen Shield after claiming a dramatic win over Glyde Rangers in Saturday evening’s semi-final.

The fine conditions helped the teams serve up an entertaining encounter and after finishing level at the end of normal time, they couldn’t be separated after extra time. As a result, the tie was decided by a penalty shoot-out where the Dundalk side prevailed on a 4-2 scoreline.

The game began with the Tallanstown side having the better of things and with Brian Duffy and Trevor O’Brien among the scores, they had built up a 0-11 to 0-6 advantage.

They were unable to maintain that momentum in the second half as Na Piarsaigh battled their way back into contention with goals from Micheal Begley and Daniel Kerr. At the other end, Oisin Lynch found the back of the net to ensure the sides finished level at 2-11 to 1-14.

Glyde added five points in extra-time but it wasn’t enough to claim the victory as a goal from Daniel Kerr ensured the game finished in a draw. That meant the tie had to be determined with penalties and it was Na Piarsaigh who stood up to the pressure as they came out on top.

Glen Emmets set up a meeting with Na Piarsaigh in the Kevin Mullen Shield Final after sweeping aside the challenge of Lannleire in Cusack Park on Saturday evening.

The Tullyallen side were in stunning form and rattled in five goals with Robbie Byrne, Kealan O’Neill, Damien Grimes and James Butler hitting the net.

It was O’Neill who scored the first goal of the game to give his side the early advantage and although Lannleire enjoyed a good share of possession they were unable to make it count on the scoreboard.

A point from Colin Murphy was their only reward as they kicked six wides and missed a good goal opportunity, with the Emmets going in at the break leading by 1-3 to 0-1.

The hosts upped the pace in the second half and the Dunleer side had no answer as O’Neill, Butler, Byrne and Grimes rattled in the goals to seal a very comfortable win which provides an opportunity to avenge last year’s Shield Final defeat against Na Piarsaigh.