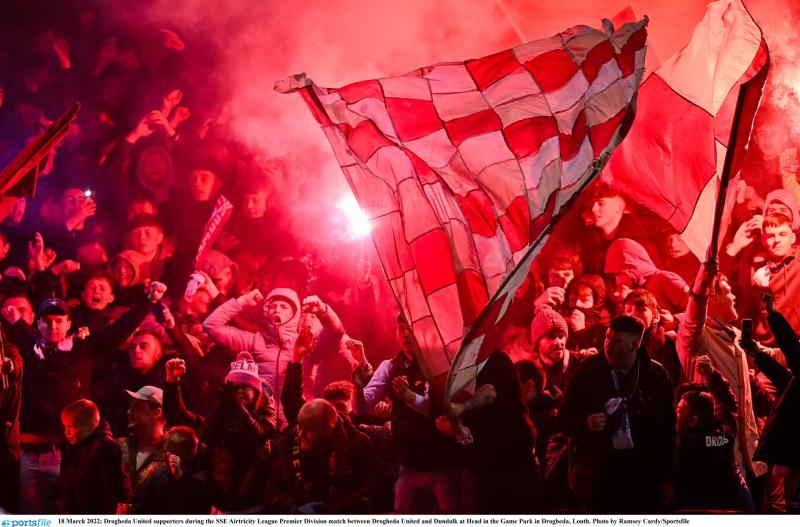 Flares being lit during the Louth Derby, one part of the hooligan football culture that has crept more and more into the League Of Ireland. (Pic: Sportsfile)

Last Friday night in Drogheda was most disappointing when one witnessed crowd trouble in the ground itself. Soccer Hooliganism was something I thought had vanished deep into the past. I have rarely seen it inside a ground in modern times.

But it’s a factor that has been bubbling away underneath ever since crowds returned from the Covid pandemic. Last season fireworks of some sort were fired across at some Waterford supporters by a small group claiming to be Shamrock supporters at the RSC ground.

Rovers were ordered to play their opening home League game of this season behind closed doors. But the FAI reneged on their decision following appeals by Shamrock Rovers and ordered the game could be played in front of supporters.

Instead, the club were fined around €6,000. With a crowd of over 7,000 at the game, Rovers easily paid that fine which was minuscule in comparison in what they made at the game.

A report in the Derry Journal following the Shamrock Rovers vs Derry game at the Brandywell two weeks ago painted a bleak picture of the trouble caused by Rovers fans. One person spoke of the horrific experience he went through during the game.

Some Dundalk supporters are not without guilt either. They have consistently lit flares and fireworks both in Oriel and at away venues as well. Last season it was so bad that RTE camera crews told me they would not be returning to Oriel until the flare and firework problem was sorted.

Dundalk’s last home game against Shamrock Rovers had restored my faith in football. Home supporters followed the club’s request before the game that no such flares or fireworks be lit. The club warned such a practice could lead to serious injury or even a fatality.

They also warned the club could be banned from playing games at Oriel and heavily fined. The warning also mentioned the flares could explode prematurely and also cause serious smoke inhalation.

It was a huge success at Oriel, as no flares or fireworks were lit by Dundalk or Rovers fans. There was no trouble either before, during or after the game.

Move forward to Friday night at United Park. Drogheda fans openly lit their flares with the resulting smoke and danger to health and safety. Dundalk fans on the opposite side resumed their flare and firework lighting as well.

The game was held up for a few minutes at the start of the game as smoke billowed across the pitch.
The game did continue but flare and firework lighting continued sporadically throughout the game among both sets of supporters.

But a new and frightening development happened at the end of the game. A group of supporters from where Drogheda fans were based invaded the pitch. They ran across the pitch and began throwing missiles into the stand where Dundalk fans were situated.

Reports in the national media on Saturday said some Dundalk fans ended up on the pitch clashing with a small number of Drogheda fans on the pitch. All of this has to be utterly condemned.

Responding to the violence at United Park, Dundalk released a strong statement of condemnation. The club said that they were extremely disappointed to learn that five year old Zoe Murphy was singled out by an individual supporter for abuse before Friday night’s game.

To me this is shocking that this poor child was singled out for horrific verbal abuse like this. It’s to the club’s credit that they were quick to condemn the verbal abuse of a disabled Dundalk child. The abuse came from a person who was there to support Dundalk.

Zoe is a young child who was born with quadriplegia and developed Cerebral Palsy at 21 months. Zoe’s parents were told that she faced a lifetime of being wheelchair bound for the rest of her life.

After a huge fundraising effort over €100,000 euro was raised for Zoe to have surgery in the United States. The outcome of surgery brought good news for Zoe and her family and she continues to recover and improve each day.

Dundalk say that everyone at the club are working to ensure there is a family friendly and inclusive environment at the club. They also take all forms of discriminatory abuse seriously and won’t stand for that type of behaviour.

The person involved contacted the club and the Murphy family. The person apologized unreservedly for his actions. Dundalk FC Chief Operating Officer Martin Connolly says that having spoken to The individual concerned, both the club and Zoe’s family believe the apology Is genuine and the incident out of character.

Mr Connolly says the individual agreed with him that he will work with the club and educate himself about Zoe’s condition, Cerebral Palsy, and those with similar disabilities. Martin said that the club look forward to Zoe leading the team out for the game against UCD on 1st April.

The club say they are now facing a substantial fine by the FAI. Dundalk FC say where identified they will support and impose the strongest possible sanctions against those so-called supporters.

Martin Connolly says that supporters have a right to attend matches without running the risk of abuse or serious injury from smoke bombs or flares.

He added it was regrettable the incidents overshadowed another wonderful turnout and display of support at Head in The Game Park in Drogheda.

In fairness to Drogheda United their security people moved in very quickly with Gardai as soon as it had begun. The incident was over within a minute or two. But Drogheda United have questions to answer over how easily their fans got over to the Dundalk fans. And so quickly too.

While the authorities at United Park must be commended for how they dealt with the problem as it happened, It should never have occurred. I have been going to local derbies between Dundalk and Drogheda at United Park for years.

I have never ever witnessed one set of supporters invade the pitch and get so close to the opposing supporters in this ground, let alone attack them with missiles. Sadly some Dundalk fans responded disgracefully by engaging in a brawl on the pitch.

Shades of a Scary Past

I witnessed the soccer hooliganism of the 70’s and 80’s. Of course, it has been there right up to today, but not to the extent where opposing fans clashed inside a ground. That was in a bygone era.

I remember when Dundalk and Limerick were the top teams in the late 70’s early 80’s. Limerick and Dundalk fans clashed in the Market’s field in one game in 1980. That game stood out as Limerick fans threw snooker balls at the Dundalk fans. The Limerick fans also attacked Dundalk fans as they made their way back to the train station.

I remember the FAI Cup final of 1987 between Dundalk and Shamrock Rovers. This game was marred by terrible crowd trouble. Rovers had just had their home ground at Milltown sold off for houses.

A group called KRAM, meaning Keep Rovers at Milltown, protested on the pitch at Dalymount Park at half time. As far as I can recall missiles were thrown by some Dundalk fans at the Rovers group.

Missiles were thrown back into the Dundalk fans who were on the terraces. All hell broke loose. I always remember seeing two kids, no more than 11 or 12, getting struck with bottles by Rovers fans.

I spoke to the kids’ father. They were from Ardee. They were taken to hospital, as were others. There was a terrible panic. I left the ground just before the game restarted. It was too dangerous to stay.

Rovers won the cup. That was 1987. They didn’t win it again until 2019 when they won it on penalties, ironically against Dundalk. The fault of the Dalymount riots lies with the hooligans.

Just as we had hooligans then, we have them today. They must not be allowed to hijack the game from us, the supporters. Every club has its potential hooligan element. These must be got rid of by clubs by being people being permanently excluded.

Soccer games are very much a family friendly affair. It’s great to see mothers and fathers with their children enjoying the games since the return of fans from Covid. The hooligans are lurking in the shadows at the moment. Thats where they must be kept.

Security at Oriel has always been top class. And that’s to the great credit of the staff there. All clubs must use their intelligence information to erase any possibility of this cancer ever taking hold of our game again.