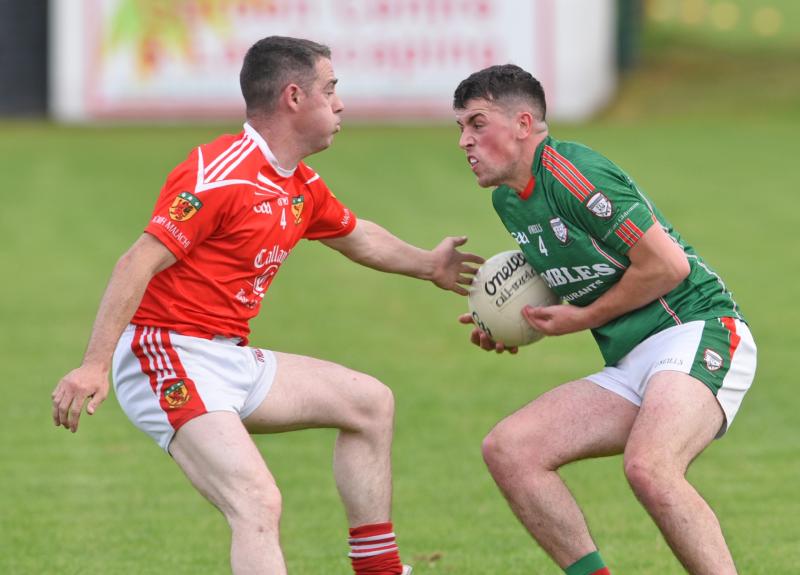 In a repeat of last year's Louth Junior Final, the result was the same with Glen Emmets beating John Mitchels in a disappointingly one-sided affair in Tullyallen.

James Butler, the player who missed that final through suspension will get all the plaudits with an eye-catching tally of 3-7 in the quarter final victory.

At half time the game was all but over as the hosts led 3-14 to 0-1, new addition Jake Gillespie found the net for Mitchels in the second half as Emmets ran rampant with four more goals.

Na Piarsaigh maintained their hopes of successfully defending their Kevin Mullen Shield title when they proved too strong for Annaghminnon Rovers at the Rock Road on Sunday afternoon.

Goals proved crucial in this game and it was the Dundalk men who came out on top as Fionn Tipping, Thomas Muckian, Mark O’Hare and Conall Shields all raised the green flag.

Rovers competed well in the first half and had four points on the board, but crucially Na Piarsaigh got the first goal of the game through O’Hare to give the hosts a 1-5 to 0-4 advantage at the break.

Na Piarsaigh then upped the pace after the restart and made sure of a deserved victory as they added three goals to their tally.

Glyde Rangers secured a place in the semi-finals of the Kevin Mullen Shield thanks to a last gasp winner at Tallanstown on Sunday afternoon.

Trevor O’Brien’s sixth point of the afternoon was enough to hold off a spirited challenge from the Wolfe Tones who will be disappointing to have lost out after an impressive second half revival.

The hosts were on top in the first half and landed a number of well-taken scores to build up a 0-9 to 0-3 lead at the break, with Jordan Duffy and Niall Smith on target for the Tones.

The visitors responded very well in the second half with Patrick Fanning impressing off the bench. Points from Stephen Murray Kierans, Niall Smith and Jordan Duffy narrowed the home sides advantage.

A goal from Smith was followed by an equalising point from Emmet Judge, but Glyde responded to the challenge by snatching victory in the dying seconds with O’Brien’s dramatic late score.

Moving up the gears in the early stages, Dunleer opened up a healthy 1-10 to 0-2 lead at half time with Bob Murphy moving well at full forward with the first of his two goals.

Padraig Moley found the net for the hosts and they were much more competitive in the second period. Murphy added to his tally and substitute Lawrence Carroll Jones found the net off the bench for Glen O’Reilly’s side as they advanced to the semi-finals.