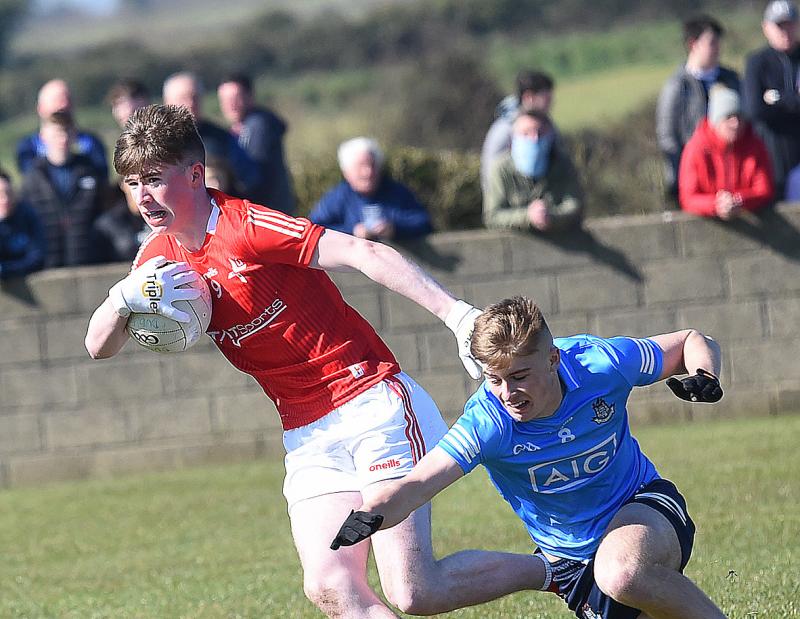 It was a tough day for any Louth person on Saturday afternoon, not least the minor footballers that had to endure a chastening afternoon in the heart of mid Louth to a ruthless Dublin outfit.

Pumping noise before and after the game, with a backroom team in the high teens Dublin rolled into the opening round of the Leinster minor championship with a focused demeanour and tags still on their new and top of the range gear.

How good of a crop of talent they really are will be decided in the coming weeks, but on Saturday Louth were no match and simply outplayed across the board.

Conditions were, as usual, perfect under foot but the wind caused havoc with players' decision making and Dublin had the better skillset to manipulate it to their advantage.

Louth struggled in getting any possession whatsoever and Dublin were dominant in all areas. An early goal for Dublin sapped the young reds of much needed confidence and only for some wayward shooting from Dave Reynold's side they would have been further ahead on the scoreboard.

A final quarter shootout will boost Aaron Hoey in terms of looking for areas to build upon. The young Dubs went a quarter of an hour without registering a score yet when it came time, David Mulqueen wrapped up the day with his second goal.

That did not help the optics, but the scoreboard didn’t lie despite the slowing of the scoring rate on the Dublin side of things. Louth have plenty to work on, building morale backup will be the first thing and instilling confidence will be the next thing on the list.

Tadhg McDonnell did provide Louth with a bright start after working the ball up the field against the wind. The Ardee youngster stroked over the free on the manicured Stabannon pitch before the Dublin onslaught was about to begin.

The surge came in the sixth minute. With the wind swirling, Louth goalkeeper Fionn McQuillan failed to deal with a high ball. An indecisive punch through a mass of bodies broke tamely to Conal Ó’Riain. The Kilmacud man was left with the simplest of tap ins.

Dublin then rattled off the next seven scores, Ciaran Donovan at full forward was a real handful, Joe Quigley impressed in the corner while Ó’Riain continued to add to his tally and budding reputation.

Nine first half wides from the visitors was the sort of wastefulness Louth could only dream of. Against the wind, kick passing went astray and Jack Neilon to his credit was trying manfully at centre half.

Another Ardee youngster, Adam Gillespie, forced a good save out of David Leonard in the road end of Stabannon and off that, Dublin counter-attacked with venom to find the back of the net. Quigley, the man with the rasping finish to make it 2-7 to 0-1 at the interval.

The second half was played in the same vein. Except Dublin amassed their first half tally in less time, after fifteen minutes to be exact.

David Mulqueen got the first of two second half goals when he dispossessed McQuillan in the Louth net and saw the loose ball trickle over the line. Substitute Clyde Burke with a devastating finish for Dublin’s fourth goal.

To nobody’s surprise, Dublin’s replacements were impactful, none more so than Burke, Dublin’s joint captain. Hoey brought in some fresh legs also, with James McGlew and James Maguire introduced.

Dublin then became disjointed, and Donovan added to his wide tally and Louth grew in the final quarter buoyed by an Adam Gillespie goal. A turnover in the Dublin defence sent him away. With Dylan Shevlin on the outside, Gillespie went for it himself and he was right to back himself.

Mulqueen with the fifth in additional time was a nasty tack at the end of a drubbing. Louth will now try to lift themselves for a trip to the midlands against Westmeath in a fortnight's time.