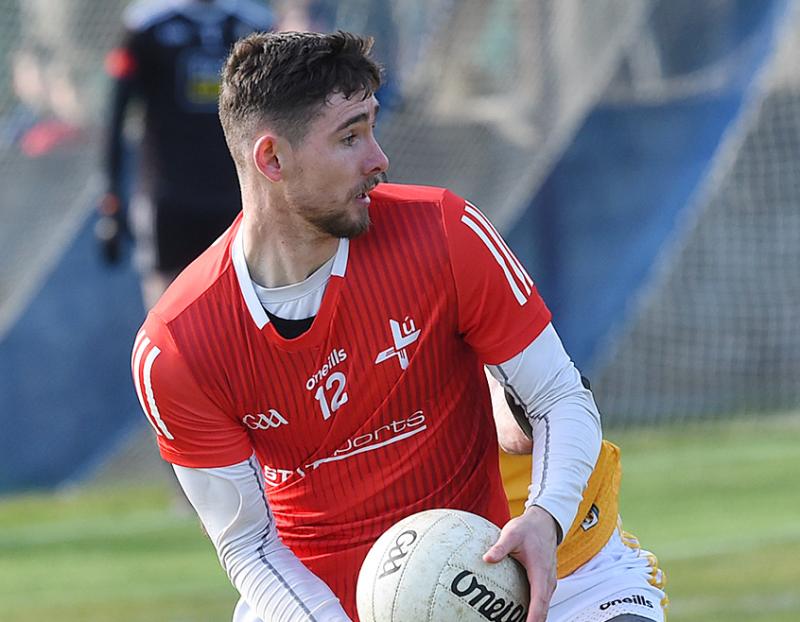 Louth's Ciaran Downey on the ball during his side's clash with Antrim in Ardee. (Photo: Arthur Kinahan)

Louth are on the cusp of promotion to Division Two following a convincing win over a lack lustre Antrim in Ardee.

The Wee County were on top for the majority of the contest, keeping the Saffrons quiet for a large chunk of the first half while building up a five point cushion at one stage.

A Dermot McAleese goal on 51 minutes threw a spanner into the works, but the Men in Red dug deep and a Sam Mulroy goal on 64 minutes negated the Antrim three pointer. Under pressure late on, Louth wouldn’t buckle as they made it four wins in a row in the National League.

On nine points now, they are agonisingly close to return to Division Two for the first time since 2018, with just Wicklow away to play in the final round of fixtures.

With the breeze backing them up it was the home side who started the brighter and they could have had two goals inside the opening three minutes.

A long ball into the full forward line by Conal McKeever was let bounce around the square before coming off the upright, this allowed Sam Mulroy the opportunity to grab possession. Sadly the Louth captain failed to hit the target as he tried to fist the rebound into the net.

They regained possession from the resulting kick out, Mulroy again managing to win the ball. This time he was swamped by three defenders and couldn’t get his shot off.

The pressure put on him saw many fans in the crowd calling for a penalty, but these calls were shrugged off by referee Patrick Maguire.

It was Antrim that got the scoring under way, a shot from range by Ryan Murray dropped short but was parried over the bar by Louth netminder James Califf.

The Wee County continued to turn the screw, a mix of speedy solo runs and some superb direct ball quickly turned defence into attack and The Saffrons were struggling to keep the home team at bay.

Daire McConnon got Louth’s opener as he finished off a lovely team move involving Craig Lennon and Conal McKeever on seven minutes, while further scores followed from Tommy Durnin and Sam Mulroy to go 0-3 to 0-1 in front.

The visitors bounced back with two rapid fire scores, but their attack began to rely heavily on forcing fouls. Points in this fashion from Conor Murray and Ruari McCann followed to level proceedings.

Their attacking options dried up from here with Antrim going close to 20 minutes without a score. In this period, they had to endure endless waves of attack. McConnon and Mulroy were the main targets, both forwards mixing it up as Louth’s man on the edge of the square.

The first of four in a row came from the boot of McConnon, who did well to win a mark which he duly tapped over in the corner. A great solo run from Donal McKenny won a close range free, calmly slotted over by Mulroy who finished the day with 1-9 to his name.

Downey launched another ball into the forwards, again won masterfully in the air by the Louth captain. He duly soloed back into space and pointed while a further 45 from the sharpshooter had The Wee County 0-7 to 0-3 up after 26 minutes.

Antrim were getting the odd chance, mainly from frees, but unlike Louth who in Mulroy they could rely on to slot over from any angle, given his current form, Ruari McCann was struggling to find his range and missed chances to narrow the gap.

After switching Ryan Murray to the place-kicking duties, the Saffrons got one more score just before half time to leave the gap at 0-7 to 0-4. Louth looking very comfortable against an Antrim side that didn’t look at races for large periods.

Mickey Harte’s troops didn’t hold anything back on the resumption, their relentless work rate on and off the ball seeing them force five fouls in the Antrim half in the opening 10 minutes. But on the scoreboard, only a score apiece was registered via Mulroy and Tomas McCann.

The visitors attack had more bite in it now. They were moving the ball quicker and the long ball, aided by the stiff breeze was now a weapon they could utilise. Yet it was the men in Red who ended up increasing their lead via two frees from Mulroy.

Defending a lead has been something The Wee County has improved on throughout the league campaign and up by five with 20 minutes to play the hope was they could show those skills once more. However, a goal from Antrim brought them back into contention on 51 minutes.

Conor Murray floated a ball in from the sideline towards the square which was fisted home by the inrushing Dermot McAleese. Game well and truly on.

Again, the sides traded scores this time from Mulroy and Ryan Murray, with the tension among the vocal home crowd starting to mount. Could all the hard work of the first half be in vain? Had Louth kissed promotion goodbye?

When needed Harte’s big guns showed their worth with a vital goal of their own on 64 minutes, seconds after Antrim had narrowed the gap to just a point.

A quickly taken kick out was won around the middle by Conal McKeever, who in turn launched the ball into the corner for substitute Casey Byrne. He soloed past his marker along the endline before teeing up Mulroy who fisted it home to dubious scenes around the ground.

Antrim pushed on in the hope of getting a second goal to reignite their challenge, however Louth were astute defensively. Bevan Duffy and Tommy Durnin both won high balls late on near their own goal, again to big roars as Louth secured a vital win in their fight for promotion.