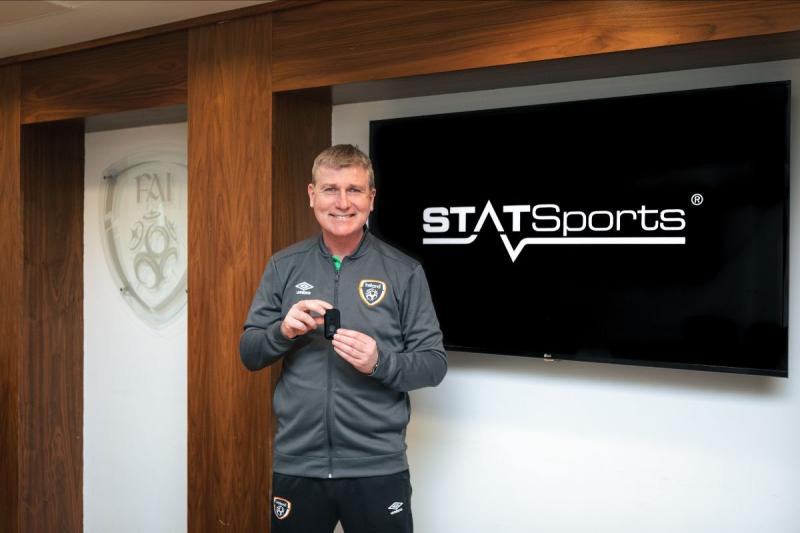 Not content with having their brand associated with Dundalk FC, Louth GAA along with many sports stars and clubs in the Prmier League, the locally owned sports data company STATSports have been announced as an official partner of the FAI.

Today, the world’s leading GPS performance tracking company, STATSports, have come on board as The official GPS player tracking system of the Republic of Ireland International teams.

For nearly a decade, the FAI have trusted STATSports wearable technology to maintain and develop the physical performance of their players.

STATSports, which tracks performance data through the black pod placed in the players performance vest/bra, will be used across U17, U19, U21, senior men’s and senior women’s teams.

"I think we have been using STATSports since I was the U21 manager" stated the Irish Senior team manager Stephen Kenny in a video released on the FAI social media channels.

"We've been using it over the last number of years and it is a brilliant tool for us and really helps us in so many areas. It measures the training loads so that they peak on match day, that they are at their optimum level and that is a great tool to have. We are delighted to have it."

STATSports also hope to bring this technology all the way down to the grassroots of the game through this partnership and will run educational events to engage with local coaches across the country.

This prospect was something that excited FAI CEO Jonathan Hill, who was delighted to see them come on board, feeling their input would be vital improving the standard of football at both the top and the bottom of the sport.

"To be able to educate coaches around the country through the partnership is really important to us" confirmed Hill in a statement released this morning.

"Helping trainers understand how they can monitor and improve players physical capabilities from a young age will be crucial for their development.

“From an elite perspective, the physicality of the modern game is growing more intense every season, its vital players can meet that standard and STATSports is an integral tool in conditioning and educating the players on these demands.”

The world’s best players use STATSports including Ronaldo, Messi and Mbappe, as well as investors Kane, Sterling, Maguire, Foden and Oxlade-Chamberlain.

Based out of Newry, they operate in a number of other sports including some of the biggest sporting names in the world, such as The All Blacks, India Cricket and the New York Yankees.

Co-founder and current part owner of Dundalk FC, Sean O'Connor has welcomed this latest partnership. He feels strongly their equipment will become as vital to the game as shinguards and boots.

“We’re delighted to extend our partnership with the Football Association of Ireland, who have been long-standing clients of STATSports" exclaimed the chairmen of Dundalk.

“To be able to support grassroots football in this country is something we’ve always wanted to do, and to have the support of the national team will massively benefit the football community.

“Our technology is as essential as shinguards and boots in today’s game, and through our educational events we’ll be able to provide coaches with new training techniques and equipment, that will help young aspiring players reach the top of their game.”

PICTURES: Have a look inside Louth's most expensive property