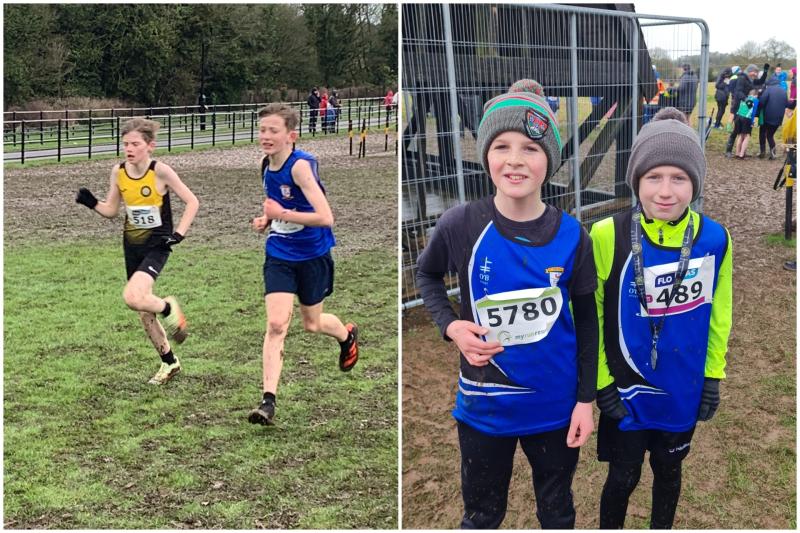 The curtain came down on the local Cross-Country season until the Autumn and the St Peter’s AC athletes will probably never experience worse conditions to run in as they did in Oldbridge at the 2022 edition of Rás na hÉireann.

However, the conditions didn’t deter the enthusiastic bunch. First up was Colm Duff who suffered a fall early on but recovered well to finish very strongly. The girls under 11 race had Sabina Zenderowska compete along with a large field of athletes and although Sabina would much prefer the track she really gave her all and did well.

The St Peter’s club had three girls in the under 13 race with Niamh Allen leading the club charge closely followed by Sadbh Logan, making her Cross Country debut, and Tatiana Zenderowska. All three girls coped with the wind and rain and gained vital experience from the race.

The under 13 boys race was again a very keenly contested affair, which really tested the young athletes reserve. The blue singlet of Dromiskin had two athletes in the business end of the race with Ross Hillen holding on to take the last of podium places in sixth place and Conor Duff, who was out of age, narrowly missing out.

Laura Duff ran her first Cross Country race of the year and she could hardly have picked a harsher day to start back, however this girl is made of tough stuff and gave her all in the girls U15 race.

The multi-talented sports man that is Donnacha Reidy moved up in age to battle it out in the boys U15 race, Donnacha put himself in the mix in the leading pack from the start and although the pack changed a few times throughout the race Donnacha hung on and managed to take the last of the podium places.

The last athlete in action at the Rás for St Peter’s was Dearbhla Allen who was running in her second Cross Country race in four days and coincidentally both were in terrible conditions.

Due to the deteriorating weather the under seventeen boys and girls races ran together, however that didn’t bother Dearbhla and she gave her all.

Allen, who is still under sixteen, found the two races to be extremely tough given the wet conditions in both and was pleased to see the finish line and take her place on the podium in second place and collect the silver medal.

On Wednesday February 16 the club had three athletes compete at the Leinster schools Cross Country. Dearbhla Allen again had a super performance running really strongly from the start and finishing in second place in the girls junior race, thusly qualifying for the All Ireland Schools next month.

Niamh Brady also qualified for the All Ireland schools with a really strong run and a seventh place finish in the girls senior race.

Rory McLoughlin, having had a great North Leinster Schools Cross Country race, missed out on the top fifteen in the Leinster senior race so will now concentrate on his much preferred indoor season.

The club also had two athletes in action at the NIA Live meeting in Abbotstown on Wednesday. Sean Allen made his return to the track running in a 400M race and took the honours in a time of 55.51.

Cian Gorham moved up from his favourite 800M event to run in the men’s 1500M which was a very high standard.  He gave his all and didn’t look out of place alongside some elite competition.

The previous weekend the ever-willing Tom McGrane travelled to Glasgow to compete at the Scottish master indoor track & field championship. Tom threw a season best of 9.18 to take the silver medal in the M55 category.