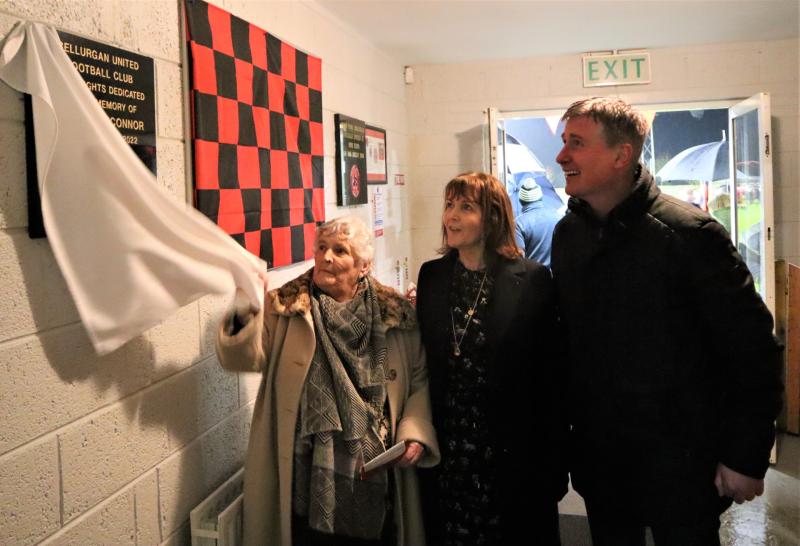 Saturday the 19th of Feb saw the official switching on of the new Floodlights at Bellurgan United.

A series of events were scheduled for the evening, including the switching on ceremony, an exhibition match under the lights between a Bellurgan United XI versus a Sean O'Connor XI and a Player of the Year award ceremony for last season.

The big switch for the lights was thrown by three generations of the O'Connor family as the floodlights are dedicated to the memory of Bellurgan Club stalwart Michael O'Connor. The honour went to Betty, Rosaleen and Penny O'Connor (Michael's mother, wife and granddaughter).

Before the big switch was activated Club Chairman Collie Woods made a short speech giving the background to the night and thanking all the many people who helped in the Floodlight project. This was followed by a short speech by special guest Ireland National Team Manager Stephen Kenny.

Stephen reflected on the obvious community feel to the club and its volunteers while also referencing the top-class facilities of Flynn Park and the excellent position the club is in both on and off the pitch.

Once the lights were switched on the exhibition game got underway. While the football on the pitch developed, events moved indoors to the clubhouse where Betty and Rosaleen O'Connor along with Stephen Kenny unveiled a plaque dedicated to Michael's memory.

This was followed by a Player of the Year Awards ceremony with all of the awards presented to each young player by Stephen Kenny. Complimentary hot drinks were served to keep the large crowd warm along with delicious hot food.

Once the football finished, events moved to Fergusons Bar in Glyes Quay for a social evening and a fundraising raffle draw.

“We would like to thank Stephen Kenny for coming out in such inclement conditions and being so generous with his time in participating in the events and also signing so many autographs on the night and stopping for photographs” stated a spokesperson for the club.

“The club would like to thank everyone who attended on the night, the volunteers who prepared the night and especially the O'Connor Family for being our special guests.”