Inside Track: Soccer could be coming back to Croker in six years’ time 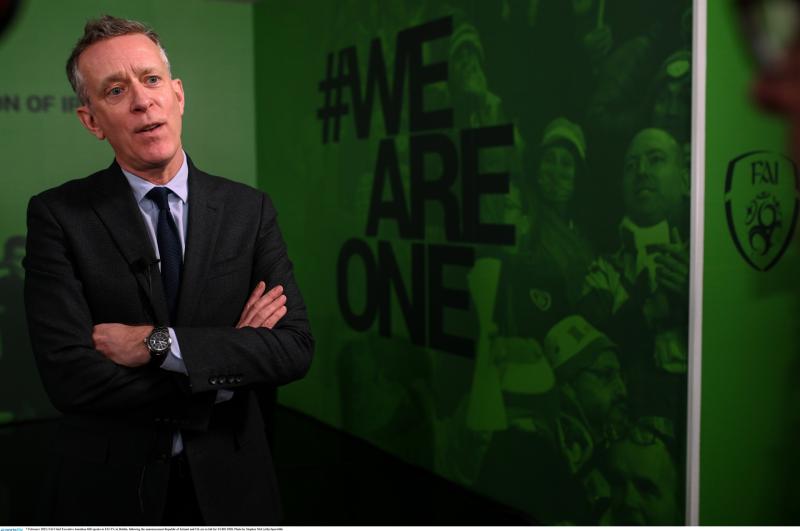 In making a joint bid to host Euro 2028, Britain’s three associations along with the two on this island are obviously singing from the same hymn sheet, on good terms with each other. It might not always have been like that.

The Aviva and Croke Park are being suggested as venues for games to be staged here. By then the GAA should have its finances back in order - assuming Covid, in all its forms, is only a memory, and, hopefully, a distant one at that.

And if it does happen, no-one will be able to accuse Croke Park of doing it solely for the money, as was suggested when the gates were previously thrown open for rugby and soccer.

When next there was an issue over a GAA pitch being used for what was known in the days of the infamous Ban as a ‘foreign game’, finance wasn’t a factor.

With the finger being unfairly pointed at the Cork County Board when the use of Pairc Ui Chaoimh for a testimonial for the late Liam Millar was being debated, many with no idea of the GAA’s workings throwing in their oar, the GAA’s Central Council, the sole arbitrators, had no hesitation in making the Cork stadium available for what proved to be a very successful occasion.

Would it have been possible to find unanimity among the five associations had a major tournament been open to bids, as it is now, back in the mid-1990s? Maybe and maybe not.

This was a time when venom seeped from the Windsor Park stands and terraces on the night of a crucial World Cup qualifier, with some of those on the park doing nothing to quell it – maybe even encouraging it. And a couple years later, yobs came over from England to engage in a riot at Lansdowne Road.

The Republic of Ireland’s match with England was a friendly, going ahead at Lansdowne, 27 years ago last week. Big Jack Charlton was in charge of the home team, and Terry Venables, having recently taken over from Graham Taylor was calling the shots for England.

Maybe it was because Ireland, ahead through a David Kelly goal, were playing the opposition off the field that the English contingent in the West Stand decided action was needed. They began to rip out the wooden seats and throw them onto the field, causing the referee to stop the game.

England captain, David Platt, made a plea, but for his gesture narrowly missed getting a whack on the head from a flying piece of timber.

The guards waded in, wilding truncheons which, according to a report, they “applied liberally to the skulls of the troublemakers”. And good for them. Venables said it was “an embarrassment”, and Charlton opined he had never seen anything like it before and that the English “should be ashamed of what happened”.

Fifty people were injured, the ref abandoned the match, and subsequent court cases revealed that those responsible for the riot weren’t from anything like deprived backgrounds. Quite the opposite, in fact, several white-collar workers among them.

By then, the decision had been made to allot England the Euro ’96 tournament. There were fears the decision might be rescinded because of what happened at Lansdowne, but luckily for the intended hosts, the result stood.

Two years prior to the Lansdowne louts having their way, Republic of Ireland travelled to Belfast for a clash with Billy Bingham’s Northern Ireland. A draw was all the visitors needed to qualify for the 1994 World Cup finals in America.

The North were out of the running, having suffered a series of defeats, one of them by 3-nil in Dublin. That, however, didn’t stop them going full-blooded in an effort to stop the other green-and-whites from making it across the Atlantic.

It looked good for them as the clock drifted towards 90 minutes, Jimmy Quinn’s goal dividing the sides. Bingham made no efforts to suppress his feelings; his exhortation to the Ulster flag and Union Jack-waving supporters with a clenched fist as he patrolled the sideline let Charlton know there were no favours to be had hard by the Lagan.

Up there with Ray Hougton’s header against England and David O’Leary’s goal in the penalty shoot-out with Romania as the best remembered Irish score, is the Alan McLaughlin equaliser that night in Belfast.

If there were cheers to greet it – and there were – the most raucous were to be heard in pubs, clubs and homes miles away from where it was executed.  Everyone, even the most ardent of Republic’s supporters, knew Windsor Park would be a cold place to be that night, and only the lionhearted travelled.

As one of the team said afterwards, “We couldn’t get out of the place quick enough. I’d say we were back in Dublin within a couple of hours of the final whistle.”

If that was now, could you imagine there being a united front in the bid to have the Euros coming this way? But it’s not now; and if there was betting on it, Inside Track would be laying out a few quid on a Croker whitewash having to be taken out again, the sanctified sod having lines drawn on it similar to those for the Republic of Ireland’s meeting with Wales in March of 2007.