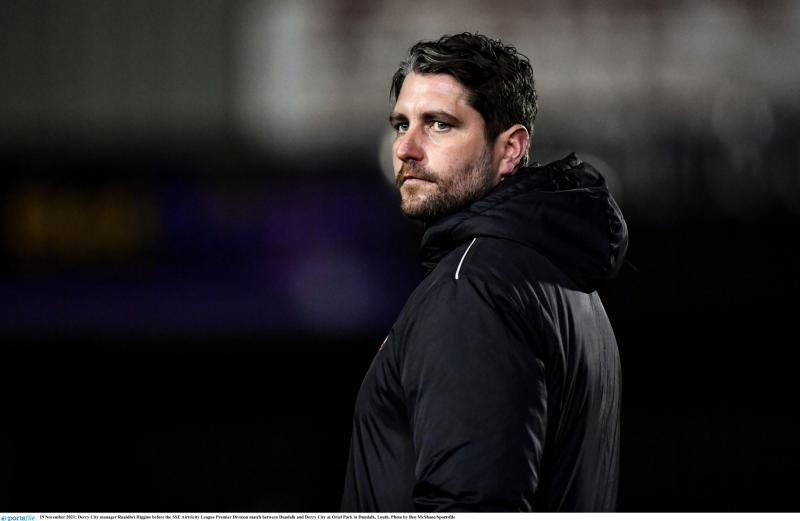 Derry City manager Ruaidhri Higgins is anticipating a special night this coming Friday when his side travel to Dundalk for their SSE Airtricity League opener (kick-off, 7.45pm).

The Candystripes recorded their first win at Oriel Park since 2013 on the final night of the season last November – a result which ultimately secured them a place in Europe.

“The season finished well for us,” Higgins told The Democrat. “We managed to get into Europe which was huge for the city and the football club. Given how we started the season, it was probably a massive achievement for the club and we done it.

“It was a brilliant night for us in Oriel Park. It was a great crowd and a great atmosphere. We know we’re going there Friday against a new management team and my old friend (Stephen O’Donnell), so it’s going to be an interesting evening.”

Derry are being tipped by many to challenge defending champions Shamrock Rovers for the league title this year, but Higgins has played down his own team’s expectations.

“What I would say about the league now is that the gap has probably closed and I think anyone is capable of beating anyone and I think that will be the case this year.

“I think it’s a really exciting league, but for us to bridge a 24-point gap on Shamrock Rovers – is it realistic? It probably isn’t.”

On Friday, Derry will travel to Oriel having nabbed Michael Duffy, Patrick McEleney, Will Patching and Cameron Dummigan from The Lilywhites during the off-season.

“It will be a big night,” said Higgins. “There will be a big away following and I think we’re in for a special night. Regardless of what happens on the night, it’s a long season and both squads and both sets of staff will be ambitious and try and do really well.”

“One thing I can guarantee is that both teams will go at it and try and win the game. No one will sit back and hold on, I can assure you. I know Stevie and he’ll have a go and I’ll have a go. We’ll shake hands at full-time regardless of the result.”