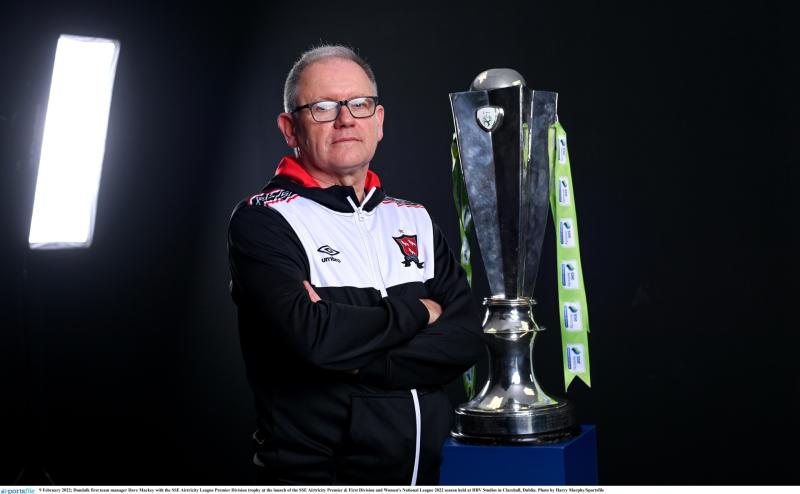 The Lilywhites ended their pre-season programme last week with a 2-1 defeat to Drogheda United – surrendering the Jim Malone Cup for the first time since 2014.

Despite their indifferent preparations for the new campaign, Mackey insists that Dundalk will be more than ready once the competitive action kicks off on Friday.

Speaking to The Democrat, he said: “Things are starting to come together now. We’ve been in pre-season since the 3rd of January. We’re getting more players back into the group. We’ll be looking to be competitive and doing our best to win every game that we play in.

“There’s no guarantees on that, but what we have to do is try to work to be the best we can. We’ll being doing our utmost to develop into a team that’s competitive and hopefully, as the season progresses, we’ll be in contention at the top end of the table.

“I’m really looking forward to it. This is a new experience back with Dundalk again. The start of a league season, a new group, a new management team, excellent people involved, so we’re really focused and determined to do our level best to make the town proud over the coming season.”

The Lilywhites begin the campaign with 12 new players – the most recent addition being Scottish defender Lewis Macari, who has joined the club on loan from Stoke City.

A grandson of ex-Manchester United midfielder Lou Macari, the 20-year-old played the full 90 minutes against Drogheda at right-full and is in line to do the same against Derry.

“We’ve got a good mix,” added Mackey. “We’ve a good core of players who understand and have had success with Dundalk – existing Dundalk players and also players who have come back to the club and that’s important.

“There’s going to be a mix of experience and good young players who have good pedigree and want to show that they can play at a competitive level in a competitive league.

“The important thing will be gelling the team together and the start will be important obviously. We’re looking to improve and develop as a team as the season progresses.

“The development of those younger players will be crucial to our success. I think what you require to play for Dundalk and at this level is not only ability, but you require a character and personality. That’s the type of player that Stephen is looking at and that Dundalk are looking at. Hopefully these players can go on and have a very good season.”

Ahead of Friday’s opener, Dundalk are likely to be without Darragh Leahy after he picked up an injury in the Drogheda game, while John Mountney is also ruled out.

Having signed Michael Duffy, Patrick McEleney, Will Patching and Cameron Dummigan from Dundalk in the winter, Derry are one of the favourites for the league title this year, but Mackey has brushed off the theory that now is a good time to face The Candystripes.

“Every game in this league is going to be difficult. It’s their first game, but it’s our first game as well, so that doesn’t really play into our minds as such. The most important thing from our point of view is that we have to prepare as best as we can and make sure that we’re at our best.

“We’re very much looking forward to it. We’re training in Oriel every day which is fantastic, so we know the environment and we want to make Oriel Park a fortress.

“It’s one game. We want to start well, but this is over 36 games, so it’s a marathon. We’ll have our benchmarks and we know where we will want to be and expect to be. But of course, we want to do the best we can to get a really good result on Friday.”

The Candystripes have been putting up some high scores during an extremely busy preseason schedule for Higgins troops. They notched six goals when taking on First Division outfit Longford Town and five against Irish League side Institute last month.

Just like Dundalk they have played both Drogheda and Waterford, both of which ended in 1-1 draws. The Lilywhites lost both of their encounters 2-1.

Tickets for Friday night’s fixture are now on general sale from the office at Oriel, while the game is also being streamed live on LOI TV – where match passes are priced at €7.