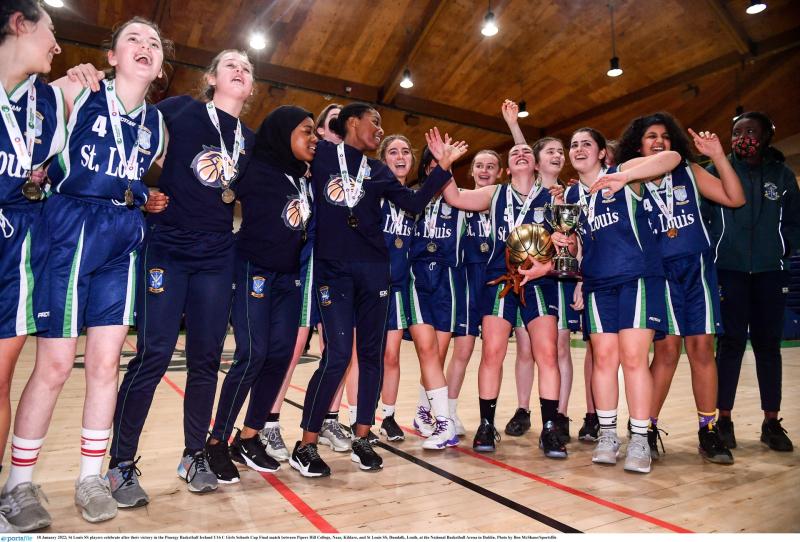 St. Louis are the U16C Girls Pinergy All-Ireland Schools champions after a 57-50 win over Pipers Hill College. They were inspired by MVP Sofia Fernandez Bustos, who finished with 34 points.

The Dundalk school raced to an early 10-point lead. Pipers Hill had just played in the U19C final previously and one of those players involved, Mya Pardy, helped drag her side back into the contest and they trailed 15-12 by the end of the opening quarter.

When Ines Palacio landed her second three pointer for St Louis with three minutes gone in the second quarter, the Louth school had a 27-20 advantage.

But the impressive Stephanie Nnabuihe, who was another playing her second game of the day, helped Pipers Hill into the lead, firstly with a fastbreak and a layup, followed shortly after by another two-pointer, to see the County Kildare outfit hold a 30-29 advantage.

Sofia Fernandez Bustos was proving hard to contain, her layup in the final seconds of the quarter meant it was St Louis who held a 33-30 half-time lead.

She had 21 points by then, with Ines Palacio on eight and Sara Ezquerra Rivas on four. For St Louis, Pardy had 14 points by the break, with Nnabuihe on 12, while Ellie Purcell had hit four points.

A Sara Ezquerra Rives three pointer gave St Louis a 48-39 lead at the end of the third. Their advantage was stretched to 11 points, 52-41, two minutes into the fourth quarter with a fastbreak and layup from Fernadez Bustos.

A Pardy layup for Pipers Hill made it a seven-point game, 55-48, with a little over a minute to go. However, the girls from Dundalk showed great composure to run out the clock while a couple of late free throws helped wrap up a 57-50 victory.