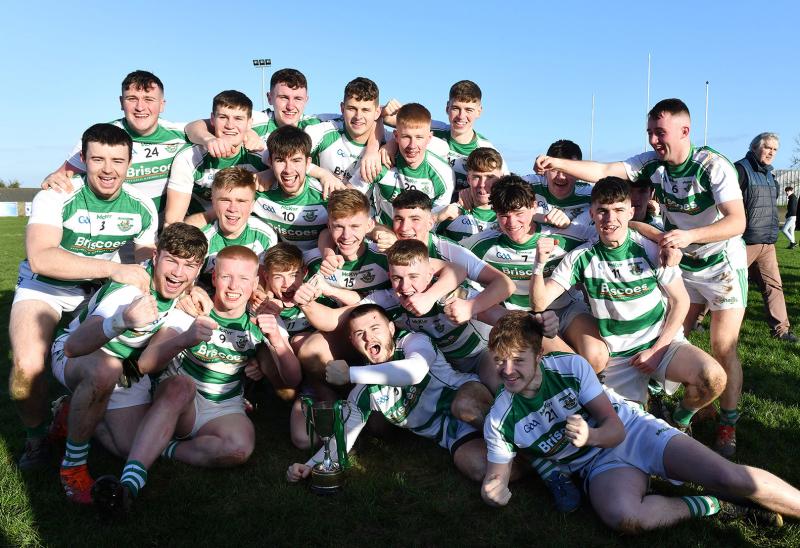 St Fechins capped off what has been a hugely prosperous 2021 season by taking home the Louth Under 20 Football Championship at the expense of the St Joseph’s/ St Mochtas amalgamation in Dunleer. A great way to kick off 2022.

The last 12 or 13 months has seen the Beaulieu outfit pick up trophy after trophy at several levels, with their adult men’s team landing the Intermediate Championship and their hurling outfit finally ending four years of hurt to win the Senior Hurling Championship a few months ago.

The common denominator with those victories was the magnificent exploits of the talented Ryan Walsh and this final was no different, as the dual star was again pivotal, kicking 1-8 from 12 shots over the hour.

Backed up by the impressive Adam O’Neill at centre half back, flanked either side by Neil Hodgins and Mark Holohan, along with the industry and graft of midfielders Eoin Hackett and Cathal O’Reilly and half forwards Eoghan Ryan and John O’Connell, St Fechins proved to be the hungrier team.

They were worthy winners as they had the lead from the first half water break and would not it let go. They turned their opponents over 31 times over the hour.

A delightful kick pass from Ryan Walsh saw Mark Holohan tee up Sean Kerrisk for the opening score of the final, which was met by a seismic roar from a highly vocal Fechins support in Dunleer. Ryan Walsh converted a free moments later, as St Fechins showed they meant business.

St Josephs/ St Mochtas struggled early on. However, they were offered a lifeline when referee David Fedigan awarded them a penalty, which was calmly converted by Jack Barron.

This was quickly followed up by a Craig Lennon score from play in a move involving Barron and Oran McParland, to give the combination side the lead at 1-1 to 0-2 at the first half water break.

St Fechins’ ability to turn the opposition over in possession was a common motif throughout the 60 minutes, and the Drogheda side turned the Joes/Mochtas side over eight times in a second quarter which saw them score 1-3 without reply to take a four point lead into the break.

Another feature of St Fechins’ play was the decisive early ball into Ryan Walsh, and Walsh collected a long kick pass from fellow dual player Sean Kerrisk. He duly left defenders in his wake before slotting the ball past keeper Josh Mackin for a crucial momentum swinging moment in the match.

Two further Walsh frees, along with a score from the excellent Neil Hodgins, gave St Fechins a 1-5 to 1-1 lead at the interval.

Showing a determination which saw them edge their way passed Roche Emmets in the semi-final, St Josephs/ St Mochtas got off to the ideal start in the second half.

A double marked Gabriel Bell found Oran McParland who fired the ball into the top left-hand corner of the net to close the gap to a single point just moments after the restart.

You felt that the amalgamation side needed to kick on and land the next few scores, however St Fechins managed to cool that early fire, when captain John O’Connell landed the next score to edge their lead out to two points.

Jack Barron did land another point for the Joes/Mochtas to keep his side in contention at 1-6 to 2-2 after 41 minutes, however they would only register one more white flag after that through half time sub Conall McCaul.

St Fechins pushed on from here, with Ryan Walsh once again flawless from the place ball with five second half converted frees, while the hardworking Eoghan Ryan and John O’Connell (0-1 each) ensured that there was no doubt about the outcome of this final, as St Fechins added to their impressive trophy cabinet for the 2021 season.